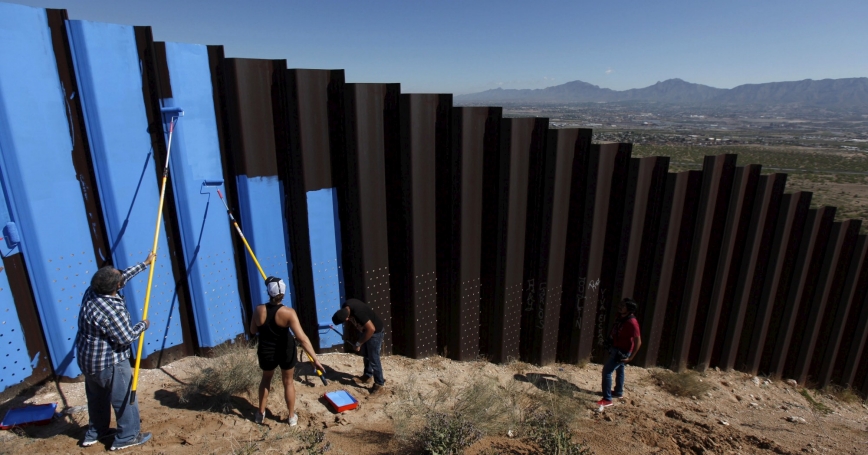 Artist Ana Teresa Fernandez and members of cultural organization Border/Arte paint the fence between Mexico and the U.S. to give it the illusion of transparency in Ciudad Juarez, Mexico, April 9, 2016

Building a wall to keep undocumented immigrants and illicit materials from entering the United States has become a hot topic of discussion in this election year. Yet history suggests that a thin brittle line across a shared land border has little chance of success.

Walls have been a common means of securing borders for centuries. While illegal entry across the U.S. southern border is clearly not a military incursion but instead an economic migration and smuggling problem, perhaps borrowing a few examples from military history might still be instructive. From the Great Wall of China to the French Maginot Line to the Demilitarized Zone on the Korean Peninsula, evidence seems to point to — at least from a narrower military perspective — the ineffectiveness of building “impenetrable” walls. Today, more than a quarter-century after the fall of the Berlin Wall, walls are again being built to stem the flow of refugees across Europe, drawing criticism from many.

Borders are the physical expression of a nation's sovereignty. The nation's borders consist of the land, air and sea ports and approaches through which flow licit and illicit migrants and goods. In total, U.S. borders span 5,500 miles of land to the north, 2,000 miles of land to the south, 95,000 miles of shoreline and over 300 ports of entry. The nearly exclusive focus on the southern-border wall reflects a one-dimensional discussion, which fails to account for the full breadth of border issues facing the United States.

Over time and more prominently since 9/11, America's borders — particularly the southern border — have been reinforced with personnel and technology, including fencing, unmanned aerial systems, mobile radars, aerostats and unattended ground sensors. Over 650 miles of physical barriers have been constructed along the southern border in critical trafficking areas at a cost of over $2.4 billion. While arguably more coverage could be deployed, perhaps the more relevant question is how much additional benefit would more enhancements along the border wall have for U.S. border control?

The answer is, probably not very much. Experience along the U.S. southern border demonstrates that even with fortifications, a wall provides only modest capacity to stop illegal crossings. Determined individuals have demonstrated their ability to rapidly breach the physical barrier using saws, acetylene torches and other tools to cut through the wall within minutes and before patrols can respond. Tunnels, some over a mile long, have been built to smuggle people and narcotics into the United States. Storm drainage systems have served as ready routes for illegal entry.

Building a wall spanning the entire U.S.-Mexico border would have its own negative consequences, including high cost, likely requirement for use of eminent domain to gain access to the property in some locations, and diverting resources away from other border control measures that have a higher probability of success.

Apprehensions along the southern border are down in comparing 2014 and 2015 data (PDF), though the number of unaccompanied minors is growing. Additionally, the number of visa overstays — 500,000 in fiscal year 2015 alone — highlights a larger problem with illegal immigration.

Border security requires a collection of federal, state, local, tribal and territorial governments working together in unison. At the federal level alone, the collaboration at the border includes elements from the Departments of Homeland Security, Health and Human Services, Agriculture, Defense and the intelligence community to name a few. The list expands as issues demand. For example, if there was an ecological, chemical or biological threat, the Environmental Protection Agency would undoubtedly assume an important role. The growing number of states choosing to interpret federal immigration policies — some more and others less restrictive than federal policy — has further complicated the implementation of a national immigration policy.

To improve coordination, Homeland Security's unity of effort initiative has created Joint Task Forces East, West and Investigations, led by the U.S. Coast Guard, Customs and Border Protection and Homeland Security Investigations, respectively. Recent testimony highlighted that the intent of these JTFs is to move from a narrow focus along the border to a layered system of security, enforcement and response measures based on situational awareness, intelligence and information sharing and operational coordination.

International cooperation should be a foundation of this expanded approach as well. The home countries of illegal immigrants serve an important role in seeking to discourage those tempted to breach U.S. borders. Messaging should be clear and unequivocal; if caught, offenders will be swiftly processed and returned to their host nation. Only under clearly defined circumstances will asylum be granted. The processing of undocumented immigrants should be streamlined as well. The immigration court system should be more efficient with more judges and less processing time. In addition to messaging, important international collaboration supporting the return of people to their home nations should continue to be emphasized.

More emphasis should be placed on expanding border security beyond the physical dimension. In this regard, electronic and cyber defenses should stand on an equal footing. For instance, continued and even expanded use of trusted traveler and shipping programs such as Global Entry and Customs-Trade Partnership Against Terrorism should be emphasized. Broader use should be made of technological advances that allow for enhanced targeting of suspect air and sea cargo and individuals. Information sharing should span all levels across government and industry, and more powerful targeting algorithms to identify and prevent border intrusions should be deployed.

The importance of cross-border flows to building communities and economic viability on both sides of the border should be part of the calculus. In all of these efforts, the delicate balance between border security and the legitimate flow of goods and services should be maintained.

This commentary originally appeared on U.S. News & World Report on April 15, 2016. Commentary gives RAND researchers a platform to convey insights based on their professional expertise and often on their peer-reviewed research and analysis.