Five Years After the Death of Osama bin Laden, Is the World Safer? 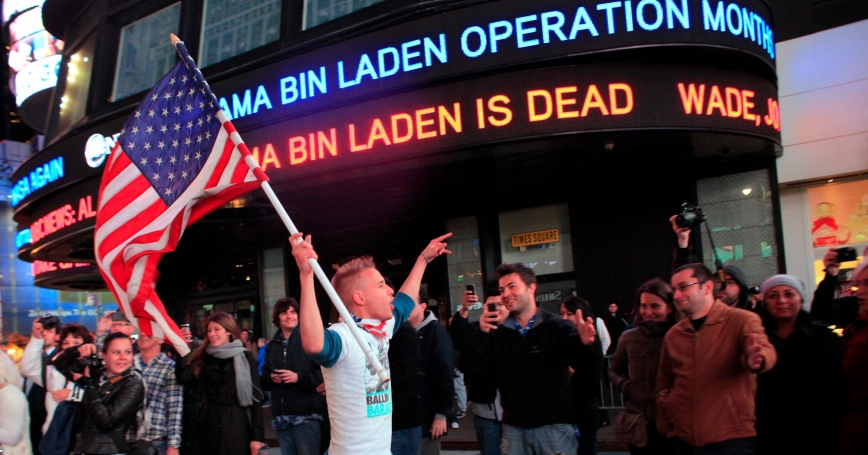 People react to the death of Osama bin Laden in Times Square in New York City, May 2, 2011

Five years ago, U.S. special operations forces killed Osama bin Laden in a raid on his hiding place in Abbottabad, Pakistan. Although al Qaeda had been dispersed from its bases in Afghanistan and its support networks had been largely dismantled, nearly 10 years after the 9/11 attacks al Qaeda was still viewed as a terrorist threat. Bin Laden's death was seen as a strategic blow to the organization.

But what effect did killing bin Laden have on al Qaeda's ability to pursue its jihadist goals? Does “high-value targeting” contribute to counterterrorist strategy more broadly? Aside from the legal and even more profound philosophical debates: Does killing terrorist leaders work?

Today, al Qaeda is still a global enterprise pursuing violent jihad and remains dedicated to attacking its “far enemy,” the United States. Decapitation clearly did not terminate al Qaeda's armed jihad, which, in response to new developments and internal dynamics, morphed into new forms. Meanwhile, high-value targeting continues to be an important component of U.S. counterterrorist strategy. Should it be?

Research draws varying conclusions. Some analyses show that terrorist organizations may be able to replace their losses, as al Qaeda did with Ayman al-Zawahiri, also a long-time jihadist. But leadership is a precious commodity, which high-value targeting degrades — although in some cases the replacements for terrorist leaders killed proved to be more effective than their predecessors.

As a strategic tool, high-value targeting does not simply eliminate terrorist leaders but sends them deeper underground, impedes their ability to communicate, and degrades their ability to function. Obviously, it adversely affects morale. While al Qaeda's terrorist capacity has declined, the loss of bin Laden was just one factor. Many of its most effective operational planners and commanders also have been eliminated; either captured or killed before or since bin Laden's death.

Still, the demise of bin Laden cost al Qaeda its most charismatic and effective communicator. His successor, al-Zawahiri, certainly has the experience and ability to lead al Qaeda, but he lacks bin Laden's moral authority and motivational skills. Since bin Laden's death, Zawahiri may have come to fear that communications can be risky business for terrorist leaders. Over the last five years, Zawahiri has issued fewer than half the number of audio and video messages that he issued in the five years before the raid on Abbottabad.

Osama bin Laden was wary of relationships beyond his immediate control and resisted franchising al Qaeda's operations. Zawahiri has adopted a different course. As a result, the jihadist enterprise is more decentralized. Its organizational survival now heavily depends on its Taliban allies in Afghanistan, on its affiliates, and on its ability to inspire homegrown terrorists.

Decapitation efforts have had a significant negative impact on terrorist organizations but not a decisive effect.

Some studies show that decapitation decreases the number of attacks and success rates. And there are case studies that indicate the violence plummets, but others show that while the frequency of attacks may decrease, their severity does not. Overall, successful decapitation efforts have had a significant negative impact on terrorist organizations and insurgencies but not a decisive effect.

Other case studies show that the elimination of terrorist leaders affected neither the rate of terrorist attacks nor the likelihood of organizational collapse. And however careful the targeting, such strikes can produce civilian casualties, provoke anger, and incite further terrorist attacks in revenge.

The jihadists vowed revenge for bin Laden's death, but there have been no centrally directed attacks in the United States since 2011. In fact, the jihadists weren't gaining many adherents anyway. Local jihadist terrorist plots still occur but, apart from drawing inspiration from al Qaeda's exhortations via the Internet, these have not been connected directly to al Qaeda.

Today's al Qaeda is clearly a diminished threat and the killing of bin Laden certainly contributed to that, but the emergence of the Islamic State has in many ways filled the terrorist void. With thousands of Western nationals in its ranks, the Islamic State supported the most recent terrorist attacks in Paris and Brussels and now poses the bigger immediate threat.

Homegrown terrorists seem indifferent to the division. Some declare their attacks on behalf of al Qaeda (like the assault on the Paris offices of Charlie Hebdo in January 2015), while others declare them to be on behalf of the Islamic State (like one of the attackers in last December's attack in San Bernardino).

Was al Qaeda hurt by the demise of its charismatic leader? Certainly. Is the world a safer place because of it? Probably not.

This commentary originally appeared on The Cipher Brief on May 1, 2016. Commentary gives RAND researchers a platform to convey insights based on their professional expertise and often on their peer-reviewed research and analysis.