In the Event of the Islamic State's Untimely Demise... 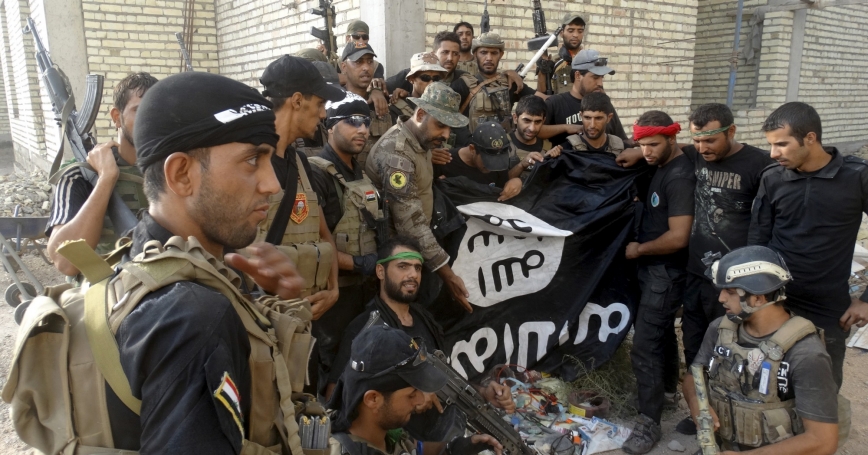 Iraqi security forces hold an ISIS flag that they pulled down at the University of Anbar, in Anbar province, July 26, 2015

The power of the Islamic State is waning. With its loss of Ramadi and Palmyra over the past several months, and the steady advance of U.S.-backed Kurdish fighters in northern Syria and Iraq, the group is shedding territory. It is also losing recruits to casualties and desertions, as its finances are being squeezed by coalition strikes on bulk cash storage sites and oil refineries. Meanwhile, the coalition campaign to eliminate high-value battlefield targets is succeeding.

Yet, defeat does not appear imminent. The Islamic State still controls key territory, including Raqqa, the capital of its caliphate; the Iraqi city of Mosul and large swaths of territory in the surrounding Nineveh province; and hardscrabble Sunni enclaves in Anbar province, such as Fallujah, Hit, and Haditha. Furthermore, though the coalition has deprived the Islamic State of hundreds of millions of dollars, it is likely to find new, creative ways to replenish its diminishing war chest.

For Abu Bakr al-Baghdadi, the leader of the Islamic State, surrender is out of the question. And given the Islamic State leadership's horrific behavior and stated objective of establishing a caliphate governed by sharia, a negotiated settlement is a non-starter. In the past, insurgencies that have come to an end in this way featured moderate leaders, insurgents open to compromise, and governments willing to accept insurgents as legitimate negotiating partners. The Islamic State and its opponents share none of these attributes.

That's why, if they haven't already, the Islamic State's leaders in Raqqa will soon formulate a contingency strategy — a “Plan B” that the West will then be forced to contend with. Here are some of the options they may be considering.

Like successful insurgencies of the past, one option for the Islamic State could be establishing a shadow network of governance and taking the fight underground. Such a network could resemble what the Taliban has already created in Afghanistan — a system where shadow governors rule in sharia courts and often become the preferred method of justice over officials of the Afghan state. This form of governance, in turn, grants the group legitimacy among certain segments of the population.

While this option may be compelling for some in the Islamic State, the group's foreign fighters would not easily survive underground, especially the thousands from Western countries. Even those European nationals of Moroccan or Algerian origin would stand out among native populations, which may be why many of them — including an estimated 20 to 30 percent of the European nationals who went to Syria to fight — reportedly have returned home. Non-European foreign fighters may join other jihadi groups, including Nusra Front, al Qaeda's affiliate in Syria.

On the other hand, it will likely be a long time, if ever, before either Syria or Iraq has stood up effective intelligence and police institutions capable of identifying and capturing underground resistance fighters. And if the local Sunni populations view the armies that defeat the Islamic State as Shiite or Alawite oppressors, the jihadis may still find a sympathetic audience. But the Islamic State's Sunni victims could just as easily turn on their former Islamic State oppressors, seeking revenge for the savagery inflicted upon them.

Moving Islamic State leadership to Libya would be risky. It would signal retreat to the group's supporters.

Alternately, the Islamic State's leaders could flee to another jihadi stronghold, like Libya. While in the short term, this relocation would be a blow to the militant group's credibility since the caliphate narrative has been carefully cultivated, a strategic change of venue could prolong the group's survival.

The Islamic State would still have to battle Libya's disparate tribal militias in order to carve out its own space. It could see this as a worthwhile gamble, betting that President Barack Obama's administration (and its successor) will prefer to avoid opening yet another military front in the ongoing global war on terror.

But moving the Islamic State's central leadership to Libya would be risky. It would signal retreat to the group's supporters. It would also give up the group's claim on Syria, which is closely linked with apocalyptic prophesies about fighting in al-Sham, including the northern town of Dabiq, where the jihadis believe the final battle of good versus evil will occur.

Robbed of its territory in the heart of the Middle East, the Islamic State would no longer be a unified state with a caliphate based in Iraq and Syria. Instead, it would resemble an archipelago of affiliates and offshoots spread across the region, from the Levant to North Africa. But it can remain a state of mind. It would be a mistake to assume that a geographically dispersed Islamic State would not be able to maintain the loyalty of its fighters.

The Islamic State's Plan B might also include a desperate attack to demoralize and distract its foes. The options could include throwing everything into an all-out military offensive, like Nazi Germany's Ardennes offensive, which led to the Battle of Bulge in 1944, or the Tet offensive in 1968, which both devastated the Viet Cong and shattered America's political will.

An all-out attack by the Islamic State could involve the assassination of Syrian President Bashar al-Assad, a campaign of terrorism in Baghdad or Damascus, or a spectacular attack designed to draw the United States or Europe further into the war, thereby changing the dynamics of the conflict.

Baghdadi might also consider a major assault on Mecca or Riyadh, a capstone to the series of attacks he has recently ordered in Saudi Arabia. To demonstrate to the group's followers that the caliphate remains a potent force and its organization is still virulent, Plan B might also include efforts to destabilize Jordan or Lebanon, an attack against Israel, or a campaign in the northern Caucasus to punish Moscow for its involvement in Syria.

The military costs of such an attack would be significant, but it could change the dynamics of the conflict. A desperate offensive could cost the Islamic State's leaders in Raqqa a significant portion of their fighters. But it would remind the world — and potential recruits — that the Islamic State remains a force to be reckoned with.

Avoiding the Fate of al Qaeda

Whatever happens to the Islamic State, few doubt that it will remain a powerful psychological force.

Whatever happens to the Islamic State, few doubt that it will remain a powerful psychological force. But if its fighters scatter abroad, we may see a replay of al Qaeda's fragmentation, where key operatives scattered to Yemen, North Africa, Syria, and Iraq after Taliban rule collapsed in Afghanistan. This atomization considerably reduced the viability of the core al Qaeda in Pakistan, while injecting new life into its affiliates abroad.

This would be undesirable for Baghdadi. It could render him a distant voice in an undisclosed location, exhorting others to fight, like al Qaeda leader Ayman al-Zawahiri — a theoretical commander that Baghdadi himself has ignored.

Various splinters of al Qaeda and the Islamic State, despite their rivalry, could also conceivably fuse together, while allowing others to remain separate entities. A fractured Islamic State could end up reinforcing existing terrorist groups, like al-Shabab in Africa or Salafi groups in the Sinai, as shock troops in their own more parochial conflicts.

From the Horn of Africa to South Asia, there are already numerous examples of jihadis and factions of jihadi groups migrating away from al Qaeda and toward the Islamic State. In October 2014, six high-ranking members of the Pakistani Taliban declared their loyalty to the Islamic State. A year later, a prominent faction of al-Shabab led by Abdul Qadir Mumin did the same. Ultimately, there are more similarities than differences between the Islamic State and al Qaeda, especially where ideology is concerned.

Can the Islamic State, which subsists on plunder, survive financially without territory? Will wealthy donors from the Gulf — hardcore proponents of Wahhabism and Salafism — play a bigger role in the group? These are two of the trickier questions, especially as the Islamic State has largely eschewed external state sponsorship and wealthy donors. But without territorial control, its ability to extort funds from those under its authority decreases substantially. Criminal activity in the form of kidnapping for ransom, robbery, smuggling, and trafficking would likely be less lucrative.

As the Islamic State's caliphate crumbles, its leadership will likely be concerned with protecting itself, improving plummeting morale, and drawing recruits while maintaining its market share of the jihadi universe. But as the chief executive officer of any corporation knows, when a company is about to be acquired or merged with another entity, the internal atmosphere can grow desperate. Individuals abandon a teamwork ethos to focus on individual survival.

So it may be with the Islamic State. Baghdadi may have his preferred plan, but all may not agree. The rank and file may be making individual calculations. After all, the Islamic State was borne of the split within al Qaeda — its leaders were never keen to take direction from those they disagreed with, especially on matters of tactics or strategy.

Whichever course of action the Islamic State pursues, its Plan B is likely a closely guarded secret. This, in and of itself, could breed further mistrust among the rank and file, given recent leaks of a list of names of Islamic State fighters. That could make its leadership more paranoid than ever.

There also may be differences of opinion at the top. Baghdadi's lieutenants could turn on him. It's hard to maintain loyalty and impose discipline while losing.

Whether the group goes underground, relocates to another area, or stages a series of spectacular attacks, the United States and its allies must be prepared to counter it at every turn. The West should have no illusion that the Islamic State will simply slump into defeat. Instead, it must focus on thwarting the group's Plan B.

Brian Michael Jenkins is a senior adviser to the president of the nonprofit, nonpartisan RAND Corporation and author of numerous books, reports and articles on terrorism-related topics, including How the Current Conflicts Are Shaping the Future of Syria and Iraq. Colin P. Clarke is an associate political scientist at RAND.

This commentary originally appeared on Foreign Policy on May 11, 2016. Commentary gives RAND researchers a platform to convey insights based on their professional expertise and often on their peer-reviewed research and analysis.