Islamic State May Be Down, but It's Far from Out 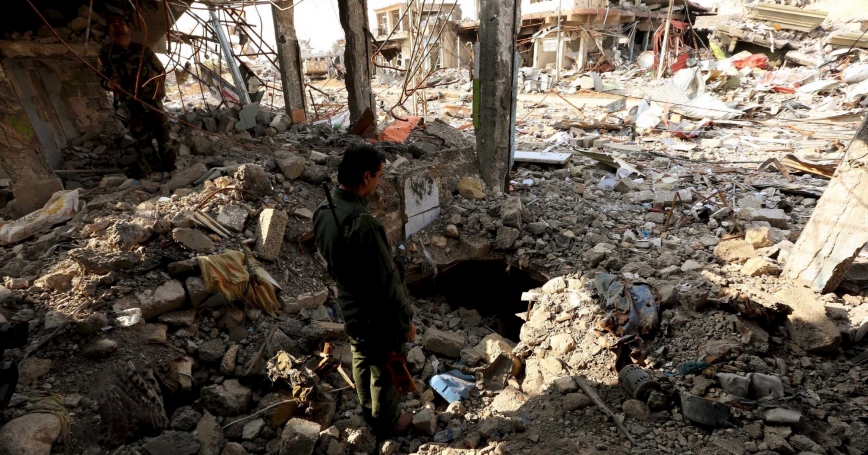 A member of the Peshmerga forces inspects a tunnel used by Islamic State militants in the town of Sinjar, Iraq

Many experts are now speculating that Islamic State is experiencing its death knell. It is losing territory, its finances are being drained and the number of foreign fighters recruited has reportedly down to a trickle, dropped by as much as 90 percent from a high of 2,000 a month in the past year. Each week, the U.S.-led coalition's campaign to eliminate high-value targets seems to be achieving more of its objectives. In addition, substantial numbers of its fighters are defecting, especially from Syria.

Yet the recent reversals might only force Islamic State to adapt its campaign of irregular warfare — as other militant groups, including al Qaeda, have done. With foreign fighters unable to reach the battlefield, for example, Islamic State leaders could instruct would-be jihadists to remain home and launch attacks there.

This would not bode well for predictions of the group's demise. Research shows that the median length of an insurgency is 10 years — and the greater the number of foreign nations involved, the more likely the insurgency will continue. The fight against Islamic State, according to historic trends, is only in its infancy.

On paper, Islamic State's loss of territory, money and recruits would seem to demonstrate significant progress by the U.S.-led coalition. But wars aren't fought on paper. If there is one accepted truism in the battle against Islamic State, it is that the group's leaders intend to fight to the death to establish an Islamic caliphate.

This is not the first time the core of this group has adapted to changing circumstances. Islamic State is the progeny of al Qaeda in Iraq, perhaps the most ambitious of the al Qaeda offshoots and one that owes its violent legacy to the group's founder, the Jordanian Abu Musab al-Zarqawi. Some iteration of the group has existed for more than a decade, despite significant losses to U.S.-led coalitions following the war in Iraq and the current campaign against the group.

So it is far too early to celebrate. The conflict in Syria, of which Islamic State is just one of several violent non-state actors — along with Hezbollah, al-Nusra and others — is only a few years old. It involves a significant intervention by forces from the United States, Russia, Iran, Turkey and Saudi Arabia, as well as varying degrees of meddling by other Gulf countries including Qatar, Kuwait and the United Arab Emirates.

Yet it is reasonable to expect that Islamic State will continue as a coherent organization as it adapts to the ebb and flow of conflict. Its recent losses should be viewed in the context of a longer struggle. Coalition wins are ephemeral, according to Islamic State leaders, and viewed as prologue to future fighting. Whether this fighting is conventional, sporadic attacks or low-intensity insurgency remains to be seen. But how this conflict unfolds largely depends on how Islamic State responds to changes in its operational environment.

Islamic State leaders could decide, for example, to instruct foreign recruits to remain in their native lands and conduct attacks there. There would be no need to dispatch fighters from Iraq and Syria to Europe — as the group did with the Paris attacks in November and the Brussels bombings in March.

In addition, it would allow aspiring jihadists to potentially link up with fighters Islamic State claims have already been sent as sleeper cells to several European countries, including Germany, Italy and Britain. (Just this weekend, a message purporting to come from an Islamic State spokesman called on followers to attack the United States and Europe during the coming holy month of Ramadan.)

Conducting a spectacular attack on European or U.S. soil could serve to rally Islamic State recruits, improve morale and score a major propaganda victory for the caliphate. It would also fit the pattern the group has laid out — responding to territorial and personnel losses with aggression, both within and outside of its immediate region.

In any case, requiring eager recruits to travel to Syria before returning to stage terror attacks in their homelands comes with trade-offs. Key figures in the Paris and Brussels attacks traveled back and forth between Europe and Syria. But when operatives return from known battlefields, they increase the risks of being detected by Western intelligence and law enforcement authorities.

Islamic State would clearly prefer that members have training and combat experience — in particular, instructions from its logisticians and bomb-makers. Technical expertise can be difficult to transfer in writing and is usually acquired though extended apprenticeships. This means highly skilled mentors work with new recruits to transfer specialized knowledge.

As Dzhokhar and Tamerlan Tsarnaev demonstrated with the Boston Marathon bombings, young militants can successfully build lethal explosives by following instructions available on the internet. Still, Islamic State is trying to have its recruits get hands-on experience to mitigate the chances of failure.

Another possible Islamic State response would be to disperse its forces throughout the globe, sending fighters to failed states or conflict zones throughout the Middle East, North Africa and South Asia. There is already evidence it is building affiliates in Libya, the Sinai Peninsula in Egypt, Bangladesh and several other countries, including a growing presence in Saudi Arabia.

Given that the group has already established operational hubs in these areas, shifting its focus out of Syria and Iraq, however temporarily, would allow the group to consolidate and evade the coalition's surveillance systems in the two countries.

For the coalition to respond in kind would require substantial effort. The assembled forces would likely need to shift massive amounts of resources to another conflict zone. Washington, as well as its allies, might be unwilling to expend this major expense and effort.

Neither of these changes — shifting attacks overseas or developing other hubs of operations — would signal Islamic State's demise. They would also not be good news for the coalition.

It is important for Washington and its allies not to become overly complacent with the status quo in the Middle East conflict. Even successful counterinsurgent practices, once adopted, must be maintained nearly six years, on average, if they are to prevail. In a fight against an organization like Islamic State, that can seem like an eternity.

Note: This commentary originally misstated the average number of years that counterinsurgent practices must be maintained to be successful. It is six years, not four-and-a-half.

This commentary originally appeared on Reuters on May 23, 2016. Commentary gives RAND researchers a platform to convey insights based on their professional expertise and often on their peer-reviewed research and analysis.