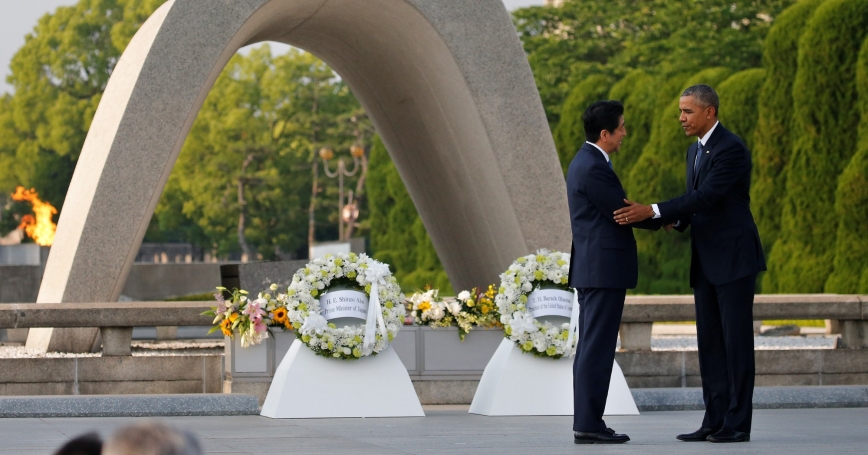 U.S. President Barack Obama and Japanese Prime Minister Shinzo Abe after they laid wreaths in front of a cenotaph at Hiroshima Peace Memorial Park, Japan, May 27, 2016

Against the backdrop of an increasingly assertive China and a highly-provocative North Korea, President Barack Obama attended the G-7 summit in Ise-Shima, followed by a personal trip to Hiroshima, where he was accompanied by Japanese Prime Minister Shinzo Abe. In what was sure to be his last official trip to Japan, the visit was an opportunity for Obama to reinforce the substantial momentum that he and his Japanese counterparts have brought to the relationship over the past eight years.

At the same time, Washington and Tokyo have moved to actively shape and reinforce the values, norms, institutions, and regional order that have served to enable the Asia-Pacific to emerge as an engine of growth and bastion of freedom and democracy over the past nearly 40 years. Forecasting where the relationship will head after Obama leaves office requires understanding three key points.

First, while there has been outside criticism of Japan's security policies in recent years, this has mostly come from China, which insists that anything Japan does in the defense realm is inherently illegitimate and aimed at “undoing the victories of the anti-fascist war.” Despite this Chinese talking point, which has enjoyed widespread acceptance in some corners of the Western media, Japan is not “re-militarizing,” a phrase that is both inaccurate and misleading. Japan has had Self-Defense Forces for decades and, like all countries, retains the inherent right of individual and collective self-defense.

Moreover, while neighboring China's military budgets have ballooned by double-digits for more than two decades, Japan has largely maintained the one percent level of defense spending and the defensively-oriented military posture that it has had since the early 1990s. While North Korea proceeds with development of a diversified nuclear and ballistic missile complex, Japan has seen a growing share of its own defense spending go towards personnel costs and maintenance. As its communist and authoritarian neighbors increasingly seek the capacity to hold at risk the status quo powers of Japan, South Korea, Taiwan, and the United States, Japan has not sought to field power projection capabilities. Instead, it has focused on layered missile defenses that would seek to frustrate any efforts to coerce it by using missiles and has only recently begun developing a small-scale amphibious force to defend or retake its remote islands if they were seized by an adversary.

Second, contrary to interpretations that unfairly and inaccurately characterize Japan as a “free-rider” or “cheap-rider” at the expense of the United States, the country in fact pays most of the costs of hosting U.S. forces and, as a consequence, it is cheaper for the United States to base out of Japan than it would be to bring U.S. forces home to facilities in the United States. Additionally, U.S. forces in Japan are integral to the defense of U.S. ally South Korea and would also be a critical part of any effort to defend Taiwan were China to attempt to attack or coerce its neighbor.

In support of a greater regional role, Japan has taken a number of steps that have made the alliance even more flexible and valuable in recent years, including establishing a National Security Council and passing a National Security Strategy. Tokyo has also articulated a vision of its role in the regional order premised on making proactive contributions to peace through efforts aimed at building partner capacity among regional states in Southeast Asia, including through the use of “strategic official development assistance” and liberalized rules permitting the export of defense articles.

Third, a number of critically important next steps remain to be taken. With China, Russia, and North Korea pressing ahead with efforts aimed at remaking the international order to their liking using coercion and military force, Japan will need to make additional reforms to its intelligence gathering, analysis, and dissemination apparatus; make further improvements to its space-based intelligence, surveillance, and reconnaissance capabilities; procure additional missile defenses; invest more in resiliency and reconstitution capabilities for its airfields and naval installations; continue to work at improving jointness among its services and with its U.S. ally; refocus its defense industrial export drive in the wake of the failure to land a submarine export contract with close partner Australia; fully resource and execute its plans to shift assets and attention to the defense of the country's Southwest Island chain; and decide whether it needs its own offensive capabilities in order to enhance deterrence through an ability to punish those who might strike it.

It will also need to work to improve diplomatic ties with Seoul so it can conclude a bilateral military intelligence-sharing agreement with South Korea. And though Japan's defense budgets are unlikely to trend upwards dramatically, it will be important to sustain the Abe administration's commitment to continued measured growth in military spending to meet the country's defense needs, even as Tokyo seeks to squeeze further efficiencies out of its existing military capabilities.

Collectively, the reforms Japan has undertaken have enabled it to cooperate with the United States in new domains, giving it new capabilities to resist armed and paramilitary coercion and empowering it to play a more active role in shaping the regional Indo-Asia-Pacific security environment in ways that are stability-enhancing. Although the legacies of authoritarian militarist rule, wartime defeat, and occupation continue to shape substantial parts of Japan's national debate on defense affairs, a cohort of serious, patriotic, and most importantly, democratically-oriented Japanese politicians and thought-leaders from across the political spectrum are working to ensure that the country reshapes its policies in a direction that will keep the country safe and position it to further support and benefit from President Obama's “rebalance” to the Asia-Pacific.

In light of recent actions by Russia, North Korea, and China, Tokyo is sure to continue to emphasize the importance of the alliance in the years ahead. As one former leading Japanese ambassador has noted, the greatest source of anxiety for Tokyo today stems from calls by some in the United States to reduce or terminate the alliance system that has preserved the peace, enabled prosperity, and underwritten the spread of a rule of law-based liberal democratic order in the Asia-Pacific over the past several decades. If President Obama can find ways to further enhance U.S.-Japan security cooperation and deepen the two nations' commitments to each other and to the existing international order, his visit will make a lasting contribution to freedom, development, and global peace.

This commentary originally appeared on The Cipher Brief on May 31, 2016. Commentary gives RAND researchers a platform to convey insights based on their professional expertise and often on their peer-reviewed research and analysis.