A Brief History of the Assault Rifle 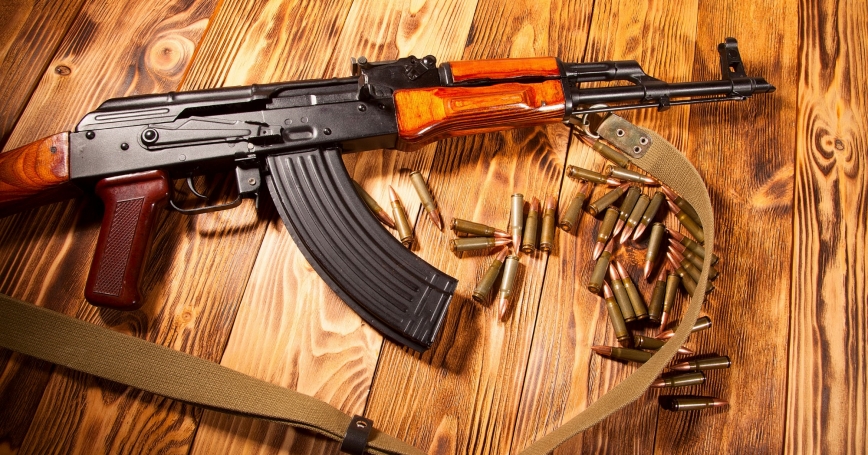 Amid the controversy over assault rifles—and specifically, the debate over whether or not guns like the semi-automatic weapon Omar Mateen used to commit the recent massacre in Orlando should be considered “assault weapons” or singled out for restrictions—some consideration of the original design and development of assault weapons is useful.

The assault rifle is a class of weapon that emerged in the middle of the last century to meet the needs of combat soldiers on the modern battlefield, where the level of violence had reached such heights that an entirely new way of fighting had emerged, one for which the existing weapons were a poor match. The name “assault rifle” is believed to have been coined by Adolf Hitler. Toward the end of World War II, the story goes, Hitler hailed his army's new wonder weapon by insisting that it be called not by the technical name given it by its developers, the Machinenpistole (the German name for a submachine gun), but rather something that made for better propaganda copy. A Sturmgewehr, he called the new gun: a “storm” or “assault” weapon.

At the beginning of the 19th century, soldiers in Europe fought battles exposed in full view of the enemy. Often they moved, stood, or charged in lines or in close formations, in coordination with cavalry and artillery, mostly in the open. They could do this and have a reasonable chance of surviving in part because guns were relatively inaccurate, had short ranges, and could only be fired slowly.

In response, weapons developers in Europe and America focused on making guns more accurate up to greater distances. First they found ways to make rifled weapons easier to load from the front. Next they found efficient ways to load guns from the rear—the breach—rather than ramming bullets down the muzzle of the gun. Breach loading guns can be loaded faster, and the technology made it possible to develop a magazine that held multiple bullets at the ready. These types of battle rifles culminated with the guns carried by the vast majority of foot soldiers in the First and Second World Wars, weapons like the American Springfield 1903 and M-1 Garand, or the German Karabiner 98K: long and heavy guns that fired large bullets from large cartridges and had barrels that were 24 inches long. The long barrels and big ammunition meant that these types of guns could shoot accurately at tremendous distances. Both also packed considerable punch: their bullets left the barrel at roughly 2,800 feet per second.

By the late 19th century, these new guns, combined with machine guns, which were introduced in the 1880s, and significantly better artillery generated a storm of steel so lethal that soldiers had to protect themselves behind cover or in trenches. As a result, soldiers all but disappeared from sight on the battlefield. Tactics changed to hugging the terrain and firing a lot of bullets at an area in the attempt to stop the enemy from firing back, so that other soldiers could move to a better position. Or, there were quick and bloody skirmishes at close range. There was little for soldiers to see, and often they could not expose themselves to take an aimed shot.

Soldiers wanted a weapon that could fire on automatic other than machine guns, which still fired big-rifle ammunition and demanded something big and heavy to absorb the recoil.

In this context, big rifles were overpowered and cumbersome. They also didn't fire fast or long enough. Soldiers wanted a weapon that could fire on automatic other than machine guns, which still fired big-rifle ammunition and demanded something big and heavy to absorb the recoil. One solution that became popular during the First World War was the submachine gun, which is a machine gun that fires pistol ammunition rather than rifle ammunition. This smaller, weaker ammo made it possible to have a smaller, lighter gun, but the tradeoff was that they had poor range and offered little “penetrating power.” Many armies treated big rifles and submachine guns as complementary weapons, and squads carried both into battle.

A better solution was an “intermediate” round that was neither too big nor too little. Generally speaking, the less powerful the ammunition, the lighter and smaller the gun, and the easier to fire it accurately even when firing automatically. Smaller ammunition means one could pack more into a magazine and carry more into combat, too. The ammunition could not, however, be as weak as pistol ammunition. It had to be big enough and powerful enough to be sufficiently accurate and lethal at useful distances.

The ammunition the Germans developed for what would become the first mass-produced assault rifle, the Sturmgewehr (StG) 44, was the same caliber as the standard German rifle ammunition (7.98 mm) but with a case that was considerably shorter: 33 mm versus 57 mm. This meant that while the bullet was the same size, it was propelled by a smaller amount of gunpowder. The gun kicked less and was easier to control, even when set to automatic, and fired at a rate of 600 bullets per minute. The 98K it was intended to replace was not even semi-automatic. The StG 44 was not lighter than the 98k, but it had a barrel that, at 16.5 inches, was about half a foot shorter. It also had a 30-round magazine, compared to the 98K's five-round magazine. Of course, the StG 44 packed less punch than the 98K and was not as accurate at extreme distances, but the Germans understood that the StG 44 was deadly enough. Fortunately for the Allies, the Germans did not issue many StG 44s until late in 1944, at which point having a better gun wasn't enough to turn the tide of the war.

Other countries quickly developed similar weapons. The Soviets, impressed with the StG 44, developed their own version of the gun, called the AK-47. The British took a different approach with the EM-2, which had an even smaller cartridge (.280 caliber, or 7 x 33 mm). The U.S. was more conservative, to the point that the nation forced the British to abandon the EM-2 because the U.S. wanted NATO to accept as its standard ammunition a slightly modified version of the venerable 7.62 x 63mm “thirty-ought-six” used in the M-1, a new round that measured 7.62 x 51 mm.

Still, the Army wanted something better than the old M-1 rifle, which opened the door in the 1950s to new ideas. Two organizations within the military conducted research that helped undermine Army orthodoxy: the Operations Research Office (ORO) and the Ballistics Research Laboratory (BRL). ORO studied the Korean War and came to the same conclusion the Germans had during World War I: Soldiers mostly shot at targets much closer than what they were trained to shoot at and what their guns were capable of hitting. Few even saw targets or aimed; instead, they conducted “area fire,” which means they fired as quickly as possible at an area to suppress the enemy. ORO also determined that in combat the best marksmen fired no better than the worst, and firing quickly was more important than firing accurately, within reason. The BRL analyzed ballistics tests and concluded that the lethality of a bullet had more to do with its speed than with its mass. If a small .22 (5.56 mm) caliber bullet went fast enough, it was as deadly as the NATO 7.62 x 51 mm round—and more accurate. Nonetheless, the Army favored a big orthodox rifle, the M-14, which fired the NATO 7.62 round and had a 20-round magazine. It could fire on automatic, but because of the ammunition it was difficult to control on that setting, and most kept it set at semi-automatic to avoid wasting ammunition.

In 1957 the Army's Infantry Board invited a civilian engineer named Eugene M. Stoner to review its data. Stoner used the information to develop the AR-15, which he brought to Fort Benning in 1958 for trials. His new gun fired a small cartridge (.223 or 5.56 x 45 mm) very fast, at 3,150 feet per second, and it had a shorter barrel than that of the M-14. It could be fired, controllably, on automatic. The Army tested the AR-15 and found it superior to the M-14 at all but extreme distances and also lighter and easier to control, but remained committed to the M-14. In Vietnam, however, M-14-equipped troops facing AK-47-equipped opponents found themselves in need of a gun that could carry more rounds in its magazine and fire on full automatic. By that time, some American soldiers had been equipped with AR-15s—which the Army named the M-16—and they asked for more. Secretary of Defense Robert McNamara prodded the Army into replacing the M-14 with the M-16, and by 1968, the M-16 had become its standard infantry weapon.

Recently American military has been transitioning to the M-4, which essentially is an M-16 with a shorter barrel. Some versions fire three-round bursts rather than full automatic. The M-4 is less accurate at long distances, but the 21st-century battlefield is more urban, and soldiers spend more time getting in and out of vehicles, so the military is willing to accept the loss of a little accuracy for greater ease of use in confined spaces. The gun is also easier to use for smaller people, so better for many female soldiers.

Virtually all the world's armies now use assault rifles, most of which are variants of the AK-47 or the AR-15. They differ in the details—slightly smaller bullets or slightly bigger ones, longer or shorter barrels, and so forth—which reflect different schools of thought regarding the right sweet spot between power and ease, between full-size rifle cartridges and pistol ammunition. There are also different mechanical approaches to things like how the gun uses the gas from a fired round to reload. The basic idea, though, has remained the same since Hitler gave the weapon its name. Other guns are technically more lethal, and of course different guns are better suited for different purposes. Assault rifles were designed for fighting wars.

Michael Shurkin is a senior political scientist at RAND Corporation.

This commentary originally appeared on TheAtlantic.com on June 30, 2016.