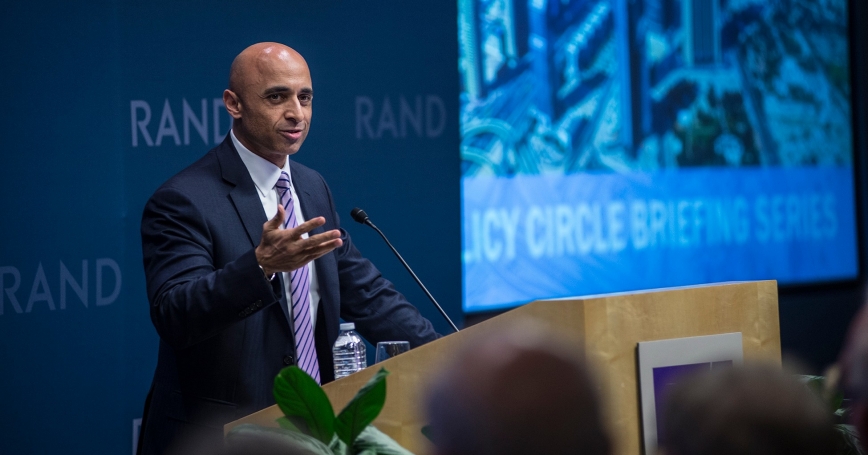 To United Arab Emirates Ambassador Yousef Al Otaiba, the Middle East is a place of both peril and promise. Although, from his vantage point, Iran and Islamic extremists pose a threat to the entire region, the next generation of young people is spreading a culture of optimism, opportunity, and openness, the ambassador said.

On June 1 at RAND's Santa Monica headquarters, Al Otaiba discussed what he saw as the UAE's progress as both an emerging power in the Middle East as well as a reliable ally of the West.

The Emirates has diversified its economy over the past two decades so that oil and gas make up just 30 percent of gross domestic product, Al Otaiba said, and it is the largest U.S. export partner in the Arab world despite being a country of just 10 million people. Al Otaiba mentioned that the Emirates has played a leading role in a fight against Iranian-backed forces in Yemen, and he also noted that it joined the coalitions in Afghanistan, Iraq, and Syria.

But what Al Otaiba most sought to convey was his sense of optimism about the next generation of Middle Easterners. Last week he gave the commencement address to 130 students from 58 countries graduating from New York University Abu Dhabi. The university has already produced six Rhodes scholars from its three graduating classes, he said.

“These are the world's best and brightest. They could have attended the best schools in their own countries. But instead they challenged tradition and opted to live and learn among the most diverse student body in the world,” he said.

Al Otaiba relayed an inspirational story told by President Clinton about his giving the first commencement address at NYU Abu Dhabi in 2014. Clinton was to make awards to two teams that had won a university competition: On one were students from India and Pakistan, and on the other were youths from China and Taiwan. Clinton asked if the students were sure they wanted to be photographed together for fear of reactions back home. “They said,'We're so over that stuff. That stuff doesn't matter.' Instilling that in young people is the only way we get out of these problems,” Al Otaiba said.

“When I look ahead in the region, I see more Rhodes scholars and fewer terrorist recruits,” Al Otaiba said. “More Mars missions and fewer ballistic missiles, more women leaders and fewer Jihadi Janes, more online start-ups and fewer extremist websites. An Islam of peace and inclusion, not of extremes. In the UAE, this is our way forward.”

In a wide-ranging address and Q&A, Al Otaiba took on other topics:

The UAE supported the nuclear deal but remains disappointed, he said. “The U.S. continues to identify Iran as the leading state sponsor of terror. In Gaza, Iraq, Bahrain, Lebanon, among others, Iran continues to fund and arm radical and subversive groups. Last December, Iran fired unguided rockets dangerously close to a U.S. aircraft carrier. In October, November, and again in March, Iran conducted ballistic-missile tests in violation of UN Security Council resolutions. Iran has clearly rejected the promise of change.” 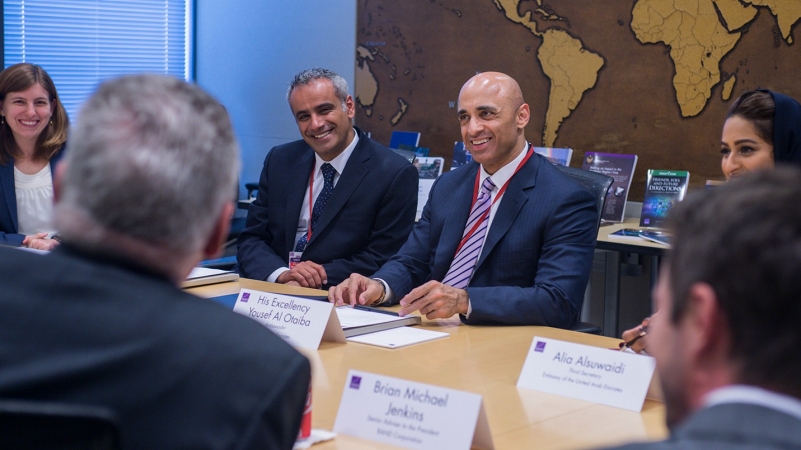 Social Media and the Perception of Islam

Asked about the implications of Israel's plans to open in Abu Dhabi a diplomatic mission that will officially be accredited to the UN's International Renewable Energy Agency, Al Otaiba said: “Israel is part of our region… We have no problem with Israel being part of a multilateral, UN-mandated organization. The question I often get is what about UAE's relationship with Israel? When are you going to normalize relations? And my answer is very simple: As soon as there is a Palestinian deal. That's when the entire Arab League will be able to normalize their relationship with Israel the day after.”