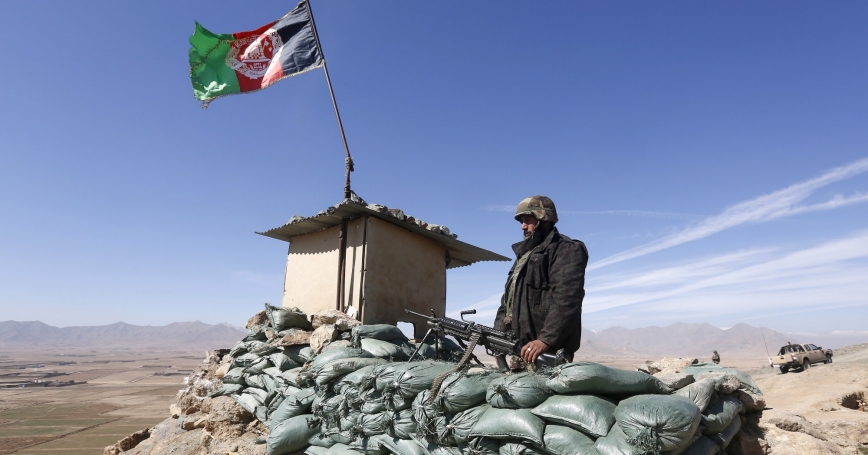 The killing of Taliban leader Akhtar Mohammad Mansour in May 2016 by a U.S. drone strike in Baluchistan, Pakistan raised hopes in Washington and Kabul that the tide might be turning in Afghanistan. U.S. President Barack Obama remarked that the “Taliban should seize the opportunity to pursue the only real path for ending this long conflict—joining the Afghan government in a reconciliation process that leads to lasting peace and stability.” Others argued that the Taliban might be significantly weakened by Mansour's death. “There will be a major change in the situation of the Taliban,” noted Abdullah Abdullah, Afghanistan's chief executive officer. “It is a huge blow.”

The U.S. strike was notable in several respects. It was one of the few times since 2001 that the United States had targeted Taliban leaders in Pakistan. It was also the first attack carried out by a U.S. drone in the country's Baluchistan Province, where Islamabad had previously forbidden U.S. strikes and where some members of the Taliban's senior leadership council, which Mansour headed, live in relative freedom. The fact that Pakistani officials did not vehemently object to the U.S. attack, as they did to the 2011 raid on Osama bin Laden's compound, suggests that Islamabad at least tacitly approved of the strike against Mansour. Mansour's death, however, is unlikely to transform the conflict in Afghanistan or improve the prospects for a deal between Kabul and the Taliban. In the coming months, the United States' presence in the country will be as important as ever.

Trouble at the Top

Afghanistan's internal political divisions are probably the most serious impediment to further progress against the Taliban. Widespread corruption, intra-elite political competition, poor economic performance, and weak governance continue to plague the country. Afghan President Ashraf Ghani has repeatedly clashed with the Afghan parliament over such issues as election reform and reconciliation with the Taliban and has even failed to secure appointments for some critical positions, such as minister of defense.

Some of the biggest fissures among Afghan officials concern the U.S.-brokered political agreement that created the ruling National Unity Government in 2014. The deal managed to temporarily paper over the divisions among the country's competing factions by granting Ghani the presidency and Abdullah, a rival, the newly created position of chief executive officer. Today, the parliamentary and district council elections required by the agreement seem a long way off: Afghanistan will likely postpone them until at least 2017, thanks to disagreements among Afghan officials about electoral reform. Some political elites, including many of Abdullah's supporters, argue that the country's election commission lacks legitimacy because of its handling of the contested 2014 elections and that it should be reformed before a vote is held. As for the reform of Afghanistan's constitution and the establishment of a prime ministership to replace the office of the chief executive—both goals that the 2014 deal stipulated would be implemented by a loya jirga, or grand assembly of elders—they are also unlikely to occur this year.

At the popular level, too, Afghans are angry with their government. A November 2015 Asia Foundation study found that 57 percent of Afghans believed that their country was moving in the wrong direction because of insecurity, unemployment, corruption, and other factors. As long as these grievances exist, there will be popular support for anti-government forces such as the Taliban, and the cohesion and loyalty of Afghanistan's security forces will be tested.

The Taliban, on the other hand, appears to have maintained a measure of internal unity despite the death of its leader. The militants quickly replaced Mansour with Haibatullah Akhundzada, a former member of the late Taliban leader Mullah Omar's inner circle who had served as the head of the Taliban's religious shura, or consultative council, since 2011. Flanking Akhundzada are two deputies: Sirajuddin Haqqani, the son of the legendary mujahideen commander Jalaluddin Haqqani and a competent military leader in his own right, and Yaqub Omar, Omar's eldest son. This triumvirate possesses a powerful combination of religious, military, and hereditary legitimacy.

As for its ability to carry out attacks, the Taliban's sanctuary in western Pakistan allows these leaders to oversee the insurgency from afar. Over the past year, the Taliban has threatened several provincial capitals by attacking army and police positions in outlying areas, attempting to cut off communications networks, and carrying out assassinations and bombings.

This year, the Taliban appears poised to carry out just such an attack: the militants, who have pushed into a number of districts surrounding urban areas, now threaten several provincial capitals, including Lashkar Gah, Pul-e Khumri, Qalat, and even the northern city of Kunduz, which fell to the Taliban in September 2015 before being retaken by Afghan government forces with U.S. support a few days later. (The provincial capitals of Farah, Maimanah, Asadabad, and Ghazni are also potential targets.) Based on Kabul's sluggish reaction to last year's Kunduz takeover, it is unclear how well Afghan leaders would respond to fresh Taliban offensives. Some Afghan army and police units are overextended, lack strong leaders, and have few so-called combat enablers, such as air support, that could support ground troops. Some of its units have also struggled to clear and hold territory, as the Afghan National Army's 215th Corps has in Helmand Province's eastern Sangin district.

Even after Mansour's death, the Taliban has shown little interest in negotiating for peace with Kabul. In fact, thanks to the National Unity Government's fragility and the drawdown of U.S. and other foreign forces, the Taliban is cautiously optimistic about its long-term military prospects. What is more, there are serious divisions within the movement over whether to engage in peace talks: whereas some Taliban members are tired of the fighting, others object to negotiating with a government they believe is corrupt, ineffective, and religiously illegitimate. Until Akhunzada and the Taliban's inner shura believe the war has reached a stalemate and is unwinnable, it is unlikely that they will be willing to conclude a settlement.

The Taliban is cautiously optimistic about its long-term military prospects.

More generally, peace settlements are tough to negotiate and tougher still to preserve. In 35 percent of the 143 insurgencies that ended between World War II and 2015, according to data compiled for my book Waging Insurgent Warfare, insurgent groups achieved victory by overthrowing a government or gaining independence; governments defeated insurgents on the battlefield another 36 percent of the time. Only 29 percent of these insurgencies ended in a draw or a settlement. In other words, roughly three quarters of the insurgencies fought in recent decades have ended with a battlefield victory by either government forces or their opponents. It might be ideal for the war in Afghanistan to end with a peace deal, but from a historical perspective, it is by no means a certainty.

Of course, the Taliban is no ten-foot tall giant. Unlike the Islamic State (also known as ISIS) was in 2014 in Iraq, the Taliban is probably not capable of conducting a successful blitzkrieg against a large swath of territory in Afghanistan, thanks, in part, to the roughly 10,000 U.S. soldiers and air power that remain in the country. What is more, despite Afghanistan's many military weaknesses, some of the country's forces have performed impressively against the militants so far; Kabul's high-end units, such as the Afghan National Army Commandos, can competently perform air assault and reconnaissance missions, among others.

Over the next few months, Washington's top priority in Afghanistan should be to work with the country's political elites to reach a consensus on the issues that are dividing them, especially electoral reform. The United States should help Kabul and UN officials as they attempt to issue new voter ID cards, train polling staff, and plan for future elections. It makes little sense to hold elections without electoral reform. Holding a contested vote or convening a poorly organized loya jirga would be more destabilizing than helpful and, by paralyzing the Afghan government, could give the Taliban a boost.

The United States should also maintain the forces it has stationed in Afghanistan through at least early 2017, leaving the decisions about U.S. force size, posture, and strategy to the next presidential administration. That would require Obama to refrain from cutting the United States' presence in the country from approximately 10,000 soldiers to 5,500, as he promised he would by the end of his presidency. But going back on that pledge would be worth it: reducing the U.S. presence to 5,500 troops would severely restrict Washington's ability to train and work with Afghan forces, increasing the likelihood of a Taliban advance. Afghan leaders actually want U.S. forces to stay. Even as the United States maintains its troop levels in the country, it should also continue to provide intelligence and close air support to Kabul. For similar reasons, the United States should encourage the other countries participating in NATO's Resolute Support Mission to maintain their current troop commitments.

There are no palatable alternatives to a U.S.- and NATO-led security presence in Afghanistan.

There are no palatable alternatives to a U.S.- and NATO-led security presence. A larger role for India would increase friction with Pakistan; a growing Pakistani role would worry Indian leaders and the large number of Afghans who distrust Islamabad; an increased Russian presence would open the old wounds of Moscow's invasion in the 1980s; and a ramped-up Iranian role could further destabilize Afghanistan by increasing the influence of Shiites in the predominantly Sunni country. In fact, a steep U.S. drawdown and the invigorated insurgency that would likely follow would encourage all these countries to jockey for position in Kabul, contributing to regional instability.

A sustained military presence would also help the United States counter al Qaeda and ISIS, both of which have established footholds in Afghanistan. Although persistent U.S. airstrikes have weakened al Qaeda's global leadership along the Afghanistan-Pakistan border, the organization's local branch, al Qaeda in the Indian Subcontinent, has probably recruited more Afghan and Pakistani fighters and found sanctuary in the eastern and southern parts of the country in the wake of the U.S. drawdown; its operatives are still present in Ghazni, Helmand, Kandahar, Konar, Logar, and Nangarhar provinces. As for the other terrorist groups in Afghanistan—ISIS' Khorasan Province, Tehreek-e-Taliban Pakistan, and Lashkar-e-Taiba—they, like al Qaeda, would benefit from the chaos that a growing civil war or Taliban-led insurgency would create.

Seth G. Jones is director of the International Security and Defense Policy Center at the nonprofit, nonpartisan RAND Corporation, as well as an adjunct professor at Johns Hopkins University's School of Advanced International Studies (SAIS). He is the author, most recently, of “Waging Insurgent Warfare” (Oxford University Press).

This commentary originally appeared on Foreign Affairs on June 16, 2016. Commentary gives RAND researchers a platform to convey insights based on their professional expertise and often on their peer-reviewed research and analysis.