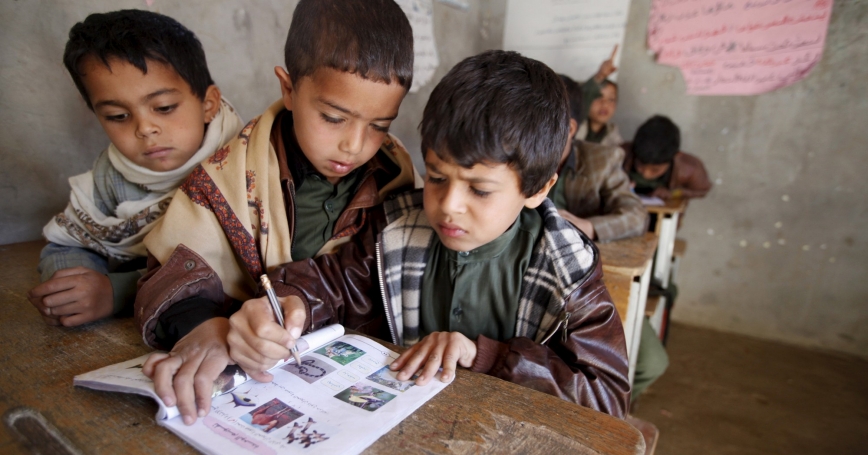 Boys study with a shared book at their school in a village outside Sanaa, Yemen, February 2, 2016

For decades, extremist ideologies have contributed to turmoil in countries across the Middle East. In recent years, global attention has turned to education as a way to counter extremism and improve the well-being of the region's people. This focus is rooted in studies that link illiteracy and poor education quality with youth susceptibility to extremism. What has been missing from these conversations is a focus on education and learning in children's first years, when much brain development occurs. Waiting to address education in later years might be too late.

Research shows that early education, both formal and informal, can enhance children's learning and help them develop critical thinking, an important skill in making good decisions later in life. The first three years of a child's life have been found to be a critical time to influence children's intellectual development and non-cognitive skills—such as perseverance, self-control and self-esteem. This is also the time to begin building the foundation for school success and adult achievement.

Government underinvestment in formal programs for young children is the norm throughout the Middle East and North Africa (MENA) region. According to the World Bank, “MENA's rate of pre-primary enrollment is lower than all other regions except Sub-Saharan Africa and is about one-third the rate of Europe, Central Asia, Latin America and the Caribbean”. Given these statistics it is reasonable to question whether students in the MENA region underperform compared to students in countries with comparable economic resources in part because of the relative lack of focus on the earliest years of children's lives.

The challenge inherent in improving early education in MENA goes beyond a lack of government support for formal programs. A RAND study found that while families in the region are engaged socially and emotionally with their young children, families are less engaged in promoting their cognitive development during this period. Social norms view early childhood as a period when little learning or cognitive growth occur. This leads parents to believe that they do not play a critical role in teaching cognitive and non-cognitive skills, and that acquisition of these skills can await the beginning of formal schooling. These beliefs accord with the views of many parents reported in a RAND study that only teachers have enough expertise to impart skills and knowledge.

To better enhance children's cognitive and non-cognitive development and promote their critical thinking and resilience, more attention should be devoted to the development of children in their earliest years. Both government and families have critical roles to play in improving children's and society's outcomes. Governments could develop plans to build and/or improve infrastructure for early education and invest in a range of interventions, like Early Childhood Care and Education (ECCE) centers. However, parents may resist sending their children outside the family to ECCE centers, so other support programs should also be made available. These may include home visiting, education programs that include both parents and children, and parent education campaigns designed to help families understand the enormous amount of brain development that goes on in the early years and to provide guidance on activities that promote their young children's cognitive and non-cognitive development....

Rita Karam is a policy researcher at the nonprofit, nonpartisan RAND Corporation and a professor at the Pardee RAND Graduate School. Gail Zellman is a senior behavioral and social scientist at RAND.

This commentary originally appeared on The National Interest on June 7, 2016. Commentary gives RAND researchers a platform to convey insights based on their professional expertise and often on their peer-reviewed research and analysis.