Good (Fast) Food as a Vehicle for Social Change 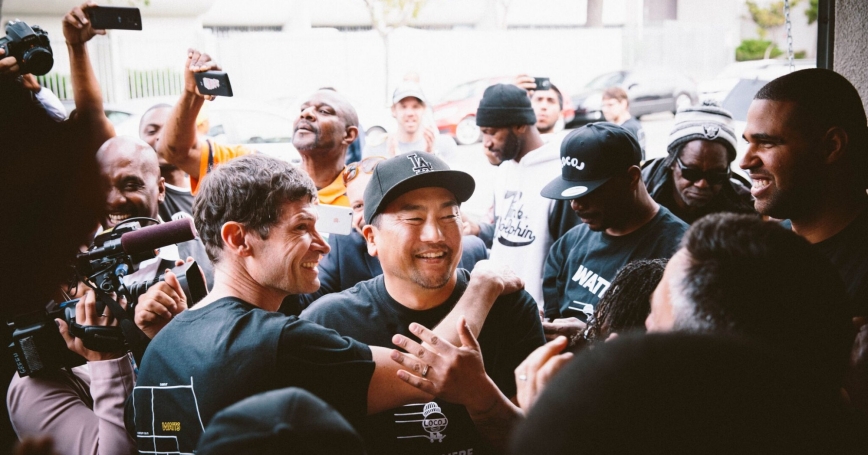 Chefs Daniel Patterson (left) and Roy Choi (center) celebrate during a ribbon-cutting ceremony at the restaurant Locol in the Watts neighborhood of Los Angeles, California

On a once-desolate corner of Los Angeles, something big is happening. At first glance, the story might seem to be about celebrity chefs and a reinvention of fast food, but it's so much more than that. With the opening of the first in a planned national chain of restaurants called Locol, two chefs are taking on persistent and major social issues—so-called “food deserts,” chronic unemployment, and the rebuilding of communities that have long been underserved and faced myriad challenges. Communities like Watts.

Chefs Roy Choi and Daniel Patterson opened Locol Watts this year—not incidentally—on Martin Luther King Jr. Day. The restaurant may resemble a humble, neighborhood fast-food place but that's just the physical manifestation of a much grander dream. The chefs talk about their latest venture as the start of a “revolution,” and so it may be. Part of their mission is to bring affordable and healthful food to forgotten areas that need it most, to urban food deserts where modestly priced, quality fresh food can be hard to find. “We believe that chefs should feed America, and not suits,” the company says on its website.

A few blocks away from Jordan Downs, a housing project with a long history of violence and crime, the restaurant owners are bringing change to the neighborhood one “burg” (hamburger) and “foldie” (taco) at a time, along with many other delicious and affordable foods. Choi and Patterson have big-league credentials; years apart both were named “best new chefs” by Food & Wine magazine. Three weeks into the new year, the magazine's restaurant editor was already calling Locol the best new restaurant of 2016. 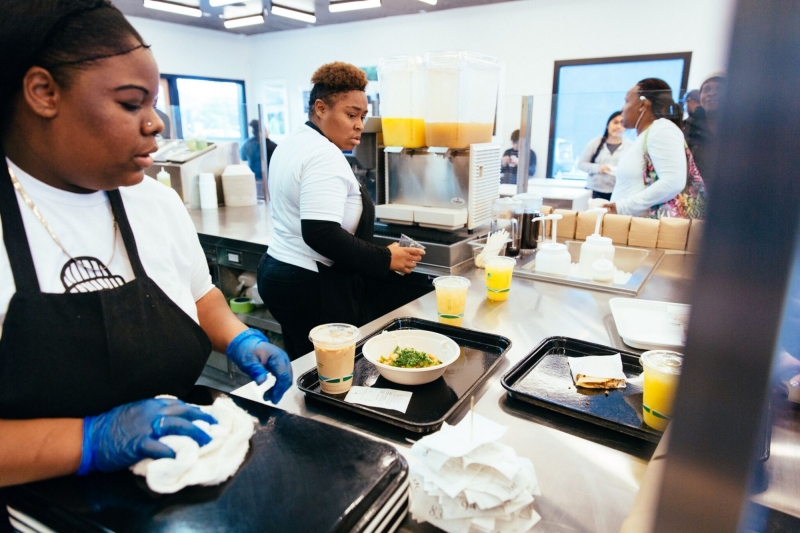 Staff work in the kitchen at the restaurant Locol in the Watts neighborhood of Los Angeles, California

In many ways, the really good food is just a vehicle for social change. Because Locol seems to be about working with communities to build them up. What's important here is that this is not a matter of charity or “helping the poor” (the median income in Watts is among Los Angeles County's lowest). The owners say that it is instead about recognizing the promise and potential of communities and the people who live there. To blur the boundaries between community and restaurant, the Locol building was designed with ample screens on the windows and doors.

Between 80 to 90 percent of the staff at Locol are from the neighborhood. Choi points out that the job application asked simply for a name, contact information and why the applicant wanted to work at Locol. There's no requirement for prior experience in a neighborhood where unemployment is high and the percentage of residents 18 or younger is among the highest in Los Angeles County. Nearly all of the cooks, cashiers and managers hail from the neighborhood. More than 40 people have been hired, most of them full time, and they are being paid well above minimum wage.

Two days before the restaurant opened, most of the cooks had only been cooking professionally for a week, and they were already displaying the talent to make it in the field, according to Patterson. As their skills expand, so will the restaurant chain and its employees' horizons—a second venue has opened in Oakland and a third is being planned for San Francisco. A member of the Locol Watts staff has been in Oakland training new employees, an example of the restaurant's commitment to providing workers with the opportunity for a true career path. This approach overturns the common wisdom and reality of restaurant employment, where workers tend to hopscotch from restaurant to restaurant in search of better wages and opportunities but usually never make it to the best-paying jobs, according to the 2013 book “Behind the Kitchen Door.”

Neighborhood by neighborhood, a few dozen jobs at a time, Choi and Patterson are tackling complex and persistent public policy problems and could very well succeed in their own way in communities where generations of government programs and charitable endeavors have had limited impact. They're doing it by recognizing the humanity of communities, the untapped talent within them, the promise of the market—and the not inconsequential power of really good food. If the restaurateurs can follow their plan for expansion, which targets underserved communities but is not limited to them, Locol could transform lives and communities even as it challenges our very notion of what fast food can be.

Susan L. Marquis is dean of the Frederick S. Pardee RAND Graduate School and vice president for Emerging Policy Research and Methods at the nonprofit, nonpartisan RAND Corporation. She teaches about food and labor policy.

A version of this commentary originally appeared on Shockingly Delicious on May 24, 2016.