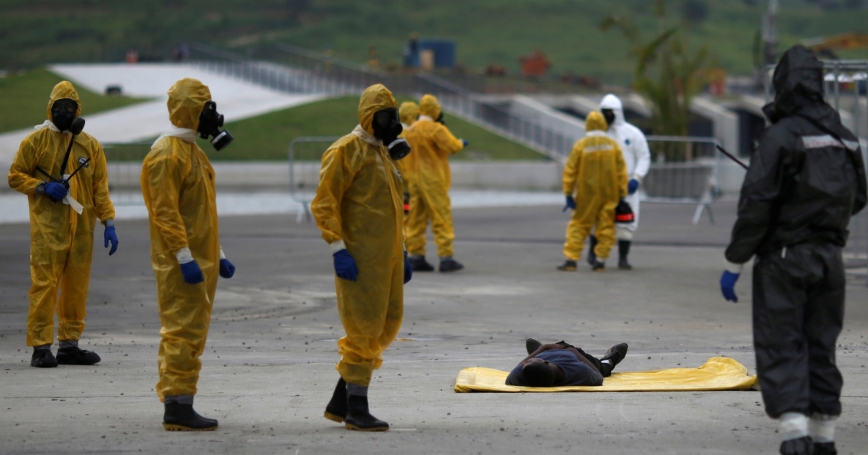 Brazilian Army soldiers take part in a simulation of decontamination of multiple victims during a training against chemical, biological, radiological, and nuclear attacks ahead of the 2016 Rio Olympics, March 11, 2016

In February, a radiological source went missing in Iraq. There was concern that ISIS might have gained control of the radioactive material and planned to create a Radiological Dispersal Device (RDD, commonly referred to as a “dirty bomb”) by using explosives to scatter the material over some target area. Fortunately, the radiological source was recovered, abandoned in Iraq, a few days later.

Thousands of radiological sources are used in the United States for various medical and industrial purposes. Many more are used overseas. In the past, a number of these sources have been misplaced, and in a small number of the foreign cases, this has led to serious contamination, including a few deaths. Efforts have been made to better control these radiological sources, but since at least 2001, there has been increased concern that terrorists might use them to create an RDD.

Calculations have shown that an attack would be unlikely to produce radioactive contamination sufficient to kill or even injure anyone. The only direct medical effect from such an attack would be an increased long-term cancer risk. The immediate impact, therefore, would be mainly psychological and economic. Governmental authorities would declare the more heavily contaminated areas off-limits. Some people might avoid any area where contamination was detected, no matter how slight. If an RDD were used in a major urban area, the economic losses could be in the billions or even tens of billions of dollars.

Given the widespread use of these sources both in the United States and overseas, it is unlikely that all of them can be protected sufficiently to prevent a terrorist from obtaining one. Fortunately most radiological sources are not very suitable for producing an RDD. Many have too little radioactivity to cause much contamination, and some are so radioactive that anyone who stole them would be dead before they could make an RDD. There have been proposals to phase out those radiological sources that represent the highest risk, but the users have resisted, and thus far the sources are still being manufactured.

Clear U.S. government radiation standards for dealing with an RDD attack might help reduce the psychological impact of an attack. However, the decision-making process has been ponderous. Fifteen years after the 9/11 attacks raised terrorism concerns, the Environmental Protection Agency has issued only “draft-interim” standards. Further, these are only “guidelines” and do not have the force of a regulation or law. And these guidelines might be overruled by the current conflicting regulations and laws, which were not written with an RDD attack in mind.

What is worse, these guidelines fail to take into account the adverse effects of evacuating people from the contaminated areas. Some Japanese studies have indicated that up to 1,600 (mostly elderly) people died as a result of the Fukushima evacuation. Any radiation standards, while minimizing radiation health effects, should also recognize that societal goals include minimizing economic and social disruptions.

The public needs to maintain perspective when it comes to radiation exposure. Though it is possible to detect very small amounts of radioactivity, it is not necessary (or possible) to avoid all radiation exposure. We live in a world full of radiation. Every day we are exposed to radiation that originates from outer space, the soil, and our own bodies. This background radiation is not uniform across the United States but is significantly higher in the mountainous west than in the coastal cities. Though an RDD may contaminate some areas with high levels of radioactivity, much larger areas will have relatively small increased radiation levels. Some may be tempted to flee any increased radiation level, but it makes little sense to abandon one's home to avoid a radiation dose smaller than one would receive simply by moving from New York to Denver.

Thus far, there has not been a terrorist attack using an RDD, but ISIS activity in Belgium suggests that terrorists have an interest in trying. It is important to phase out the most dangerous types of radiation sources. The United States should also update its laws and regulations to set clear and reasonable standards for dealing with an RDD attack. Otherwise, the current conflicting standards could create confusion and undermine public trust, resulting in far higher economic losses than necessary.

Gregory S. Jones is an adjunct senior defense policy analyst at the nonprofit, nonpartisan RAND Corporation and a member of the Pardee RAND Graduate School faculty.

This commentary originally appeared on The Cipher Brief on June 3, 2016. Commentary gives RAND researchers a platform to convey insights based on their professional expertise and often on their peer-reviewed research and analysis.