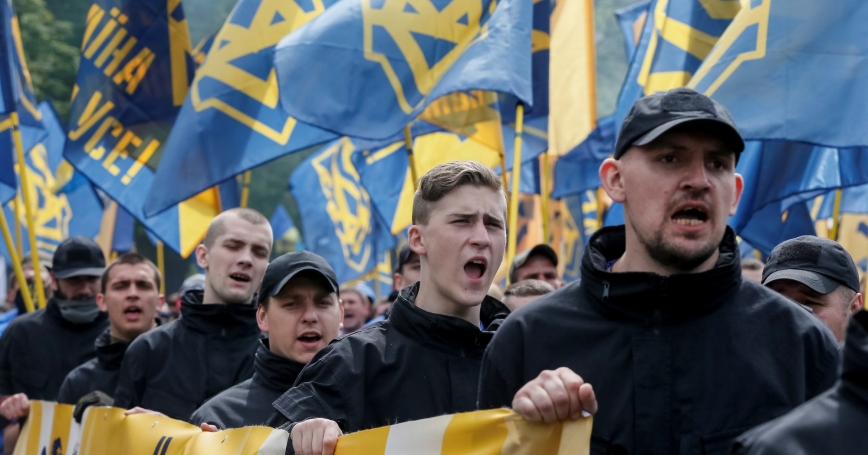 The Ukrainian national guard Azov regiment and activists of the Azov civil corp protest local elections in pro-Russian rebel-held areas of eastern Ukraine under the Minsk peace agreement, May 20, 2016

Moscow seeks a coercive sphere of influence over neighbors and great power status beyond, but these goals are incompatible. Only by pulling out of eastern Ukraine and reforming its economy can Russia gain broader acceptance and reach its potential as a great power. In a similar vein, last week at a rare meeting of President Vladimir Putin with his economic council, former Finance Minister Alexei Kudrin, Russian media reports say, urged an easing of geopolitical tensions to help the economy.

The Kremlin has faced a similar choice before. In the 1980s, the USSR was bogged down in Afghanistan and isolated. China, Iran and America, among others, boycotted the 1980 summer Olympics in Moscow. The Soviet economy, burdened by waste and low oil prices, was weakened. Technology lagged. In the late 1980s, the Kremlin finally sought relief. So that he could focus on fixing the Soviet system, President Mikhail Gorbachev eased foreign pressures by letting go of Warsaw Pact allies and concluding arms control accords with the West.

Moscow now faces less but still significant pressure. The Russian-backed armed rebellion in Donbas has led to Western sanctions never before imagined. Many sources of international financing to Russia's capital-starved economy are closed. The buying power of families, sapped by inflation and ruble depreciation, is falling. In addition to sanctions, low oil prices and structural inefficiencies are bleeding the economy. Drops in construction and investment darken the future. Creation of a 400,000-strong national guard, reporting directly to Putin, hints at concern about popular unrest.

The quickest way for Russia to relieve some of the accumulating strain is to withdraw its forces from Donbas and end support for its proxies, the so-called separatists. Ukraine would regain control of its border with Russia, with monitoring from the Organization for Security and Cooperation in Europe. An international effort to rebuild eastern Ukraine could follow, including contributions from Russia and the West. Although at present a Russian withdrawal seems improbable, it would end the most onerous Western sanctions and brighten economic prospects.

The February 2015 Minsk accords established a partial ceasefire in Donbas and provided terms to facilitate a political settlement. Fighting has declined from its peak, but Moscow still wages a low-level proxy war. Contrary to the accords, Russia refuses to allow OSCE monitors to control the border. Donbas lacks security for free and fair elections, and Ukraine's government may be too weak to conduct them.

Economic reform can also ease pressure. As in the 1980s, declining living standards are dispiriting. Disgruntlement over delayed and eroding pay is rising. Yet reforms to boost productivity and create new sources of economic growth are opposed by entrenched and state-connected interests, and by many Russians. If Moscow delays reform, it will lose international heft. Russia is barely an economic great power; last year its GDP was 10th in size among G-20 countries.

Despite its challenges, Russia plays some great power roles. True, as President Barack Obama has pointed out, Russia does not "set the agenda around any of the issues that are important" in G-20 meetings. Nonetheless, Moscow's cooperation in the P5+1 format — the five permanent members of the U.N. Security Council and Germany — helped achieve the historic nuclear deal with Iran. Russia and America teamed up to destroy Syrian chemical weapons. Russia may have another great power opportunity if it helps to resolve the Syria crisis.

As long as it occupies Donbas, however, Russia can hope only for limited gains. Again the 1980s are illustrative. Even as the USSR and the West agreed in Geneva to slash nuclear weaponry, Washington was arming mujahedeen fighters in Afghanistan. Moscow lacked wide international support until it withdrew from there, began moving troops out of Eastern Europe and ended communist rule at home.

A great power has a portfolio of interests and sometimes has to abandon an unproductive venture. It was painful for the USSR to cede Afghanistan in 1989, as it was for America to leave Vietnam in 1975 and Iraq in 2011. These decade-long investments yielded poor returns and lost popular support.

Another risk for Russia is that if it delays in exiting Donbas, Western attitudes may harden. This might already be happening. In February, Washington warned U.S. investment banks not to help underwrite Moscow's first international sovereign bond offering since the seizure of Crimea. Days later Brussels cautioned European investment banks. Moscow abandoned its plan. The West was worried that Moscow would divert some bond sale proceeds to sanctioned entities. Most Western banks in Russia are reducing operations or leaving. Large Chinese and other international banks are also wary. They fear compromising their larger interests in the West, or infringing sanctions or anti-money-laundering laws.

Mounting frustration is also reflected in a new bill before the U.S. Congress. It would deny the president the authority to lift Donbas-related sanctions unless the president "certified" that Ukraine had regained control over Crimea, an unlikely prospect.

If Russia does decide to cut its losses and pull out of Donbas, arrangements may not be hard to find on such issues as refugees, amnesty for most fighters and aid. Some in Donbas might want to settle scores, but ethnic Ukrainians and Russians there have long lived together. International peacekeepers, police and monitors could contain risks.

If Russian aggression in Donbas persists, however, working together constructively will be more difficult. And the West will neither accept Moscow's annexation of Crimea nor overlook persecution of its Tatar minority.

William Courtney is an adjunct senior fellow at the RAND Corporation and was U.S. ambassador to Kazakhstan and Georgia. Donald Jensen is a senior fellow at the Center for Transatlantic Relations in the School of Advanced International Studies at The Johns Hopkins University.

This commentary originally appeared on U.S. News & World Report on June 1, 2016. Commentary gives RAND researchers a platform to convey insights based on their professional expertise and often on their peer-reviewed research and analysis.