A Spotlight on the Supreme Court, and Its Vacancy 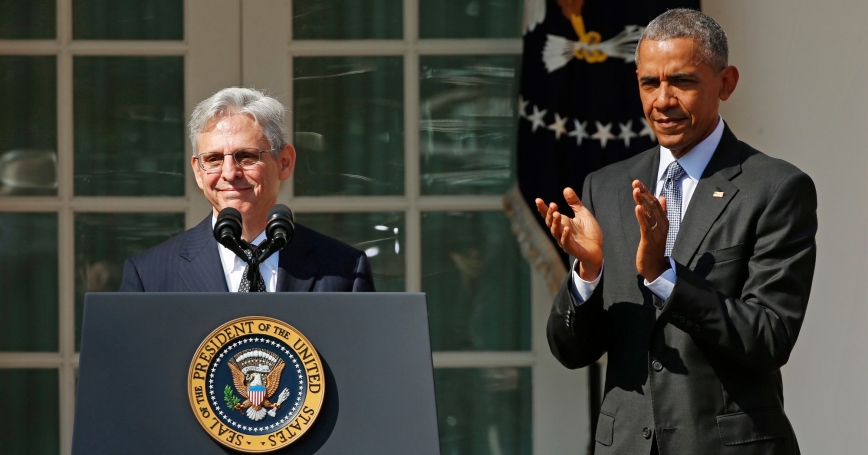 Judge Merrick Garland speaks after President Obama announced him as his nominee to the U.S. Supreme Court, March 16, 2016

More than 17 weeks have passed since President Obama nominated Merrick Garland to the Supreme Court. To be appointed, the Senate must confirm Garland's nomination, a process designed by the Constitution but managed by the Senate's internal rules about when or whether to entertain the nomination. Action by the Senate majority leadership is required before Garland can get an up-or-down vote.

The delay in the Senate has everything to do with politics, of course. The death in February of Supreme Court Justice Antonin Scalia created a rare even equilibrium on the high court. Four Democrats and four Republicans sit on the bench. More importantly, there are four conservatives and four liberals, a distinction of some gravity because history and scholarship show ideology matters more than party affiliation in court voting behavior (lessons learned by Presidents George H.W. Bush and Dwight Eisenhower in the appointments of the unexpectedly liberal Republicans David Souter and Earl Warren).

With the exception of those captivating days when the justices hand down landmark decisions, as they did in late June before their summer recess, the court generally sits in shaded background—a branch of government just on the periphery, content to be out of the political limelight. However, vacancies on the Supreme Court, and the intensity of Senate politicking over the nomination, bring the court to center stage even when the justices are not ruling on abortion or Affirmative Action.

Like many lawyers, I follow the court more closely than most people. And as a political scientist, I have seen recent evidence that the Supreme Court no longer has the confidence of many Americans. In April and May, RAND surveyed more than 1,200 respondents through its American Life Panel, a nationally representative group of adults that is regularly surveyed online. Asked whether they approved or disapproved of the way the Supreme Court handles its job, almost 48 percent disapproved. More tellingly, less than 42 percent approve. Those numbers place the court well ahead of Congress (with a job approval rating of 16 percent according to a June Gallup poll), but behind President Obama (who has a 52 percent approval rating).

To interpret those numbers differently, that means two out of the three branches of American government fail to win the approval of a majority of Americans. That the Supreme Court is one of those two is startling. Designed by the framers of the Constitution as a bastion of reasoned judgment that was independent of the political thrall, the court historically has enjoyed solid public support. Yet now the justices' chambers risk being seen as just another battlefield in a national ideological struggle.

In addition to declining public approval of the sitting bench, there has also been evidence that Americans are more interested in the personal politics of potential Supreme Court justices. Certainly, Senate confirmation hearings over recent decades have shown nominees questioned at length about manifold topics, including their personal lives, temperament and ideological leanings. My research suggests that a large segment of the public endorses this deeper inquiry into the nominees' attitudes. Asked whether the Senate should consider only a nominee's background and qualifications, or also include a nominee's political views, 50 percent said only background and qualifications, while 43 percent want to know what a judicial nominee's personal politics are.

The Constitution, on the other hand, makes no such inquiry into the hearts of the nominees. Article Three is utterly silent on the qualifications and requirements of the federal judicial officers. But as Hamilton (the Founding Father, not the Tony winner) wrote in the Federalist No. 78, perhaps the key prerequisite for judges is having “an uncommon portion of fortitude” so as to carry out “their duty as faithful guardians of the Constitution, where legislative invasions of it had been instigated by the major voice of the community.”

The Supreme Court stands as a beacon of American ideals. It represents the country's hope that there can be “Equal Justice Under Law,” as is inscribed on the court's main entrance. Although the court fails to win over a majority in terms of job approval, 58 percent of those surveyed said they think the Supreme Court has just the right amount of power in the nation's tripartite government. And a majority still thinks that the court decides its issues on a case-by-case basis, rather than through the lens of ideology. True or not, that hope for equal justice is strong, even if the public views how the court handles its job with some suspicion.

But what about that vacancy? Before Garland was nominated, a majority of respondents (56 percent) said the seat should be filled before the next president takes office in January. That puts them at odds with the Senate, where there are no signs of movement. In a time of fiercely divided politics about nearly all aspects of American life, a clear majority wants a full bench, but appears unlikely to get it soon.

Geoffrey McGovern is a political and social scientist at the nonprofit, nonpartisan RAND Corporation.

This commentary originally appeared on The Hill on July 19, 2016. Commentary gives RAND researchers a platform to convey insights based on their professional expertise and often on their peer-reviewed research and analysis.