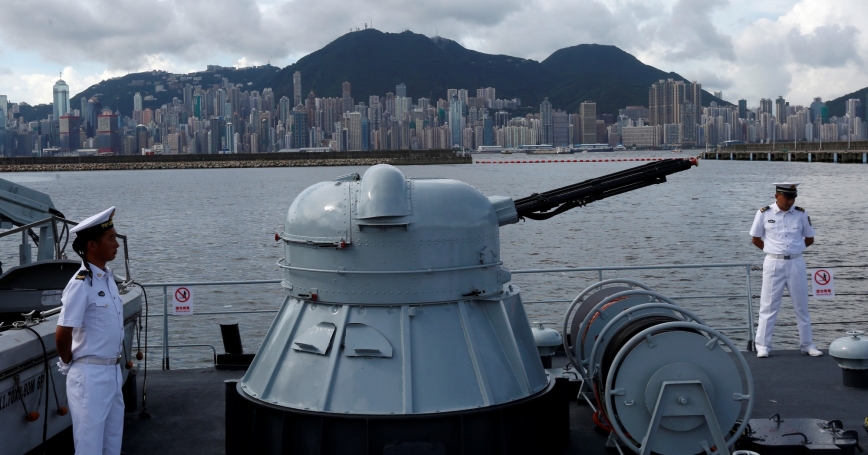 People's Liberation Army naval soldiers stand on a military vessel at a naval base in Hong Kong, July 1, 2016

China's military has undeniably made tremendous strides in recent years. The People's Liberation Army (PLA) Navy launched its first aircraft carrier and in 2016 announced construction on a second carrier. In 2015, the PLA Navy began nuclear deterrent submarine patrols. Impressive advancements in military technology (PDF) may be seen in the country's lethal array of ballistic and cruise missiles, its J-20 and J-35 stealth aircraft, and other weapons and platforms.

While analysts have thoroughly scrutinized developments in weapons, platforms, organization, and training, the changes to the political and intellectual aspects of the PLA, such as party-military relations or defense strategy, have earned comparatively less scholarly attention. You Ji's book aims to address that gap in two ways. The first half of the book tackles the formidable challenge of explaining the curious nature of civil-military relations in China. You highlights important developments in the relationship, although his attempts to present a theoretical framework is severely hampered by the decision to resuscitate ideas from a classic, yet dated, mid-century work. The second half of the book surveys developments in the defense strategy and related concepts of the PLA. Besides providing a fine summary of major developments, You's analysis draws attention to key concepts that have been largely overlooked by the PLA-watching community. Students of the PLA will find this book a thought-provoking and useful companion to the growing literature on the Chinese military.

The peculiar evolution of the PLA as an increasingly professionalized military that nonetheless remains the armed wing of an ostensibly communist-led military has baffled observers for years. Assuming that a Marxist party committed to socialist revolution could not possibly tolerate the limited autonomy required of a professionalizing military, analysts have struggled to explain the apparent anomaly of the post-Mao Zedong PLA. A 2010 study by Michael Kiselycznyk and Philip Saunders lamented a “lack of effort to develop, employ, or test new theoretical models that could help produce a new unified theory of Chinese civil-military relations.”[1]

You gamely takes up the challenge. He offers numerous trenchant observations on the state of party-military relations. For example, You locates the source of stability in the party-military relationship in the party's adoption of a national-oriented, as opposed to class-based, governing agenda that has largely converged with the agenda of a PLA oriented toward the defense of the nation's interests. Paradoxically, You simultaneously observes a “hollowing out” of party control of the military, owing to a decline in the military experience and expertise of central leaders and to the increasing autonomy of a professionalizing PLA (p. 9). He also offers fascinating anecdotes regarding the relationship between the Central Military Commission chair and the military's leaders, though it is difficult to assess the veracity of some of the claims. You claims, for example, that President Hu Jintao only made his move to take down Bo Xilai in 2012 after he received pledges of support from Guo Boxiong and Xu Caihou. He also tells an interesting story in which President Jiang Zemin, watching a disaster relief operation from an airplane flying overhead, asked a PLA general which units were involved. You explains that this episode revealed the limits of Jiang's understanding of the military, since he signed the orders committing the units to the operation.

Efforts to present a theoretical framework for the party-military relationship prove more problematic, however. Much of the difficulty stems from You's effort to revive concepts from Samuel P. Huntington's The Soldier and the State: The Theory and Politics of Civil-Military Relations (1957). A classic in the study of civil-military relations, the book's typology on variations of civilian control of the military have proven increasingly dated since its publication. To understand why, it is worth recalling that Huntington wrote his book in an era in which ideologically charged militaries had just fought, or threatened to fight, devastating wars. The paradox of powerful militaries under the command of illiberal fascist and communist regimes led Huntington to propose the idea that governments infused with extreme ideologies controlled their militaries differently than did the governments of liberal democracies. Huntington argued that fascist and communist regimes controlled their militaries by constantly infusing them with the values, ideology, and organizations of their political masters, a process he called “subjective control.” Communist-led militaries, for example, abolished ranks and hierarchies in solidarity with their civilian leaders who advocated radical egalitarianism. Liberal democracies, by contrast, relied on a method of “objective control” that encouraged their militaries to develop a semi-autonomous sphere of professional excellence. The control essentially consisted of recognition of the relative responsibilities of civilian leaders, who made policy decisions regarding the use of military power, and military leaders, who managed the use of military force in accordance with the will of the civilian leaders.

Applied to China, Huntington's framework may have explained party-military relations in the subjectively controlled revolutionary peasant armies of Maoist China, but it has proven unsatisfactory as a guide to the analysis of the PLA in the post-Mao era. The difficulty owes to the fact that the Chinese Communist Party (CCP) has refused to behave like a classic communist regime. The CCP's turn away from revolutionary politics, initiated under Deng Xiaoping, culminated in the party's adoption of a new paradigm as a governing party at the 16th Party Congress in 2002. Over time, the party's leadership has developed a governing agenda centered on elevating the standard of living of the people and realizing the country's greatness. To achieve this policy program, government officials have esteemed the specialization of knowledge and development of professional expertise, even as they continue to operate within the structures of a legacy Leninist political system.

The CCP's specialization of government functions to realize pragmatic objectives poses serious challenges for a Huntington-era framework premised on a clear distinction between countries that esteemed specialized civilian and military functions and those that did not. According to You, the “new foundation” for civil military interaction is one in which civilians “accord generals due administrative and operational autonomy in managing their business of war in exchange for their non-intervention in civilian affairs, including internal CCP politics, generic policy processes, and top leader selection” (p. 4). This sounds a lot like what Huntington meant by “objective control,” and You clearly is aware of the similarity. Yet his efforts to explain how the PLA remains under “subjective” control merely illustrate the difficulty of trying to operate in Huntington's terms. You claims CCP leaders have “tried to reconcile two contradictory demands” for the military: first, they must be “political enough” to support the central leadership but “not overtly political,” that is, they should not intervene in domestic politics. Simultaneously, central leaders also encourage military professionalism as an “effective tool to divert generals away from unwanted political pursuits.” You invokes the term “conditional” to describe a subtle balance between these competing imperatives (p. 8). Unfortunately, You includes so many qualifiers under that label that it becomes difficult to distinguish between the two ostensible types of controls. Underscoring this point, he acknowledges that his framework could equally be described as “conditional objective control” (p. 39). When a situation can be described as a variant of either of two competing categories, the utility of such a theoretical framework may be justly questioned. You's gallant effort to salvage Huntington's theory merely confirms its irretrievable obsolescence for the purposes of studying the contemporary Chinese military.

The second half of the book provides a survey of key intellectual developments in the military since the Deng era, with most of the focus on the Xi Jinping era. The book delves into Chinese-language sources to trace the evolution of the country's contemporary defense strategy and the implications for force development and operations. You provides a cogent analysis of the country's defense strategy. He characterizes China's current defense concept as a “frontier defense,” which he contrasts with an orientation toward “homeland defense” that characterized most of the reform era (p. 136). This is an important insight that helps illuminate many of the changes underpinning the PLA's modernization, training, and operations. He explains, for example, that the “frontier defense” idea is premised on an extension of the depth of defense further from the homeland. It also imposes requirements to protect “open ended and expanding national security and economic security interests that require PLA protection with growing power projection capabilities” (p. 137). Understanding the defense requirements provides crucial context for understanding the PLA's reorganization into a joint command, and its pursuit of a smaller, more lethal military that elevates in importance the role of the air, naval, and missile services.

You also explores the implications of the shifting security requirements on the thinking of military strategists. Particularly interesting is his analysis of how naval strategists regard implications for operations in the maritime domain. He draws attention, for example, to the concept of the “intermediate seas” (zhonjian haiyang). Describing the term as an “evolving concept,” You defines this region as the “outer edges of the first island chain” that includes the “critical waterways around Malacca Strait” (p. 184). He explains that strategists regard this region as “crucial for China's Indo-Pacific” ambitions (p. 188). This observation fills an important gap in the understanding of students of the PLA who have already recognized the importance of the “near seas” (jinhai) and “distant seas” (yuanhai) for PLA modernization and operations.

You's book provides a collection of interesting and often perceptive observations on political and intellectual aspects of a rapidly modernizing PLA. Some of the more provocative statements may merit a skeptical eye. You states, for example, that the “debate” over operational control of space forces was “settled in May 2014 when Xi personally ordered the PLA Air Force to unify the operational command of China's combat space units” (p. 175). The claim is surprising, in light of the PLA's subsequent establishment of the Strategic Support Force responsible for space operations in early 2016. Overall, however, the analysis is informed by careful scrutiny of a rich array of Chinese-language material. Covering topics ranging from the relationship between top civilian and military leaders and the frequently overlooked People's Armed Police, to defense strategy, the book provides a useful complement to books focused more on the organization, training, and hardware of the PLA.[2]

This commentary originally appeared on H-Net on July 5, 2016. Commentary gives RAND researchers a platform to convey insights based on their professional expertise and often on their peer-reviewed research and analysis.