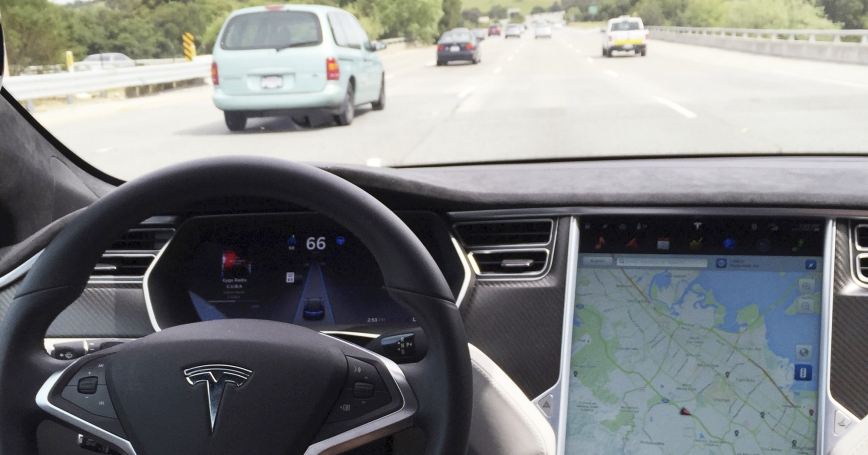 The interior of a Tesla Model S is shown in autopilot mode in San Francisco, California, April 7, 2016

It has happened. The first known fatality in an autonomous vehicle occurred on May 7 in Florida, when a man driving a Tesla Model S with Autopilot collided with a crossing tractor-trailer as it made a left turn across his lane. Neither the Autopilot system nor the driver reacted in time to avoid the fatal crash.

This incident raises important questions. First, does it mean that autonomous vehicles are less safe than human drivers? No. Tesla reports that this fatality occurred after 130 million miles of Autopilot driving. Human drivers experience about one fatality in 100 million miles.

This would seem to imply that Tesla's systems are safer, but the Autopilot miles are simply too few to make statistically meaningful comparisons. These statistics do not tell us whether Tesla's Autopilot systems are more or less safe than human drivers; they only tells us that they are not perfect.

Second, will it or should it stop development of self-driving and driverless cars? No. There are nearly 90 traffic fatalities each day in the United States and many more worldwide. Research by the National Highway Transportation Safety Administration shows that about 94 percent of these are caused by human errors that autonomous systems could reduce or eliminate. So far, the public and the media responses have been responsibly tempered: Don't throw the baby out with the bathwater.

Third, what can be learned from this? Hopefully a great deal.

This fatality occurred in a fairly common traffic situation: one vehicle turning across another vehicle's path. Some reports suggest the Tesla driver may have been distracted and speeding, and the truck may have turned dangerously. The ongoing government investigation may find that the human-created conditions that led to the imminent crash were unavoidable — that the Tesla Autopilot simply could not have stopped in time. Such an outcome would suggest that human drivers can create crash antecedents that automated systems cannot overcome, no matter how sophisticated they are.

Alternatively, the investigation may find that there was opportunity to detect and avoid the crash (for instance, by using other types of sensors), but the Tesla's hardware or software was not equipped to do so. If this occurred, the question arises: Should automated systems be allowed that are not as sophisticated as they could be, because they depend on a distractible human driver to fill in the gap?

Research suggests that while partially automated systems may address some forms of human error, they may actually create unique safety risks (PDF). That's because drivers may believe that, since the car is at least partially capable of driving itself, they don't need to pay full attention to the road.

Perhaps more than anything, this is an occasion to better understand the risks of autonomous vehicle technologies. The investigation into the Autopilot crash should identify the human and technology factors that led to this fatality. If those factors are part of a growing pattern, it should identify changes to the technology or its deployment that could reduce those risks.

For example, systems like Tesla's that require human intervention may need to actively assess whether the driver is indeed paying attention. Simultaneously, drivers should keep their eyes on the road, literally. Drivers should take heed when their car asks them to pay attention. Above all, the investigation and its findings should contribute to a reasoned public assessment of an uncertain but promising technology.

Nidhi Kalra is a senior information scientist at the nonprofit, nonpartisan RAND Corporation, a co-director of RAND's Center for Decision Making under Uncertainty, and a professor at the Pardee RAND Graduate School.

This commentary originally appeared on USA Today on July 15, 2016. Commentary gives RAND researchers a platform to convey insights based on their professional expertise and often on their peer-reviewed research and analysis.