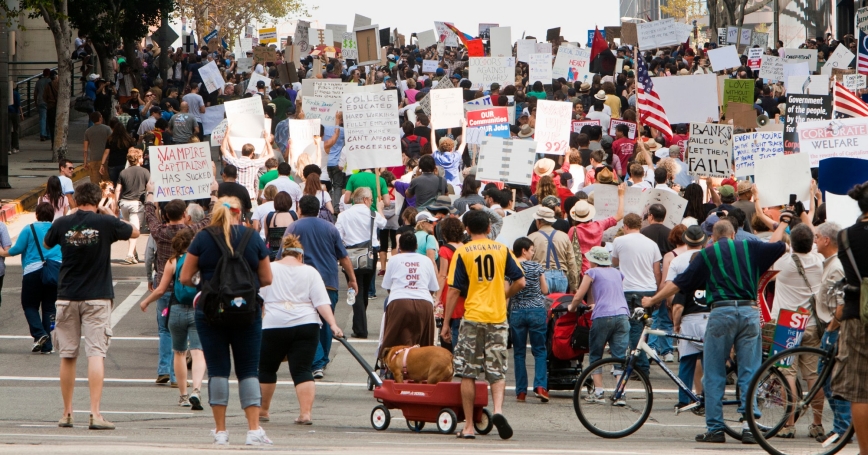 Demonstrators march in the Occupy LA protest through downtown Los Angeles to City Hall on October 15, 2011

In the wake of the 2008 financial crisis and the tepid recovery that has followed, concern about economic inequality has moved into the mainstream of political discussion. Recent research has also fueled concerns about how high and rising income inequality drives an inequality of opportunity for subsequent generations.

In what has been dubbed the “Great Gatsby Curve” (or the “Line to Serfdom”), economist Miles Corak (PDF) found that countries with higher income inequality at a given point in time tend to have lower economic mobility between generations. In a separate set of studies, a team of economists from Harvard and the University of California at Berkeley found that, in the United States, metropolitan areas with smaller middle classes and higher income segregation were associated with lower economic mobility between generations. For families at the bottom of the economic ladder, this immobility could put the American Dream out of reach permanently.

As most people would readily acknowledge, income and wealth inequality can be directly propagated across generations through inheritance, or the lack thereof. Furthermore, the policies used to address this direct channel, such as inheritance taxes, are fairly obvious and generally well understood.

However, in a recent study, we looked into how economic inequality can also be indirectly propagated through investments in human capital (the term economists use to describe a person's accumulated knowledge and skills). For example, affluent parents can pay to send their children to high-quality schools, an option not often available to low-income parents. This disparity has the potential to become a vicious cycle of low income leading to fewer opportunities and vice versa across generations.

Essentially, policies that narrow the gap in investments in children also reduce the gaps in outcomes between affluent and poor children. Improvements to education, such as additional spending on low-income students, particularly in early childhood, have been shown to result in improved outcomes later in life. Likewise, efforts that improve the health care of low-income children allow them to achieve more in school and thus earn more as adults.

More specifically, policies designed to reduce poverty, such as the Earned Income Tax Credit or food stamps, can play a role in improving parental financial stability and therefore the stability of children's upbringing which is beneficial for child development. Additionally, novel ideas, like vouchers for families to move from low-income areas to higher-income areas, could reduce segregation by race and income and have been shown to improve children's earning potential as adults.

As new studies warn of high and rising inequality, it is important to remember that commonsense approaches — from improvements in education and access to quality health care to reductions in poverty and increased integration — have been shown to provide young people with better opportunities. Policymakers of all stripes should keep these concepts in mind when stumping about America's economic problems and designing policies to solve them.

This commentary originally appeared on Spotlight on Poverty and Opportunity on July 6, 2016. Commentary gives RAND researchers a platform to convey insights based on their professional expertise and often on their peer-reviewed research and analysis.