Judgment on the South China Sea: What's Next? 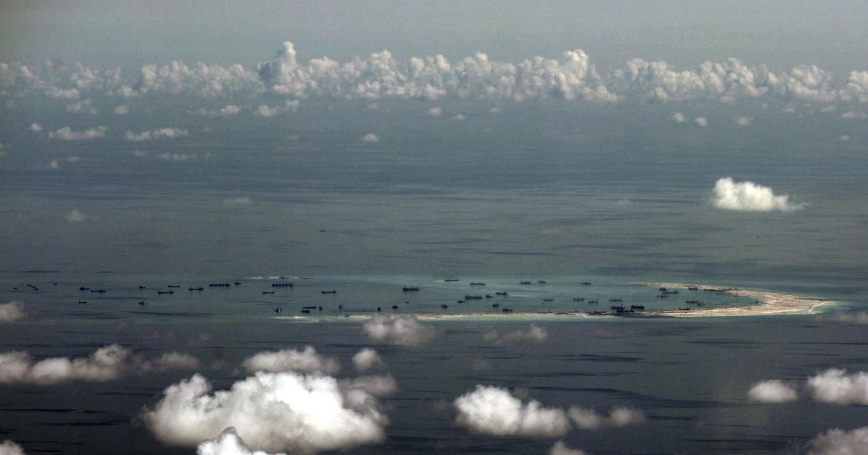 A photo taken from a Philippine military plane shows the alleged ongoing land reclamation by China on Mischief Reef in the Spratly Islands in the South China Sea, May 11, 2015

On July 12, the Tribunal of the Permanent Court of Arbitration at the International Court of Justice issued a long-awaited ruling on a 2013 claim by the Philippines to maritime entitlements in the South China Sea, siding with the Philippines — and against China.

How China reacts could have far-reaching consequences for China, the Philippines, the United States and other nations that depend on a peaceful and integrated Southeast Asia. While China has rejected the court's judgment, the ruling could still lead to a negotiated agreement between China and the Philippines.

The Philippines sought judgment on three main issues: That Chinese claims in the South China Sea must comport with the United Nations Convention on the Law of the Sea (UNCLOS), rather than historical claims; that maritime features occupied by China in the South China Sea are rocks, low-tide elevations or submerged banks, but not islands; and that the Philippines' right to operate inside of its exclusive economic zone and continental shelf as outlined by UNCLOS should be protected from Chinese harassment.

On the first issue, the Permanent Court of Arbitration noted that, while Chinese navigators and fishermen and those of other states historically made use of the land features of the South China Sea, there was no evidence of China's exercise of exclusive control over the waters or their resources. Further, signatories to UNCLOS, such as China, were bound by its strictures rather than historical claims. Hence the tribunal ruled that there was no legal basis for China to claim rights to maritime resources within the sea areas falling within the nine-dash line.

On the second issue, the Permanent Court of Arbitration ruled that, based on historical evidence, none of the land features in the Spratly Islands were capable of sustaining human habitation or economic life of their own, and hence were not capable of generating an exclusive economic zone. In particular, regarding Mischief Reef, which is part of the Philippines' continental shelf and which has been the site of Chinese reclamation activity, the judgment noted that China's installations and the creation of artificial islands without the authorization of the Philippines violated Philippine sovereignty.

In summary, the tribunal supported the claims of the Philippines. China has rejected the judgment, as it said in advance it would. Its official reaction has been that the tribunal's award is “null and void and has no binding force.” Given that the ruling will not be enforced by the Chinese, what are the chances for a negotiated settlement?

The economic losses China could sustain, primarily through the loss of mineral exploitation rights, are not expected to be significant. China's ability to use the South China Sea for its trade is not likely to be affected by the judgment. Hence, China's economic growth will not likely be harmed by this judgment.

However, while the economic issues are manageable, China's image as a responsible global power may be harder to sustain. The judgment puts China in the difficult position of balancing the reality of an adverse judgment accepted by almost every nation with managing the sentiment of its population, which is outraged by the judgment.

While the influence of Chinese nationalism on this issue is hard to predict, the initial signs are encouraging. Foreign Minister Wang Yi noted that “the Chinese people will not accept the result.” However, he added that “now that the farce is over, it is time to get back to the right track,” apparently signaling that Beijing is willing to enter into negotiations with the Philippines. The Philippines' response has been helpfully low-key. It has issued a call for China to exercise “restraint and sobriety.” The United States has sought to be helpful by urging “all claimants to avoid provocative statements or actions” and to make “efforts to address maritime disputes peacefully.”

This is certainly a better start than some had predicted, including those who foresaw the imposition of stiff economic sanctions by China on the Philippines, which could have led the United States to intervene. Still, the best hope for a negotiated outcome, beyond the immediate calming of the waters, is the realization by all sides that a peaceful, prosperous and collaborative region of nations that surround the South China Sea region is vital to China's long-term economic and security interests.

Rafiq Dossani is director of the Center for Asia Pacific Policy at the nonpartisan, nonprofit RAND Corporation.

This commentary originally appeared on U.S. News & World Report on July 18, 2016. Commentary gives RAND researchers a platform to convey insights based on their professional expertise and often on their peer-reviewed research and analysis.