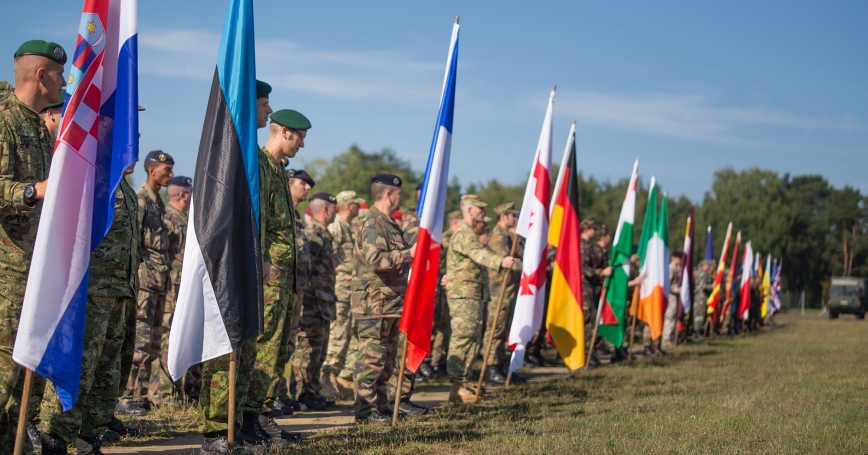 Partner nations parading their colors at the opening ceremony of Combined Endeavor 2014 in Grafenwohr, Germany

At the Warsaw 2016 NATO Summit on 8th and 9th July, NATO agreed to establish a permanent rotating presence of its troops in the three Baltic countries. The move is seen as an important gesture, as it highlights NATO's readiness to defend its Eastern member states against any Russian aggression. The Warsaw decision may be interpreted as NATO's acknowledgement of its Baltic members and a commitment to take their concerns seriously.

Last year's request of the Baltic states for a permanent rotational NATO force in Estonia, Latvia and Lithuania would comprise a diplomatically significant yet militarily negligible positioning of troops in an attempt to involve all allies in times of crisis. Indeed, with the increased security concerns in its eastern flank, NATO has found itself returning to the “tripwire deterrence” of the 1950s, whereby relatively small forces are planted in strategic locations to activate retaliation in the event of an attack.

The decision to station more allied troops in the Baltic states has not come easily and taken several years to come to fruition. NATO has been careful in changing its previous policy of reassurance to the Baltic states to this latest policy of deterrence. The Baltic states, which have participated in NATO security missions outside their borders, now find themselves needing enhanced security assistance at home during a time of constrained spending on defence and differing threat perceptions among the members of the alliance especially with regard to Russia.

Increasing security along NATO's eastern flank began following the Wales NATO Summit in 2014. This led to the hosting of the NATO Air Policing mission out of the Estonian Amari air base (in addition to the already existing Baltic Air Policing base in Siauliai, Lithuania), the establishment of NATO force integration units and the enhancement of the NATO Response Force through the creation of the Very High Readiness Task Force and a strategy on dealing with hybrid threats.

In May 2015 the Chiefs of Armed Forces of the Baltic states called for a permanent presence of NATO troops in their territories, which is what led to the latest commitment from NATO. This was a reaction to the increased Russian air and naval activity in the region, the establishment of military infrastructure near their borders and Russian aggression in Ukraine.

A recent RAND report on reinforcing deterrence on NATO's Eastern Flank concluded that “about seven brigades, including three heavy armoured brigades — adequately supported by airpower, land-based fires, and other enablers on the ground” would be needed in the event of actual Russian aggression against the Baltic states. Even with the renewed NATO commitment, Estonia, Latvia and Lithuania are still far from this target and might require further support from their allies.

It is worth noting that progress in defence has been made by all three Baltic states, notably the commitment to increase their defence budgets to two per cent of GDP. Estonia already reached this goal in 2014, while Latvia and Lithuania are planning to reach it in 2018 and 2020, respectively. The Baltic states are also boosting their air surveillance, land forces and national guards with more efficient infrastructures and procurement of infantry fighting vehicles, anti-tank systems and air-defence systems. However, host nation support (HNS) infrastructure is a key investment that is required to make the most of allied support. Due to limitations in their current HNS infrastructures, the Baltic states are only able to host three battalions from NATO.

Despite some perceived limitations, NATO's commitment seems to tick two vital boxes. It is a symbolic indication of potential reaction and sacrifice on behalf of the allies in case of Russian aggression against the Baltics states, while the multinationalism of the battalions indicate support from a number of NATO member states in the defence of the region, as well as the commitment to Article 5 in the event of a crisis.

The decision, however, is not a significant military challenge for Russia. Indeed, it appears that a greater commitment of NATO forces to the Baltic states and further development of the defence capabilities of the Baltic states might be required in the future. At the moment, the decision resembles a trooping of NATO's colours in Eastern Europe and it remains to be seen whether the decision is a significant act of deterrence.

Marta Kepe is an analyst at RAND Europe in the defence, security, and infrastructure team. She previously worked for the Latvian Ministry of Defence, where she worked on armaments issues within the European Defence Agency and NATO. She writes here in a personal capacity.

This commentary originally appeared on European Geostrategy on July 27, 2016. Commentary gives RAND researchers a platform to convey insights based on their professional expertise and often on their peer-reviewed research and analysis.