Obama Must Take a Strong Lead at the NATO Summit 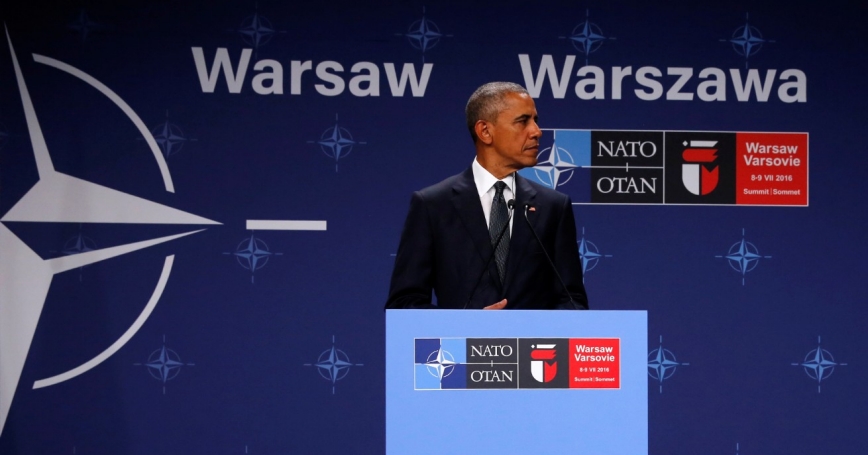 When President Obama travels to Warsaw, Poland, for the NATO Summit July 8-9, strong U.S. leadership will be crucial to setting NATO on the right path, especially after Brexit.

The Warsaw Summit is shaping up to be even more critical for Europe than it seemed a few months ago. Europe is beset by renewed Russian aggression, a mass-migrant crisis and a growing terrorist threat. Brexit has now made NATO more important, but could also weaken it.

To overcome differences within the alliance and move forward in these troubled times, Obama should go beyond his usual low-key approach, while still working closely with allied leaders. If the summit falls flat and NATO falters, it will be another blow to the post-World War II European and global order.

NATO allies need each other now more than ever. Threats that once seemed distant have landed on Europe's doorstep. No single European nation can face Russia or ISIS on its own. With the UK leaving the EU, NATO is all that's left for meaningful cooperation against these threats.

After the blow Brexit dealt to the EU, Obama must do everything possible to avoid allowing a second pillar of the European order to suffer.

NATO could strengthen as a result of Brexit, but it might also grow weaker if Brexit increases uncertainty and reduces resources available for European defense. After the blow Brexit dealt to the EU, Obama must do everything possible to avoid allowing a second pillar of the European order to suffer on his watch.

This won't be easy. Challenges and divisions within the alliance abound. Allies along the Mediterranean are focused on migration and terrorism, while allies in Central and Eastern Europe are seized with the Russia threat.

A 2015 Pew poll found that while nearly all Europeans view Russia as a threat, more than half the French and German publics were unfavorable to using military force to come to the aid of an ally in a conflict with Russia.

Strong U.S. leadership has been crucial to keeping NATO together since its inception after World War II. U.S. leadership generates momentum that allows a diverse set of nations to overcome parochialism, recognize their common interests and realize the power of collective action against pressing security threats. At Warsaw, Obama has an opportunity to demonstrate exactly such leadership on several key issues.

To begin with, Obama should work closely with German Chancellor Angela Merkel to send an unwavering message to Russia about its aggression in Ukraine and persistent threats to the alliance. NATO has so far maintained unity in the face of Russia's aggression, but some allies may be seeking to weaken NATO's stance on Russia in hope of obtaining Moscow's support against ISIS or for more self-interested reasons.

But Russia's ability and its will to help counter ISIS are doubtful. Improved relations with Moscow may be desirable, but NATO cannot afford to soften its position without the strongest possible guarantees that Russia has eschewed the use of military force for territorial aggrandizement. The ball is in Russia's court, not NATO's.

Obama should also seek to ensure that allies follow through on their commitments to deploy four battalions into Central Europe. Given Russian aggression, NATO has no choice but to take prudent steps to shore up its defenses along its eastern flank.

Four battalions is a very small force compared to what Russia could bring to bear in a conflict and poses no threat to Russia's own security (although Moscow will surely portray it as such). These forces would, however, make an incursion into NATO territory even riskier for the Kremlin, and thus help prevent it. They could be augmented later if needed.

Obama should ensure a constructive vision emerges on terrorism and the migrant crisis. This may take the most leadership.

Obama should also ensure a constructive vision emerges on terrorism and the migrant crisis. This may take the most leadership. Some allies—including the host nation, Poland—fear these threats will distract scarce resources from deterring Russia. Others, such as France and Italy, have their own rationales for keeping NATO out of their former colonial spheres.

Yet terrorism and migration are the most salient issues for many allied publics and their political leaders. NATO alone will never be the solution to them, but it would be foolish and self-defeating to rule NATO out when it comes to addressing them.

Finally, lest the Congress object more strongly than it already has to America's role in Europe, Obama should insist allies go further in footing the bill for the alliance.

The United States now pays 70 percent of NATO's defense bill, versus 55 percent in 1999. Allies rely far too much on U.S. lift, intelligence surveillance reconnaissance, missile defenses, and other capabilities.

Most allies have halted the drastic budget cuts, but only Estonia, Greece, Poland, the United States and United Kingdom now meet NATO's target of 2 percent of GDP for defense spending. Even 2 percent is low given the threats on NATO's doorstep and fact that Brexit could reduce the UK's spending.

At the summit, allies also should consider changes to NATO's nuclear posture—specifically, its declaratory posture, which is the language with which NATO describes the role of nuclear weapons in its strategy. Cyber and space operations also need fresh attention. The follow-on mission to NATO's work in Afghanistan should be on the table.

Other longstanding issues, such as Georgia's aspirations for membership in the alliance will likely be swept under the rug. NATO's missile defense plans will likely be discussed, but not changed.

It is a core U.S. national interest that NATO remain a pillar of European and global security. NATO can grow stronger from the threats it faces, but especially after Brexit, if the alliance founders without strong U.S. leadership, Europe and America's security is bound to suffer.

This commentary originally appeared on Newsweek on July 8, 2016. Commentary gives RAND researchers a platform to convey insights based on their professional expertise and often on their peer-reviewed research and analysis.