This Is the Problem with Trying to Destroy the Islamic State 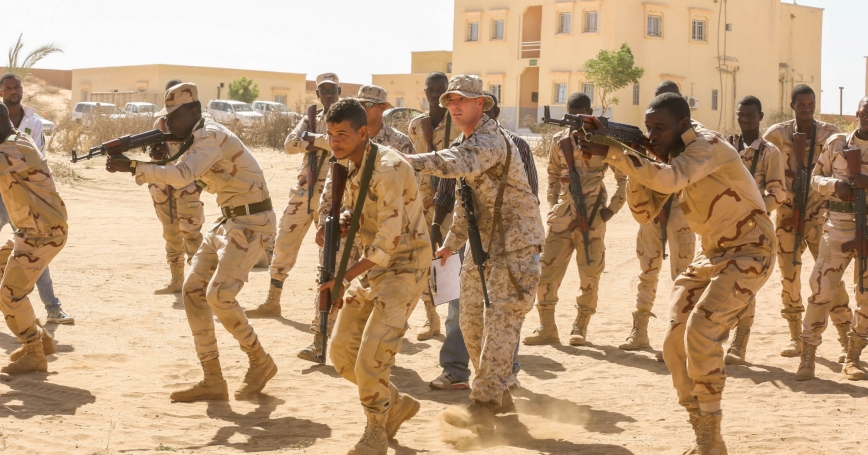 Would counterterrorism forces be better served by containing terrorist groups instead of attempting to destroy them? While causing a terrorist organization to break apart might seem like a positive outcome — indeed, this is one of the primary objectives of most counterterrorism campaigns — the fracturing of a terrorist organization often causes the emergence of new, and in some cases more violent, splinter organizations. Dismantling and destroying the Islamic State and similar organizations is a worthy strategic goal, but policymakers must also be prepared to limit the effectiveness of splinter groups as they emerge in the aftermath of a successful campaign against the parent group.

The Islamic State — a splinter of al-Qaeda in Iraq or AQI, which itself was previously a splinter of al-Qaeda — is one of many terrorist organizations that owe their emergence to the fracturing of a pre-existing group. Hezbollah, for example was an offshoot of the Afwaj al-Muqawama al-Lubnaniya (AMAL), formed in the early 1980s with help from Iran in response to Israel’s invasion of southern Lebanon. The Liberation Tigers of Tamil Eelam (LTTE) coalesced between the late 1970s and early 1980s from an assortment of Tamil rebel groups.

Other prominent splinter groups have flourished in Northern Ireland (the Real IRA), Algeria (the Salafist Group for Preaching and Combat) and Thailand (the New Patani United Liberation Organization). Splinter groups are often only slight variations on the original groups, with minor differences in ideology but more significant discrepancies over strategy, tactics and the utility of violence.

It is certainly possible that if the Islamic State is degraded to the point it is no longer such a threat, whatever supplants it could grow to be more potent than its predecessors.

That some of these groups have been more effective at sowing violence and discord than their predecessors is one of the unfortunate outcomes of effective counterterrorism campaigns. In several respects, the Islamic State poses a far greater threat than al-Qaeda in Iraq ever did. It has significant income flows from a variety of sources, controls swathes of territory on at least two continents and is capable of fomenting violence at great distances. It is certainly possible that if the Islamic State is degraded to the point it is no longer such a threat, whatever supplants it could grow to be more potent than its predecessors.

After all, the blueprint for success — evidenced in Iraq and North Africa — is now widely known: Gain a foothold in a failed state or ungoverned region, latch on to a marginalized ethnic or religious group, exploit local grievances, and lend guidance, resources, expertise and manpower to the fight. It is not difficult to imagine the Islamic State replicating this formula in any number of places.

Regions awash in weapons, plagued by poor security and weak rule of law are ideal options for splinter groups seeking to regenerate and exploit new bases of operations, if they choose to relocate abroad. The challenge for policymakers and practitioners is preventing these regenerated slivers from emerging stronger than before.

Think of it like this: The remnants of a largely extinguished fire must be stamped out before the embers can accelerate into a massive conflagration. Destroying a terrorist organization — and potentially creating splinter groups in the process — is less important than reducing its capacity to conduct operations that further its goals.

Potential group members can be absorbed into a broader political framework, as happened in both Spain and the Palestinian territories. The decision over whether to enter politics and leave behind violence is often a catalyst for splintering in the first place. Through power sharing or guarantees of greater autonomy, host-nation governments can work to ameliorate a range of existing grievances. While remnants of the organization remain, they are for the most part obliged to operate more or less legitimately.

In some cases — for instance, El Salvador, Liberia and Bosnia — certain elements of what previously constituted the insurgency or armed opposition become involved in the illicit economy and morph from terrorists to criminals, abandoning politics for profit.

Some splinter groups will be defeated through infighting. What were once hostile Sunni tribes in Iraq’s Anbar province were mobilized to attack AQI militants in what became known as the Anbar Awakening. Persuading the tribes to attack the hard-core elements of the insurgency was initially a success, although the Iraqi government’s failure to appropriately incorporate elements of these tribes into governance structures helped to create the conditions leading to the rise of the Islamic State.

Last, the host nation, either alone or with the help of an external power or coalition, can pursue an aggressive campaign to capture or kill the majority of the splinter group’s leadership and foot soldiers, as happened in Peru with Lima’s campaign against the radical group Sendero Luminoso.

When considering the Islamic State, what are the possible outcomes if the ongoing coalition counterterrorism campaign succeeds in smashing its core, causing it to splinter?

What might happen next? The inclusion of the Islamic State in any future political framework in either Iraq or Syria is a non sequitur. The Islamic State has not shared any political platform even mildly acceptable to even the most dysfunctional or harsh nation-state. If a political settlement in either Syria or Iraq were to gain traction, it is possible that elements of the Islamic State could continue to prosper as a violent criminal organization.

The Islamic State could eventually be defeated through insurgent fratricide, with the al-Qaeda-linked Nusra Front the most obvious candidate to fill the role of spoiler. Still, if the Islamic State feared it was facing extinction in Syria, its leadership might well decide to relocate the caliphate to Libya or someplace else where an existing offshoot might be bolstered.

It is possible that following the atomization of the Islamic State, its remnants could be stamped out by security forces in areas where it currently operates. However, the two primary factors that led to the resuscitation of AQI into Islamic State — the Syrian civil war and Baghdad’s marginalization of Iraqi Sunnis — show no signs of abating anytime soon.

If none of the above scenarios play out, countries within the broader region will continue struggling to disrupt the blueprint that enables splinter groups to deftly reconstitute into more effective fighting forces. The lack of security cooperation and intelligence-sharing between countries throughout the Middle East and North Africa affords militants the space to operate and gain traction.

Without surveillance of poorly governed areas to help reduce threats within these territories, host-nation security forces will remain unable to stem migration (and other martial-resource) flows to active areas of hostilities.

The two main factors that led to an al-Qaeda splinter growing into the Islamic State in the first place are nowhere close to being resolved. The Syrian civil war continues to rage, and the Iraqi government has yet to work earnestly to reach out to marginalized Iraqi Sunnis. Without progress toward addressing what are essentially two political issues, even successful counterterrorism tactics will allow room for splinter groups to emerge and grow stronger.

This commentary originally appeared on The Washington Post Monkey Cage Blog on July 12, 2016. Commentary gives RAND researchers a platform to convey insights based on their professional expertise and often on their peer-reviewed research and analysis.