Time for a Do-Over on Brexit 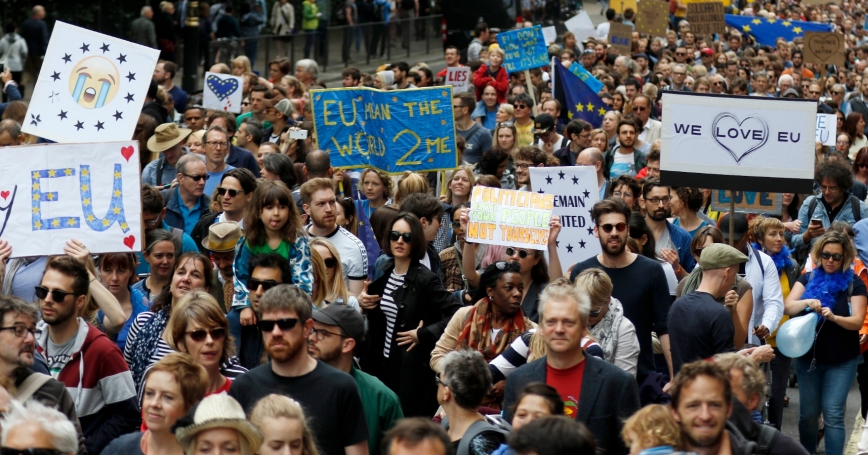 A "March for Europe" demonstration against Britain's decision to leave the EU, in central London, Britain, July 2, 2016

David Cameron, Barack Obama and Hillary Clinton have all expressed respect for the decision of the United Kingdom voters to leave the European Union. The public has spoken, and it is appropriate to recognize their right to decide. There is, however, no reason to regard their choice as irreversible — particularly given that leaving the EU is not in the interest of the U.K., its European partners or the U.S.

EU member states have an established method for dealing with unsatisfactory referendums. It's called a do-over. In 1992, the Danish people voted 50.7% to 49.3% against ratifying the treaty that established the EU. A year later they voted again, this time to ratify, by 56.8% to 43.2%.

Last week's Brexit vote was purely advisory. Any change in EU membership will need to be initiated by the government and approved by Parliament. Most members of Parliament do not want Britain to leave the EU.

Cameron, the British prime minister, has said that he will step down by September and leave his successor to initiate the process of withdrawal. Theresa May, the leading candidate to replace Cameron, has made clear that she will be in no hurry to trigger formal negotiations on withdrawal. She insists that these should be preceded by informal talks with other EU members. That could take months.

Even if and when formal negotiations are initiated, there will then be two years to reach an agreement. That agreement could result in something short of a British withdrawal.

As the consequences of Brexit become apparent, many voters will begin to have second thoughts. For example, the British pound this week hit a 31-year low against the dollar. Already, more than 4 million people have signed a petition to Parliament demanding a second referendum.

Even if Parliament turns down this appeal, a serious shock could still result in a new vote. If Cameron's successor cannot unite the divided Conservative Party, the government could fall, leading to new national elections in which Brexit would feature heavily. A vote by Scotland to leave the UK in order to remain linked to the EU could provoke such a crisis.

Most European governments are urging Cameron to accelerate the process of withdrawal in order to speedily resolve the many uncertainties roiling financial markets. Yet just as the right of the UK voters to decide on EU membership should be respected, so should their right to change their minds. Allies should demonstrate patience, forbearance and sympathy as people come to grips with the consequences of their latest vote.

In the run-up to all three of the previous do-over referendums, the EU made some slight gestures toward the holdouts. The Irish were assured that these agreements would not interfere with their neutrality or their laws on abortion. The Danes were allowed to opt out of the monetary union. None of these concessions slowed the broader progress of European unification, but they provided enough to change each nation's mind. Rather than hustling the UK out the door, European leaders should consider what sort of gesture might serve a similar purpose this time.

James Dobbins, a senior fellow at the non-profit, non-partisan RAND Corporation, served as assistant secretary of State for European Affairs from 2000 to 2001 and ambassador to the European Community from 1991 to 1993.

This commentary originally appeared on USA Today on July 6, 2016. Commentary gives RAND researchers a platform to convey insights based on their professional expertise and often on their peer-reviewed research and analysis.