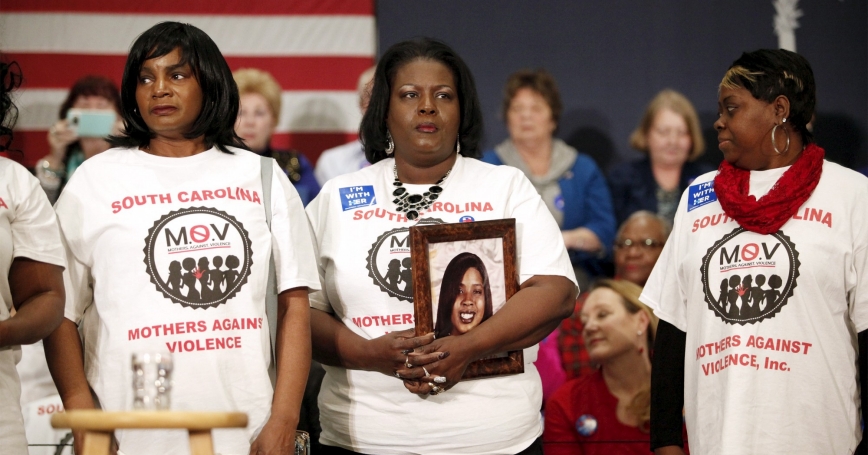 Barbara Hytower, holding a photo of her daughter Jamila who was murdered in Myrtle Beach, stands with other members of South Carolina Mothers Against Violence before the start of a rally, February 25, 2016

In the aftermath of shootings, there is inevitably a public debate about gun safety, constitutional rights, police tactics, terrorism, race and politics. But these discussions rarely focus on a common factor among the perpetrators — a history of violence against women.

Reports suggest that the shooter in Dallas left the Army after a sexual harassment charge. The Orlando shooter allegedly abused his first wife. The Colorado Springs Planned Parenthood shooter was accused of sexual assault, domestic violence or stalking by three different women, including his then-wife. The Sandy Hook shooter targeted his mother. And though the police have released little information about the Baton Rouge shooter, a suspect who opened fire on a Milwaukee police officer that same day was a domestic violence suspect. The list goes on and on. And each time there's a shooting that grabs national headlines, the debate centers on gun control and the Second Amendment. Now it's time to further explore the connection between violence against women and murder.

This goes beyond anecdotes. Recent research drawing on FBI data and media reports between 2009 and 2014 analyzed all shootings that resulted in four or more deaths and found that 57 percent of mass shootings targeted family members or intimate partners. In those shootings, 64 percent of the victims were women or children.

While these statistics are troubling, they may point to a means to help reduce violence. Existing research suggests that "by far, past violence is the best static predictor of future violence," and a detailed analysis (PDF) of the cases of over 300,000 ex-convicts, including those with a history of violent offenses, found that offenders with domestic violence charges were the most likely to commit another violent felony. Of course not all of these felonies will be mass shootings, but some will and so policies to identify, punish and prevent access to dangerous weapons by abusers may be a key means to reduce all violent crimes, including mass shootings.

In many cases, the core aspects of the policies are already on the books, though the coverage and efficacy varies by state. That variation, however, introduces substantial risks as some victims may be reluctant to report abusers, abusers are not always appropriately identified and gaps in laws allow known abusers to obtain dangerous weapons.

Once a victim reports, the crime must be appropriately categorized as "domestic violence" if it is to prevent abusers from obtaining weapons under existing restrictions. This does not always happen, because of the "boyfriend loophole" in many existing laws that does not categorize physical assaults on unmarried partners as domestic violence. Moreover, stalking is often not covered by existing laws aimed at restricting access to guns.

Even if the abuser is appropriately categorized as a domestic violence offender, the offenses must then promptly be entered into the system that is used for criminal background checks for gun purchases. Unfortunately, according to a recent GAO study, states vary greatly in the degree to which this information is entered, delaying the FBI background check results. The delay is particularly dangerous given so-called "default proceed" laws which allow sales to happen if information is not available within 72 hours.

Many of the public debates after mass shootings focus on the trade-off between public safety priorities, like reducing gun violence and combating terrorism, and individual rights, like those of legitimate gun owners and others. But there is no such trade-off when considering those who commit intimate partner or family violence. The Supreme Court has clearly ruled that domestic abusers do not have a right to own firearms and most states and the federal government already have laws prohibiting ownership. Moreover, members of both political parties have and continue to support efforts to end domestic violence from the Violence Against Women Act to recent efforts to strengthen federal laws that prevent abusers from purchasing weapons.

The dialogue on gun violence could be advanced by including discussion of its links to intimate partner violence and how addressing those issues may be part of a solution.

Radha Iyengar is a senior economist at the nonprofit, nonpartisan RAND Corporation.

This commentary originally appeared on U.S. News & World Report on August 2, 2016. Commentary gives RAND researchers a platform to convey insights based on their professional expertise and often on their peer-reviewed research and analysis.