From the Battlefield to the Boardroom: Transferring Veterans' Skills to the Civilian Labor Market 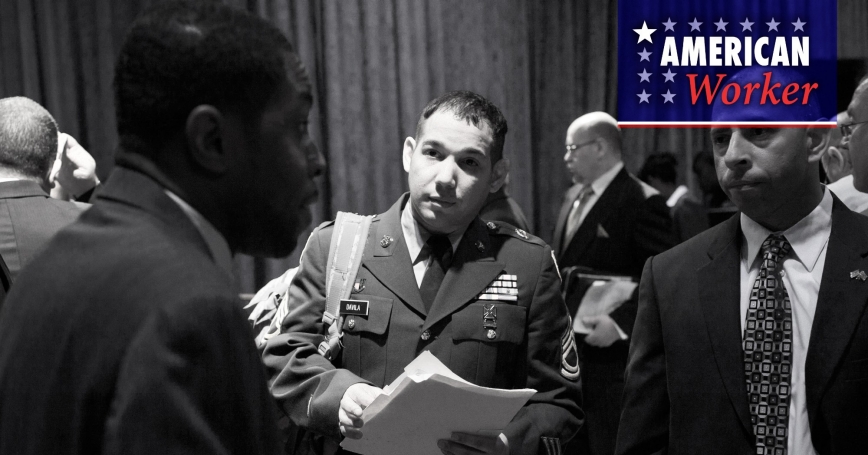 Sergeant First Class Steven Davila listens to a spokesperson for the Department of Veteran Affairs at a job fair in New York City, March 28, 2012

When defining the profile of today's American worker, it is critical to include military veterans who comprise nearly 7 percent of the U.S. labor force. More than 2.8 million men and women in uniform have served America since September 11, 2001, gaining unparalleled experiences and skill sets while doing so. Over the next decade, RAND estimates that the number of returning veterans will grow to 4.2 million—a robust talent pool that can be an asset to the civilian workforce. However, even as the value of these American workers is appreciated, the transition from battlefield to boardroom is not always seamless.

Perhaps one of the greatest challenges facing veterans as potential employees is matching military experience to civilian job requirements (and vice versa). The skills that veterans have gained through military experience must be translated into terms that are understood by civilian employers. Likewise, military veterans need to be able to recognize how their talents align with positions in the civilian job market. For service members in certain career fields, this translation is fairly straightforward. The skills of an Army medic, for example, are readily matched to those of a civilian EMT. Similarly, a logistics officer may find his or her training readily applicable to supply chain management in the civilian sector. Yet for service members in other career fields, particularly infantry and similar specialties that are more operationally-focused, the skills acquired in the military may not be as apparently relevant to civilian employers.

Employers recognize that skills like leadership and the ability to work in teams are qualities that veteran employees bring to the table.

To overcome this ambiguity, veterans and civilian employers must look beyond the technical skills gained through military service to other attributes, frequently referred to as soft skills, which are equally valuable. RAND research has found that employers recognize that skills like leadership and the ability to work in teams are qualities that veteran employees bring to the table and often make them stand out from their nonveteran counterparts. Federal resources are available to assist veterans in articulating their full range of skills to civilian employers. Some companies are working to bridge this gap as well by ensuring their recruiting staff includes military veterans who can speak the language and interpret the resumes of transitioning service members. But the effectiveness of these initiatives, whether public or private, has not been broadly assessed.

Skill translation is not the only challenge a service member may face when transitioning to the civilian workforce. Many civilian career fields require licenses or certifications as a condition of employment, which veterans must obtain even if they have honed relevant skills as part of their military training. For example, veterans who drove trucks in the military will still need to go through commercial driver licensing before applying for civilian truck driver positions. In some cases the process can be expensive and lengthy and there can be uncertainty about which certifications are truly in demand by civilian employers. These barriers can make it difficult for service members to obtain jobs for which they are otherwise well qualified. Stakeholders at the federal and state levels are taking steps to help service members obtain relevant licensing, sometimes while still in uniform. But such programs will be limited in scope and are typically not evaluated to ensure that the resources spent will pay off for veterans in the job market.

Effective veteran employment programs must not be limited to helping military veterans find positions best aligned to the technical skills gained during a military career. Like many civilians whose interests change during the course of a career, some veterans see their transition out of uniform as an opportunity to change career paths to one that emphasizes different skills. For this reason, the focus of many efforts devoted to assisting service members in transitioning to civilian employment has shifted from simply finding a job to developing meaningful careers over the longer term.

An emphasis on the softer skills gained during military service paired with appropriate training to address technical skill gaps may be a better route for some veterans, providing them with the tools to embark on a civilian career in a new field. And employers who are able to take this longer-term view as well are likely to be rewarded with higher retention of their veteran employees. A thoughtfully coordinated transition that begins well before separation can help veterans find civilian employment that sticks—a win-win outcome for both employer and employee.

Military veterans are American workers who contribute a unique set of skills and attributes that make them a boon to the civilian workforce. For civilian employers to fully benefit from this talent, resources must continue to be invested to support service members' transitions to the civilian workforce. We have identified several areas where attention will be needed for some time to come: skills translation, certification and licensing, and comprehensive career counseling. Continuing to invest in these and other areas will help facilitate successful career transition for the millions of service members who will enter the civilian workforce in the years ahead.

Kimberly Curry Hall is a policy analyst at the nonprofit, nonpartisan RAND Corporation.