Health and Safety at the Rio Olympics: It's Not Just About Zika 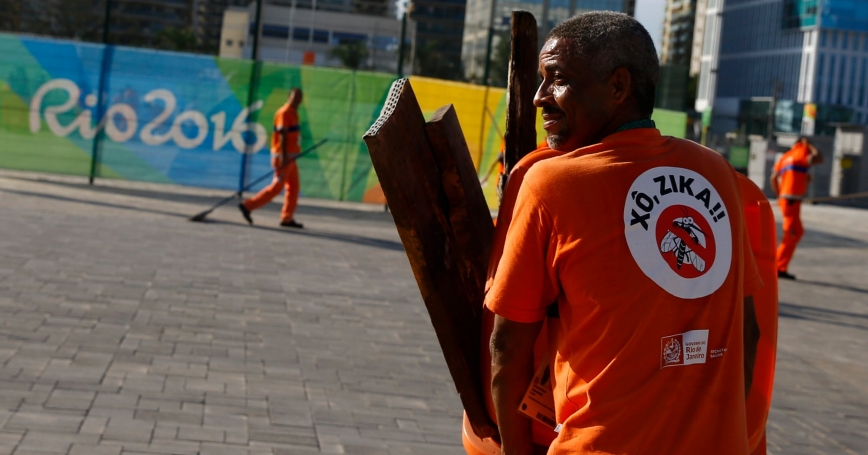 A worker wears a sign that reads "Shoo Zika!" in Portuguese on his back in Olympic Park in Rio de Janeiro, Brazil, July 31, 2016

For the past several months, we have seen wide ranging advice about the Zika virus and whether to travel to Rio de Janeiro for the Olympics; there were even calls to move or postpone the 2016 Games because of the perceived threat.

On the one hand, concern about the Zika virus is warranted because of the devastating consequences in some babies whose mothers are infected during pregnancy. And indeed, Brazil is the epicenter of the Zika outbreak that has now spread throughout nearly all of South and Central America, Mexico, and the Caribbean. But Zika is already on the wane during these winter months in Brazil, as temperatures become cooler and the vector mosquitoes less active.

While the Zika risk will not drop to zero in the coming weeks, there are other things to think about when it comes to health and safety at the Rio Olympics.

A good place to find prudent advice is the Travelers' Health section of the Centers for Disease Control and Prevention's website. Yes, CDC does provide explicit advice about Zika and the Rio Olympics: Pregnant women should not travel to areas where Zika is still actively transmitted, including (but not limited to) Brazil; men with a pregnant wife/partner should take precautions against transmitting the virus through sexual contact with their partner after returning from an area with active Zika transmission (including Brazil); and people who travel to such areas should try to protect themselves from mosquito bites by using insect repellent and wearing protective clothing.

What the media is not necessarily reporting, but savvy travelers and their doctors know, is that there is a broader range of health and safety concerns for which travelers can and should take specific precautions.

On the health side, the CDC provides a wealth of information and advice related to travel to any country in the world. The brief version of advice for travelers to Brazil, not specific to any particular season, is to make sure routine vaccinations are up to date, eat and drink safely, keep away from animals, avoid sharing body fluids, take antimalarial medications, prevent bug bites, reduce exposure to germs, and avoid non-sterile medical or cosmetic equipment. Some version of those same precautions is found for travel to many other countries around the world, and this advice warrants heeding. A traveler to Brazil is much more likely to become ill from consuming unsafe food or beverages; for example, the very tempting food from street vendors or contaminated ice in beverages. The European CDC published a health risk assessment related to the Rio Olympics and reached similar conclusions: The risk of contracting Zika is low, whereas the risk for gastrointestinal illness is moderate and the risk for influenza — as it is winter in Brazil — is moderate to high.

On the safety side, the U.S. State Department's Bureau of Diplomatic Security issues crime ratings for countries worldwide. Brazil's crime rating for 2015 was “critical,” with street crime and large organized gangs that target civilians. Travelers should be aware and careful about such threats, especially at night.

With athletes from more than 200 countries and an expected half million visitors to Rio for the Olympic Games, is there a possibility of their bringing the Zika virus back home? Even though the risk of contracting Zika is expected to be low, the CDC has identified 19 countries that have not reported Zika outbreaks but have the required environmental conditions for Zika transmission: mosquitoes that can spread Zika virus, current high temperatures and rainfall, and a susceptible population. For 15 of these 19 countries, there is already enough travel to countries with active cases of Zika that travel to Rio for the Olympics does not pose significant additional risk of bringing Zika back home. However, for the remaining four countries — Yemen, Chad, Djibouti, and Eritrea — the regular volume of air travel to areas affected by Zika is very low. For travelers from these countries, visiting Rio does pose a risk that would be attributable to travel for the Olympic Games.

Likewise, persons returning from Rio to areas with the types of vector mosquitoes that can spread the Zika virus (in the United States, much of the southern third to half of the country) should protect themselves against mosquito bites for three weeks after getting home. Why? Because they might be infected without knowing it — about 80 percent of infections are asymptomatic. A mosquito could bite a person, acquire the virus, and then transmit it to someone else nearby a week or so later.

While public health officials are always attentive to the possible introduction of infectious-disease risks into “mass gatherings” of people from around the world — including the Olympics, the FIFA World Cup, the annual pilgrimage to the Haj, and others — the risk of someone bringing Zika to the Rio Olympics would not trigger further disease spread.

By now, people have already decided whether to travel to the Rio Games. They have weighed the benefits against the risks in deciding to see the Olympics in Brazil or from their television set at home. Hopefully, all travelers to Rio will understand how to protect themselves against the very low risk of Zika virus infection as well as the greater risks of gastrointestinal infection or flu; and hopefully they will heed the full range of advice from CDC and others about protecting their health and safety while traveling and protecting the health of others upon their return home.

It is eminently possible — and probable — to enjoy health and safety at the Rio Olympics. Let the Games begin.

Melinda Moore is a public health physician, senior natural scientist, and an associate director of the Population Health Program at the nonprofit, nonpartisan RAND Corporation. She is also a professor at the Pardee RAND Graduate School.

This commentary originally appeared on The Mark News on August 4, 2016. Commentary gives RAND researchers a platform to convey insights based on their professional expertise and often on their peer-reviewed research and analysis.