Infrastructure Design Must Change with Climate 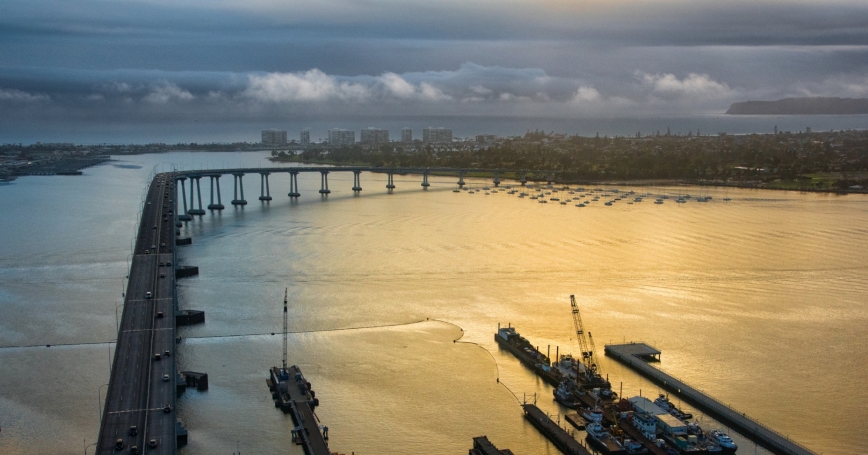 Aerial view of the Coronado Bridge, which connects San Diego and Coronado, at dusk

Engineers have always taken climate into account when designing the infrastructure on which our lives depend. When building bridges, engineers have long considered how fast a river might flow or how strong the wind might blow. When designing roads, they consider how hot temperatures might be or how high flood waters might rise. When designing dams and reservoirs, engineers consider precipitation patterns and the frequency of floods and droughts. Commercial and residential buildings and the electric grid also require engineers to consider the forces of climate they need to withstand. Until recently, engineers could confidently use data on past weather to predict future climate.

But this is no longer true. Increasingly, engineers must consider the effects of climate change. For any given infrastructure system, past climate is no longer a good predictor of future climate. Past standards no longer provide an adequate guide to design and build safe, resilient structures in the face of more extreme climatic forces we are starting to experience as a result of global warming. Engineers need a new blueprint to prepare for a future that's hard to know.

Considering climate change can make a huge difference in infrastructure design. And since climate impacts are location-specific, it makes sense to address concerns regionally. Take, for example, California, where studies suggest that the impacts of climate change on infrastructure could be great. Cooperation between scientists and engineers could go a long way toward making the state's future infrastructure safer. Failure to plan for climate change in the design of infrastructure poses a real threat to public safety and the ability to meet environmental quality goals.

But where can engineers get actionable information about future climate? And how should they incorporate this information into their designs? In contrast to the historical climate record, scientists have produced many different projections of future climate. This new information comes from a range of sources, including climate models that project into the future and scenarios crafted from records of historical climates hundreds or thousands of years ago, which were often very different than they are today. Should engineers try to choose and use what they regard as the best projection? Or should they use all the projections to build infrastructure that is prepared for anything that may come, even though it may prove more costly?

The best way to answer such questions is for engineers to work closely with scientists and risk analysts to understand what types of climate information proves most useful in what situations. For instance, climate scientists are increasingly producing large databases of climate projections for users. But these databases don't always include the information engineers may need (e.g., the number of days a road might exceed some threshold temperature). In addition, information about future climate is often uncertain, so engineers must develop rules for appropriately and effectively managing costs and risk.

Fortunately, there are solutions. Around the world, many groups are engaged in what the literature calls the “co-production” of knowledge as one key part of effective systems of decision support. Such co-production of knowledge requires engineers and other users working together with climate scientists and risk analysts to determine what the former need to know and how the latter can provide it.

It might make sense for California to establish its own committee of engineers and scientists to recommend the best procedures and sources of information to enhance the climate resilience of California infrastructure.

A bill currently before the California legislature would do just this. The Climate-Safe Infrastructure Act would require state agencies to take into account the expected impacts of climate change when planning, designing, building and investing in state infrastructure. As one central element, the bill would enable collaboration among state scientists and engineers in recommending new design standards for state infrastructure that incorporates the current and future impacts of climate change. As both theory and practice make clear, such “co-production” of knowledge among the users and producers of climate information is an essential pillar of a best practice response to climate change. Such decision support initiatives are critical to connecting science, risk management and decisionmaking in the face of uncertainty.

California spends roughly $10 billion a year on its infrastructure. Citizens expect these investments to perform well and protect public safety regardless of the climate. To ensure such resilience, the state's engineers and scientists could work together to develop best practices for reliable climate-safe infrastructure projects that will protect lives, deliver economic benefits and last for many decades to come.

Robert J. Lempert is a senior scientist at the nonprofit, nonpartisan RAND Corporation and director of the Frederick S. Pardee Center for Longer Range Global Policy and the Future Human Condition.

This commentary originally appeared in Orange County Register on August 12, 2016. Commentary gives RAND researchers a platform to convey insights based on their professional expertise and often on their peer-reviewed research and analysis.