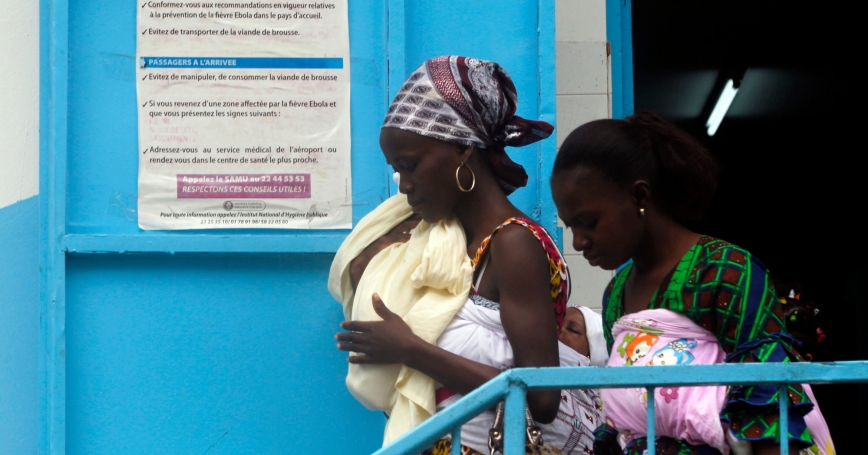 Women and babies at a maternity hospital in Abidjan, Ivory Coast, August 14, 2014

by Peter Glick and Sebastian Linnemayr

Sub-Saharan Africa (SSA) continues to have much higher fertility and lower contraceptive usage than any other region: the contraceptive prevalence rate of 22 percent is less than half that of South Asia (53 percent) and less than a third that of East Asia (77 percent).

This is despite evidence of strong benefits to reduced fertility or relatedly, to greater spacing between births and delayed start to childbearing. These include reductions in maternal mortality and unsafe abortions, better maternal nutritional status, reduced risks from early childbearing, and women's ability to engage in a wider range of income-generating opportunities. Child health and survival as well as education are also causally related to delayed childbearing, greater birth spacing and (possibly) to smaller overall family size. The recent publication of The Demographic Transition in Africa: Dividend or Disaster? by the World Bank highlights the multisectoral nature of the variables involved in a successful demographic transition.

One reason contraceptive use lags in SSA in spite of apparent benefits clearly is that supply or availability is not adequate, at least in some countries. However, even when family planning services are available, demand or uptake often remains low. This may be because when individuals or couples make decisions about using contraceptives or having another child, they do not, for various reasons, take into account the costs to others of having more children (or conversely, the benefits of having fewer children). These unaccounted benefits or costs, known as positive or negative externalities, mean that families have fertility levels that are higher than they would be if all such benefits or costs were properly taken into account. From a societal perspective, fertility is higher than optimal in SSA.

We are used to thinking about externalities in terms of depletion of commonly held resources such as land or water, and this is indeed a potentially significant negative externality of population growth, hence fertility choices, in SSA. However, important externalities can exist at the level of the household as well. Consider, for example, the benefits to child health and survival from smaller families (or more widely spaced births). If parents do not take into consideration these benefits to children—or conversely, the costs to children of larger families—they will tend to have higher fertility than is socially optimal. This may happen if parents put a premium on their own needs for having more children to help in housework or farmwork, or if parents are unaware of the benefits to the child and mother's health of fewer, more widely spaced births.

Another kind of externality which may explain low contraceptive prevalence rates in SSA—and for which strong if indirect evidence exists—arises from gender differences in fertility preferences combined with imbalances in household decisionmaking. Household surveys and ethnographic studies in the region indicate that women overall prefer smaller families than their spouses, and view modern contraception more favorably than husbands—in fact, some studies show that women hide their contraceptive use from their spouses.

At the same time, evidence shows that women in African contexts often have less say than men over key household decisions, including presumably, fertility.

This leads to an externality: the decisionmaker (the husband) does not fully consider the costs of higher fertility, as these fall largely on someone else (the wife). The costs incurred by the wife include the huge time burdens of pregnancy and child rearing tasks as well as the health risks of childbearing, which are largely or completely borne by her—which of course is likely why women prefer to have smaller families than do men.

The externality leads to an excess of fertility because contraception and family size decisions do not fully incorporate the true costs of additional children. As an externality, this provides a clear rationale for government action—in the form of outreach to husbands, reductions in the cost of contraception to increase uptake (since both men and women should be responsive to this incentive, whatever their preferences for family size), or possibly—as in one recent trial in Zambia—making it easier for women to use contraceptives without their partners' knowledge.

There are, of course, other important rationales for expanding family planning in SSA (and elsewhere), including that individuals should have control over their own childbearing and reproductive health as a matter of individual rights. However, the economic argument based on externalities offers an additional powerful reason for governments in SSA as well as donors to invest in family planning.

Peter Glick is a senior economist at the nonprofit, nonpartisan RAND Corporation and a professor at the Pardee RAND Graduate School. Sebastian Linnemayr is an economist at RAND.

This commentary originally appeared on The World Bank Investing in Health Blog on May 10, 2016. Commentary gives RAND researchers a platform to convey insights based on their professional expertise and often on their peer-reviewed research and analysis.