The West Must Do Far More to Keep Putin at Bay 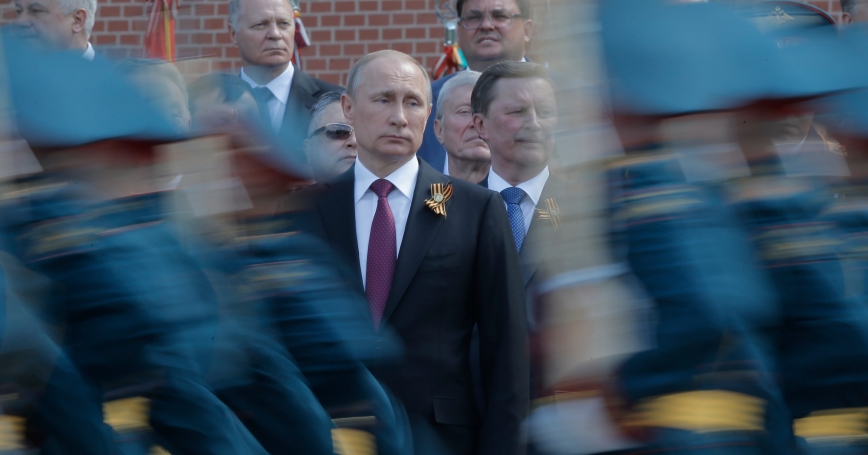 Russian President Vladimir Putin watches honor guards during a wreath-laying ceremony near the Kremlin in Moscow, May 9, 2016

by William Courtney and David A. Shlapak

Last month in Warsaw, Poland, NATO leaders vowed to make the alliance “stronger in defense and deterrence.” While progress was made, there is reason to doubt its adequacy.

America continues to decline to provide Ukraine and Georgia with advanced defensive weapons or to challenge Russia's airpower supporting the Syrian regime's siege of Aleppo.

Is the West doing enough to dissuade and deter Russian misbehavior?

In a series of war games, the RAND Corporation examined the shape and probable outcome of a possible Russian invasion of the Baltic States. RAND found that “as currently postured, NATO cannot successfully defend” them. Russian forces would reach the edge of Riga, Latvia, and Tallinn, Estonia, in 60 hours or less.

Gaming also showed that a NATO force of about seven land force brigades (three armored), backed by airpower and other enablers, could avert a rapid overrun and force Moscow to weigh the risks of a prolonged and serious fight.

How is NATO addressing this risk? In Warsaw, NATO leaders opted for a tripwire response short of what RAND's analysis would recommend. Yet, as President Barack Obama correctly noted, it will be NATO's “most significant reinforcement” since the Cold War.

In support of its mission of collective defense, the alliance will deploy four rotating battalion-sized units to Estonia, Latvia, Lithuania, and Poland, buttressing their forces. (A brigade has two to five battalions.)

Reinforcing them at a remove, America will add the equivalent of an armored Army brigade to two existing Army brigades in Europe. In addition, equipment for a U.S. Army division will be stored there. These steps send an important signal of commitment but are insufficient to present an adequate conventional deterrent to aggression.

Georgia and Ukraine, not being NATO members, receive less support. America has provided over $600 million in security assistance to Ukraine since Russia's invasion in 2014. Among its purposes are battalion-level training and the provision of critical non-lethal equipment, such as counter-artillery radars, secure communications and tactical drones.

At a more modest level, Washington is beginning to train Georgian forces in territorial defense. Both countries seek advanced lethal defensive arms, such as the U.S. Javelin anti-armor missile. To date, Washington declines to supply it.

Some who oppose arming Ukraine say that doing so would only cause Russia to inject more military force. However, there appear to be limits to Moscow's willingness to raise the stakes.

In the summer of 2014, Russia's insertion of conventional forces to shore up rebel allies prevented their defeat, but Moscow eschewed escalating further. President Vladimir Putin stopped talking about “Novorossiya,” all of eastern and southern Ukraine.

In recent weeks, however, Russia has again built up forces in and near Ukraine and conducted exercises that it could use as a cover for surprise attack. This again raises the issue of the West's providing additional aid to Kiev to help it deter and defend against aggression.

U.S. aversion to a military role in Syria except against ISIS has kept the West on the sidelines as Russia's airpower helps Assad's forces lay siege to Aleppo. America's restraint also imperils the partial cessation of hostilities in Syria agreed to last February by Russia and America, and robs the West of leverage to promote negotiated outcomes.

By committing only to a light special forces footprint in Syria, the West has far less clout than Russia. U.S. pledges that “attacks on Syria's civilian population are never to be tolerated” have lost meaning.

The West may be doing less than it should to dissuade Russia from undermining Western interests.

Perhaps Moscow is already deterred from expanding aggression in Europe and supporting Assad's brutality. Perhaps the Kremlin is heightening military pressure only to strengthen its diplomatic hand. Perhaps Russia will exercise restraint because of its weak economy, isolation from the West, and armed forces that are far smaller than NATO's.

Nonetheless, renewed military pressure on Ukraine and stepped up bombing in Syria—also now staged from Iran—suggest that the West may be doing less than it should to dissuade Russia from undermining Western interests.

A key reason is that Russia is more willing to use military power even though it has less of it. Despite the decisions in Warsaw, the West ought to take another look at whether its efforts to deter Russian military interference are sufficient.

William Courtney is an adjunct senior fellow at the nonprofit, nonpartisan RAND Corporation and was U.S. ambassador to Kazakhstan, Georgia, and a U.S.-Soviet nuclear testing commission. David Shlapak is a senior defense researcher at RAND.

This commentary originally appeared on Newsweek on August 27, 2016. Commentary gives RAND researchers a platform to convey insights based on their professional expertise and often on their peer-reviewed research and analysis.