What's in a Name? The Rebranding of the Nusra Front 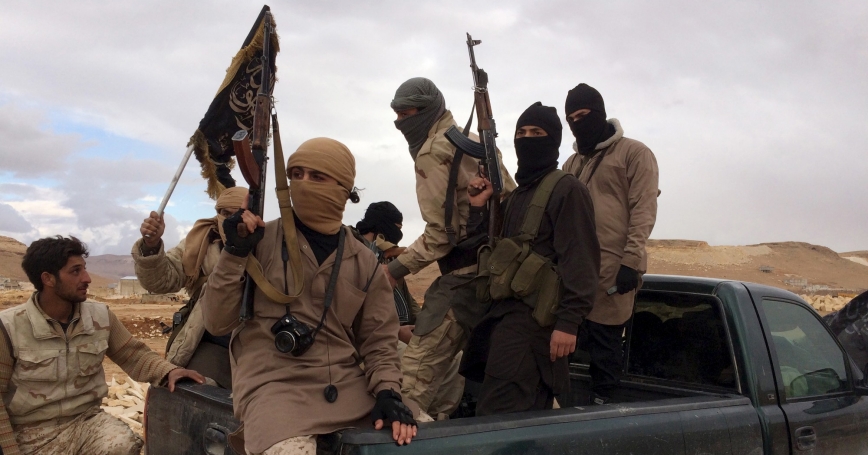 Al Qaeda-linked Nusra Front fighters enter the back of a pick-up truck in Arsal, Lebanon, December 1, 2015

When Abu Mohammad al-Julani, commander of the al Qaeda franchise in Syria, Jabhat al-Nusra, or the Nusra Front, announced last month that his group was severing its affiliation with al Qaeda, he said Jabhat al-Nusra — which means the “Support Front for the People of al-Sham,” a geographic term for the region of greater Syria or the Levant — would henceforth be known as Jabhat Fateh al-Sham, or the “Front for the Conquest of al-Sham.” A statement by al Qaeda leader Ayman Al-Zawahiri confirmed the split, saying it was amicable and had been approved by al Qaeda leadership.

What does it mean? Less than meets the eye, but, like any desert mirage, it tells us something about the local atmosphere.

The newly minted Jabhat Fateh al-Sham is just one of many formations, fronts and coalitions that comprise the forces arrayed against Syria's government. Others include the Free Syrian Army, the Syrian Revolutionaries Front, Soldiers of al-Aqsa, Knights of Justice Brigade, the Islamic Movement of the Free Men of the Levant, the Supporters of the Religion Front and the infamous Islamic State in Iraq and Syria (ISIS).

The names and composition of these groupings shift like the dunes in a desert sandstorm.

The names and composition of these groupings shift like the dunes in a desert sandstorm. Their continuously changing order of battle reflects the changing fortunes of war, ideological divisions — mainly between the more secular and more Islamist elements of the rebellion — and the efforts of external powers to unify and strengthen the insurgency while isolating its jihadist extremists. The names provide clues to their beliefs but it is more complicated as the Islamists themselves represent degrees of commitment to a holy war against all infidels and the ultimate imposition of a fundamentalist Islamic State.

Ambitious leaders and ideological agendas turn quarrels into bloody confrontations in which rebels kill rebels, but survival and success also require a degree of pragmatism. Syria's rebels have fought each other, but at times also cooperate against Syrian government forces.

Counterterrorism analysts see the current departure of the Nusra Front from al Qaeda's constellation as merely a rebranding that will allow the Nusra Front to create a broader Syrian coalition of radical Salafist-oriented rebels (and possibly some secular rebel formations) in which the Nusra Front is the most powerful group. One possible obstacle to this rebel coalition was the Nusra Front's link to al Qaeda, which other groups fear would make them targets of U.S. and Russian bombing and interfere with the funding they receive from Gulf nations. These risks became more urgent as the United States and Russia appeared to be cooperating more closely in going after the jihadist components of the Syrian rebellion.

Breaking with al Qaeda could also make it easier for the Nusra Front's external supporters to continue their funding. Qatar reportedly had suggested months ago that the Nusra Front break with al Qaeda in order to join the peace negotiations. The rebellion's supporters in the Gulf and Turkey will welcome the move. And their continued support will keep the insurgency going against the Iranian-backed Bashar Assad regime — for them, the real target.

The United States has been cautious in its attacks on the Nusra Front compared to those on ISIS. Shortly after the United States began bombing ISIS in 2014, it extended its campaign to Syria, where a cell of seasoned al Qaeda veterans from Afghanistan called the Khorasan Group had set up shop in Syria under the Nusra Front's protection, supposedly to launch terrorist attacks against the West.

Whether the Khorasan Group was a component of the Nusra Front or a separate mission from al Qaeda was not clear, but it caused great alarm. At the time, U.S. intelligence officials said that the group posed a threat to the United States equal to that of ISIS. But a number of Western analysts remain skeptical that the Khorasan Group has ever posed a significant terrorist threat.

The Nusra Front has previously indicated that it does not intend to be a launching pad for terrorist attacks on the West, but instead would focus on the Syrian struggle, an approach that also has been endorsed by al Qaeda leader Zawahiri. The objective is local progress.

Whether the Nusra Front believes it will avoid being targeted by American bombing itself is not clear — thus far, U.S. officials have dismissed the name change, saying it will not alter current policy. But to the extent that the rebel formations coalesce, any attacks on them will be more difficult and risk weakening the pressure on Assad to step down. The Nusra Front's maneuver will buy no respite from the Russians as they have never had any qualms about hitting any of the rebel formations, jihadist or secular.

This is more speculative, but the Nusra Front also might want to at least superficially distance itself from al Qaeda to facilitate receiving foreign fighters fleeing ISIS as it is gradually being ground down. There is true hostility between the leadership of the Nusra Front and ISIS, although the two organizations have in the past cooperated in some areas, but loyalties among the lower-level commanders and rank and file have been more fluid. A name change could lessen the humiliation involved in a loyalty switch.

At the same time, not all of those in the Nusra Front may be pleased with anything that looks like a softening of its hard jihadist line, which is why Zawahiri's endorsement was needed. The Nusra Front does not want to lose its own firebrands to ISIS.

It will be interesting to watch whether the United States promptly designates the newest incarnation of the Nusra Front as a terrorist organization.

It will be interesting to watch whether the United States promptly designates the newest incarnation of the Nusra Front as a terrorist organization. No one should be fooled into believing this is anything more than a tactical ploy, but as such, the pretext could have some utility in facilitating a solution that allows the United States an off-ramp from the Syrian conflict.

The United States still harbors hopes of a grand bargain that will end the Syrian conflict, but putting Syria back together again is a long way off. An interim solution could be a local accommodation that reduces the violence and leaves in place some sort of Sunni entity governed by a rebel coalition. Could that include the Nusra Front, which is now certainly one of the most powerful of the non-ISIS formations? It would be easier to do so if it were not an overt al Qaeda branch.

Critics have already expressed fears that the Obama administration will be taken in by the Nusra Front's deception and naively (or wittingly) use the political ruse as an excuse to stop bombing the Nusra Front. They want to ensure that the new name brings no reprieve in the campaign to destroy all jihadists.

Foreign diplomats trying to advance their own national interests on this shifting political terrain find principles and strategy replaced by Byzantine maneuvers and endless arabesques. For America's partners in the region, this may be more familiar territory.

For Americans, whose political rhetoric expresses itself in immutable terms — black-and-white contests of good versus evil — and whose military doctrine demands clear, achievable objectives, this is treacherous ground. But if American politicians and policymakers are going to see homeland security as directly dependent on some level of continued U.S. military engagement in the Middle East, North Africa and Afghanistan where sectarian and tribal politics still prevail, the United States is going to have to better understand and appreciate the local political and military realities.

Jenkins is a senior adviser to the president of the nonprofit, nonpartisan RAND Corporation and director of the National Transportation Security Center at the Mineta Transportation Institute.

This commentary originally appeared on The Hill on August 8, 2016. Commentary gives RAND researchers a platform to convey insights based on their professional expertise and often on their peer-reviewed research and analysis.