Why Syria's War May Be About to Get Even Worse 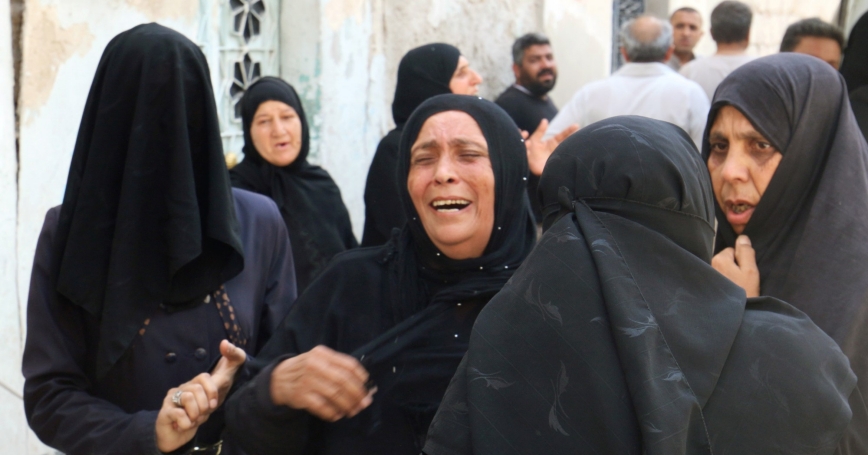 Women mourn the death of their relatives after an airstrike in the rebel held Bab al-Nairab neighborhood of Aleppo, Syria, August 25, 2016

How important is a name to a terrorist group's identity? When the militant organization Nusra Front announced recently that it was calling itself something else, analysts had good reason to be skeptical about whether the new label really did signal a genuine break from its parent organization al Qaeda. In fact, it probably doesn't matter. Even if symbolic, the mere rebranding of Nusra could be enough to prolong Syria's civil war.

The worst-case scenario is that the group, now known as Jabhat Fateh al-Sham (JFS), or Front for the Conquest of the Levant, could embed itself within the Syrian rebel opposition and emulate the staying power that Hezbollah has demonstrated in neighboring Lebanon.

The likely motive behind JFS announcing such a split, whether real or simply a feint, is an attempt to unite the disparate Syrian rebel groups into a more coherent force and allow JFS to further ingratiate itself within the broader rebel movement.

Indeed, JFS's recent deployment of its battlefield acumen in helping to break the government siege of the strategic Syrian city of Aleppo, along with a television interview given by a JFS spokesman, shows that this is already happening.

Moreover, by publicly disassociating itself from al Qaeda, JFS is seeking to maintain a lower profile with respect to its adversaries, namely the the Russian-backed Bashar al-Assad regime and the United States-led coalition, which are at the moment more focused on defeating Islamic State. So far, at least, the rebranding has failed to convince the Obama administration of the group's true intentions. That also doesn't matter. As Daveed Gartenstein-Ross, a counterterrorism scholar, has pointed out, Washington is not the intended audience of the JFS statement. That distinction belongs to the Syrian rebels and wider civilian population within Syria, as well as countries like Saudi Arabia, Turkey and Qatar, which will feel more at ease arming or aiding the militants now that they have publicly distanced themselves, even if in name only, from al Qaeda.

What should matter to the West is the strategic implications of Nusra's new name.

What should matter to the West is the strategic implications of Nusra's new name. For starters, JFS will likely radicalize the patchwork rebel coalition currently exerting a moderating effect on the jihadists. And while some of the more secular-oriented militant groups are amenable to a negotiated political settlement, JFS and its supporters are not.

Although the Assad regime has shown little interest in negotiating with the rebels, a continued military stalemate of the type recently seen in Aleppo could force its hand. However, now that the overall makeup of the insurgent bloc has been tainted by its association with the more doctrinaire Salafi jihadist ideology, the chances for earnest negotiations between Damascus and the rebels appear to be less likely than at any time since the conflict began in 2011. Accordingly, Turkey's incursion into northern Syria to combat IS, clear its border and prevent further gains by Syrian Kurds is yet another sign that peace talks are more an abstract than a reality.

There is no doubt that JFS is playing the long game. Its new name allows it to portray itself as a vanguard of the Syrian people rather than a stooge of al Qaeda, which has been eclipsed by Islamic State within the global jihadist movement. If a video released by al Qaeda in late August is any indication, al Qaeda leader Ayman al-Zawahiri is concerned about the split even as he nominally gives it his blessing. (The video, titled “Be Not Divided Among Yourselves,” features the Osama bin Laden successor appealing for greater jihadi unity.)

Other hints about the long-term plans of JFS can be seen through the group's extensive social service-oriented da'wa campaigns in Syria, where its charitable actions and provision of public goods aim to simultaneously garner widespread support and recruit new members.

This strategy is strikingly similar to the blueprint used by Hezbollah to expand its organization and secure political legitimacy in southern Lebanon throughout the 1980s and 1990s. Today, more than three decades after Hezbollah suicide attackers killed 241 U.S. service personnel by detonating a truck bomb at a Marine compound in Beirut, the group still maintains its vast arsenal (supplied by Iran) while also holding several politically influential seats in Lebanon's parliament, which is a delicate balance of competing religious and ethnic groups.

To be sure, Hezbollah did not acquire political legitimacy overnight. But the group is a fact of life in Lebanon, a hybrid terrorist organization with political power and the ability to drag Lebanon into a war it did not seek, as happened in July 2006 with Israel.

At present, JFS is actively diversifying its revenue streams in an effort to amass a robust war chest. It still lacks the overt external support (training, weapons, financing) of a nation-state similar to what Hezbollah received from Iran, but the situation is similar in one important respect. Just as Israel proved a unifying force for Lebanon's Shi'ites during the Jewish state's 18-year-long occupation of southern Lebanon, the Assad regime and its Russian and Iranian allies have proved to be a motivating factor in bringing together Syrian rebel groups that might otherwise be fighting each other.

JFS and its ideological sympathizers should never be allowed to entrench themselves in Syria the way Hezbollah did in Lebanon. If this means prolonging the conflict until the jihadists can be separated or isolated from the more moderate elements within Syria's rebel opposition, then so be it.

This commentary originally appeared on Reuters on August 25, 2016. Commentary gives RAND researchers a platform to convey insights based on their professional expertise and often on their peer-reviewed research and analysis.