A Bumpy Road Ahead for China-Taiwan Relations 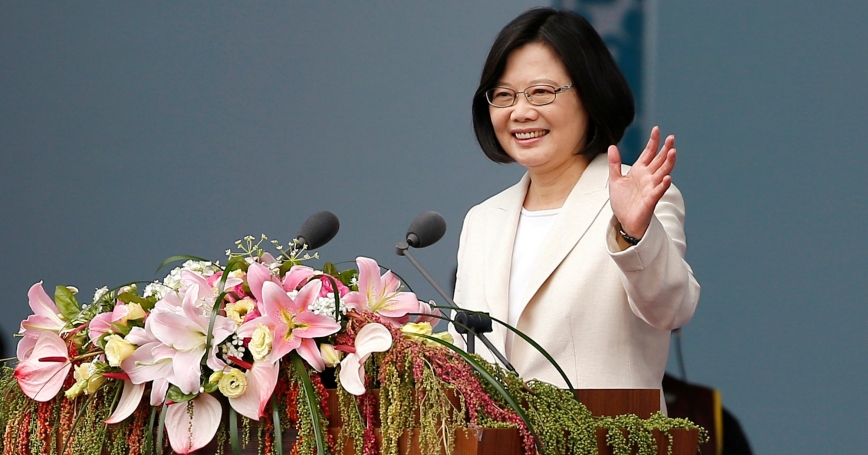 Taiwan's President Tsai Ing-wen waves during her inauguration ceremony in Taipei, Taiwan, May 20, 2016

The inauguration in May of Taiwanese President Tsai Ing-wen represents a critical inflection point for cross-Strait relations. For eight years under Kuomintang (KMT) rule, Taiwan was able to reach accommodation with mainland China, inking 23 economic agreements and even opening political talks, which culminated last Fall in the KMT President Ma Ying-jeou meeting with Chinese President Xi Jinping in Singapore. However, some in Taiwan argued that these achievements were realized at the expense of Taiwan's economic development and sovereignty. Now, with Tsai as president and her Democratic Progressive Party (DPP) holding a majority in the legislature, it would seem that cross-Strait relations have entered a more antagonistic dynamic.

The central issue is the so-called “1992 Consensus”—an acceptance of “one China” reached with Ma and the KMT, but never recognized by Tsai or the DPP. To her credit, Tsai has issued numerous political overtures to Beijing, yet Xi has demonstrated a clear reluctance to accept her as a credible partner. Instead, Xi has turned up the heat on Tsai in an attempt to undermine her administration. This strategy will probably result in periodic and perhaps even sustained tensions that are unlikely to bring Taiwan any closer to Beijing and which may, in fact, only convince Taiwan of the need to increasingly distance itself from China.

From the start of her campaign to become Taiwan's president, Tsai has tried to reconcile her party's traditionally pro-independence position in favor of a more predictable and stable cross-Strait policy predicated on, in her words, “no surprises, no provocations.”[1] Following her election in January, Tsai began the process of making good on her pledge. In an interview with Taiwan's Liberty Times on January 21st, for example, she acknowledged for the first time that the 1992 Consensus was a “historical fact” and represented part of an “existing political foundation.”[2] To be sure, Tsai stopped short of endorsing the substance of the agreement. In an apparent response on March 5th, Xi mandated that Taiwan recognize “the core connotation of the 1992 Consensus” and suggested that Tsai must explicitly accept that “one China” includes both mainland China and Taiwan without differing interpretations.[3] Indeed, Xi may have raised the rhetorical bar even higher for Tsai since her predecessor, Ma, never had to do the same.[4]

During her inauguration speech on May 20th, Tsai once again emphasized that she believed the 1992 Consensus was a historical fact, but again declined to endorse the substance of the agreement.[5] In response, China's Taiwan Affairs Office (TAO) issued a statement condemning the speech, labeling it “an incomplete test paper.”[6] Xi directed the TAO to cut off official ties with its Taiwan interlocutor, the Mainland Affairs Council (MAC), and to cease even semi-official dialogue through China's Association for Relations Across the Strait (ARATS) with Taiwan's Straits Exchange Foundation (SEF).[7] To be sure, in August the TAO stated that communication on previously existing agreements lack of communication will make it particularly difficult for China and Taiwan to implement their economic agreements—despite TAO's recent statement that the agreements would remain in place—and will make the conclusion of any others highly doubtful.[8] Perhaps more alarmingly, Taiwan and China do not have a direct line of communication in the event of a crisis situation.

Xi appears to have embarked on a strategy to discredit Tsai in the hopes that a candidate more favorable to China is elected in 2020.

Without Taiwanese acquiescence to Beijing's demands on the 1992 Consensus, Xi appears to have embarked on a strategy to discredit Tsai in the hopes that a candidate more favorable to China is elected in 2020. One component of this approach has been to launch ad hominem attacks against Tsai herself. In May, for instance, a senior Chinese military official with China's Academy of Military Sciences, who concurrently serves as a member of ARATS, posted an article opining that Tsai was “extreme” and “emotional” because she is unmarried.[9] Although it was quickly taken down and roundly condemned in China, the fact that the article ever appeared in the first place in the International Herald Leader—a newspaper affiliated with state-run Xinhua news—only reinforced Taiwan's perception that China does not maintain a favorable view of Tsai.

More importantly, such personal attacks fit a clearly defined pattern. In the past, Xi's lieutenants have routinely criticized Tsai for being “a splittist” and “true believer” in Taiwan independence, suggesting that she cannot be trusted to negotiate in good faith with China. While there may be differing interpretations of her past policy positions, such as when she rejected the 1992 Consensus during her failed presidential campaign in 2012, Beijing has sidestepped a substantive discussion of Tsai. Instead it has resorted to public taunts, at one point accusing Tsai of “evil talk,” “carping,” and embarrassing herself.[10]

Xi is also pressuring Taiwan by further squeezing its international space. Before Tsai's inauguration, for example, Beijing accepted The Gambia's request to establish formal diplomatic relations with China.[11] To be sure, The Gambia had requested a switch in diplomatic recognition (from Taiwan to the PRC) in 2013, but under a tacit diplomatic truce in effect between China and Taiwan dating back to 2008 under the KMT, Beijing held off on accepting The Gambia's request. In the current context, however, Xi saw greater benefit in sending a political message to Taiwan that it could further restrict its international space at will, and China's establishment of relations with The Gambia could be seen as signaling its willingness to persuade more of Taiwan's 22 remaining diplomatic partners to switch sides.

In a similar vein, Taiwan's invitation to the World Health Assembly (WHA) this year, which it normally attends as an observer under the mutually accepted name “Chinese Taipei,” arrived with new prerequisites for participation. For the first time, Beijing managed to insert language in the invitation on adhering to the “one China” principle. It also dusted off United Nations Security Council Resolution 2758 from 1971—stating that only the People's Republic of China is the “legitimate representative of China”—to reinforce what Beijing sees as Taiwan's proper place in the international forum.[12] Taiwan decided to ignore these caveats and move forward by attending the WHA meeting in Geneva. However, during his address to the WHA, Taiwan's health minister was instructed not to use the term “Taiwan,” resulting in domestic criticism of Tsai's “cross-ministry” coordination of his talking points.[13]

Xi also appears to be consciously reducing the number of tourists China sends to Taiwan. According to one source, Beijing plans to cut tourist numbers from 3.85 million in 2015 down to 2 million in 2016.[14] The obvious intent is to use tourism as an unofficial economic sanction against Taiwan, and the possibility of other like-minded economic punishments—such as the cancellation of trade deals or direct flights to the mainland—could follow.

Finally, Xi has flexed China's military muscle to compel Taiwan to fall in line with Chinese demands. In the runup to Taiwan's elections and presidential inauguration, the People's Liberation Army (PLA) conducted military exercises involving live-fire and island-landing operations. Although official Chinese statements claimed that the exercises were pre-planned and part of the PLA's annual training cycle and not aimed at political events on Taiwan, the timing certainly seems suspicious.[15] In addition, the exercises involved the PLA's 31st Group Army—a military unit based in Fujian Province, opposite Taiwan, that would likely be an essential component of any amphibious landing campaign against the island nation.

Beijing also has more subtle ways of issuing military threats to Taiwan. Last summer, for example, a YouTube video posted online by China Central Television (CCTV) featured PLA soldiers storming a replica of Taiwan's Presidential Office. According to a Shanghai news outlet, it demonstrated how China “would use force to solve the Taiwan issue.”[16] Psychological warfare is just one component of a likely broader Chinese information operations campaign meant to reduce Taiwanese morale.

Barring a breakthrough on the 1992 Consensus, cross-Strait relations are likely to encounter periodic tensions and even perhaps a lasting cold peace that features sustained political tensions with suspended or circumscribed economic ties. According to recent polling research, nearly 74 percent of the Taiwanese public supports Tsai's China policy, so there is no political imperative, as the democratically elected leader of Taiwan, for her to change course any time soon.[17] And while Xi's pressuring strategy has yielded some tactical gains—such as domestic criticism of Tsai during the WHA episode—it is hard to envision how this approach would lead to a more pliable Taiwan.

In fact, the trend seems to be heading the other way. Tsai, for example, has pledged to diversify Taiwan's economy away from dependence on China, and the DPP majority in the legislature recently introduced a “Cross-Strait Agreement Oversight Bill” that would allow legislators to intervene at any time in cross-Strait agreements to halt or reconsider them—an unprecedented power.[18] Another point of tension emerged on July 12th, following The Hague's Permanent Court of Arbitration decision to reject China's sovereignty claims vis-à-vis the Philippines in the South China Sea. Shortly after the decision, the TAO reached out to its MAC counterpart, offering that the two sides “join hands with China in safeguarding the sovereignty of the South China Sea islands and the rights in the surrounding waters.”[19] Tsai's administration promptly rejected the offer, which would have implied that Taiwan's claims were the same as China's because Taiwan is a part of China.[20] Instead, Tsai immediately sent a military ship to patrol the largest island in the Spratly Islands under its de facto control, Itu Aba, otherwise known in Taiwan as Taiping Island.[21] These types of moves suggest less integration and further estrangement in the future.

Derek Grossman is a senior project associate at the nonprofit, nonpartisan RAND Corporation. He previously served at the Defense Intelligence Agency as the daily intelligence briefer to the Assistant Secretary of Defense for Asian and Pacific Security Affairs at the Pentagon and has covered Asia-Pacific security issues for 15 years.

This commentary originally appeared in Defense Dossier on September 22, 2016. Commentary gives RAND researchers a platform to convey insights based on their professional expertise and often on their peer-reviewed research and analysis.