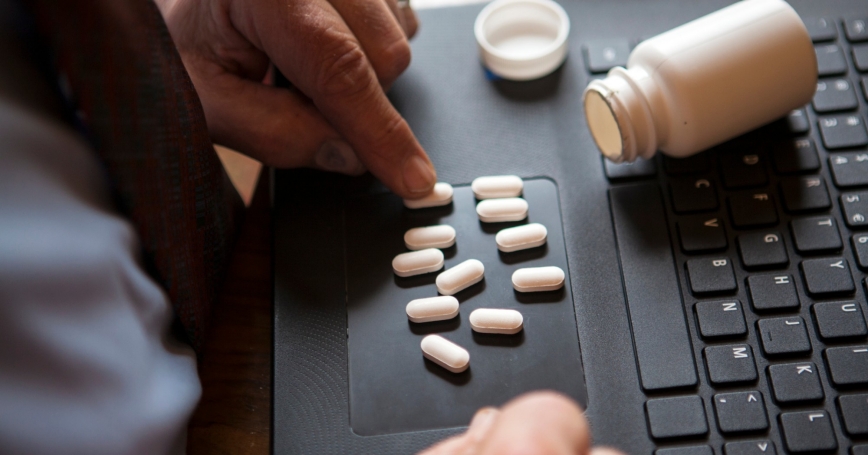 Since Silk Road (the first cryptomarket) was put under the spotlight in 2011, the role these online market places play in global illegal trade has become hotly debated. No scarcity exists of claims, predictions, hypotheses and speculations, with some arguing that this online industry will only become “darker — and bigger.” The UN recognized the dark web in its 2016 World Drug Report as an issue that “raises concerns in terms of the potential to attract new populations of users by facilitating access to drugs in both developed and developing countries.”

It seems clear that certain drug dealers have successfully created business models for the online trade of illicit substances. The German police, for example, seized 320 kilos of drugs when it arrested Shiny Flakes, a 20-year-old cryptomarket drug dealer whose profits were estimated at 1 million euros for the six months prior to his arrest. Cryptomarkets allow drug dealers to tap into additional revenue streams, reducing many of the risks associated with offline markets (e.g. violence) while also introducing new risks (e.g. postal interception, scams).

However, the claim that the online drugs trade is having a substantial impact on global drug markets remains untested. With this in mind, RAND Europe, in collaboration with the Universities of Montreal and Manchester, looked at the role of the Internet, particularly cryptomarkets that exist on the “dark web,” in facilitating the trade of illicit drugs.

By 2016 around 50 cryptomarkets and vendor shops appeared active on the hidden web.

Clearly, these cryptomarkets continue a steady trade. The FBI took down Silk Road in 2013, and its creator was arrested and sentenced to life in prison. But that didn't curb the online drugs trade. Within weeks, Silk Road's place was filled by a copycat, and by 2016 around 50 cryptomarkets and vendor shops appeared active on the hidden web. Our web-scraping and analysis of cryptomarket data from January 2016 suggests that the number of advertisements for illicit drugs on these market places has seen a six-fold increase since September 2013. And the results also show drug transactions have tripled and monthly revenues have doubled.

But how global is this trade? We find that cryptomarkets still tend to be dominated by vendors from the US, the UK, Australia, and a few other countries (see figure below). As vendors tend to indicate where they will be shipping their merchandise from, this information can be used as a proxy for vendor location. Drug vendors operating from the United States have the highest market share of drugs sold on cryptomarkets (35.9 percent of total drug revenues), followed by the UK (16.1 percent) and Australia (10.6 percent). Cryptomarkets offer potential customer outlets for vendors who are closely located to source regions. Our data suggests, however, that very few vendors operate from emerging economies, such as Southern Asia (heroin), Latin America (cannabis, cocaine), northern Africa (cannabis resin), or China (synthetic drugs and new psychoactive substances). 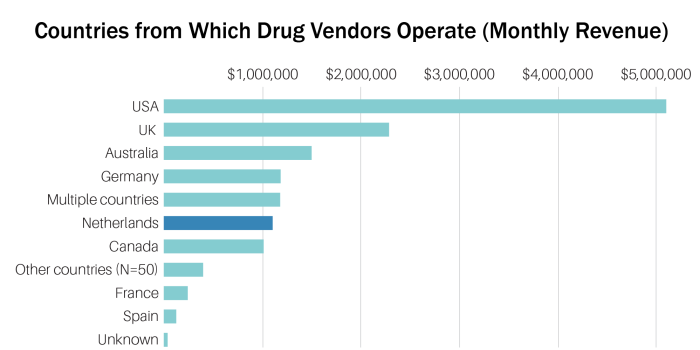 While it is difficult to derive information about buyer locations, sellers usually indicate the countries or continents they are willing to ship their products to. By analyzing these potential shipping routes, we found that North America and Oceania (Australia and New Zealand) were the two most common destinations vendors are willing to ship to. Europe came in third.

The most common routes for drugs were those within North America, Europe, and Oceania. It was difficult to estimate the share of drug shipping routes precisely, as incomplete or unknown routes account for more than one-third of all drug revenues. However, these figures seem to suggest that the majority of drugs bought on cryptomarkets are shipped domestically, or at least intra-continentally, rather than between continents.

This finding is interesting because it challenges the convention that cryptomarkets facilitate the globalization of drug retail markets. Countries such as Australia and the US have implemented strict monitoring of internationally shipped parcels, which explains the reluctance of vendors to ship across international borders. Contrast that to the limited or lack of monitoring of domestically shipped postal packages. With American buyers able to source cannabis, for example, from Colorado and Washington, where the drug has been legalized, why risk purchase from abroad?

The Netherlands seems to be an anomaly when it comes to domestic drug sales. Intelligence from law enforcement suggests that domestic drugs sales from Dutch vendors are relatively small. This may be linked to the country's small population, but it could also be a result of the crucial role the country plays in the European drug markets. The Netherlands is the main producer of MDMA, ecstasy, and herbal cannabis and a key distribution hub for cannabis resin and cocaine in Europe.

The 225 vendors operating from the Netherlands generated $1.1 million in drug revenues per month and ranked fifth, after the US, UK, Australia, and Germany. Dutch vendors have by far the largest revenues per capita and this figure could be underestimated. Interviewees and qualitative analyses of the products listed for sale suggest that Dutch vendors were traveling to neighboring countries to ship illicit drugs from cryptomarkets in attempts to evade the stringent monitoring of postal packages from the Netherlands.

Dutch vendors dominated global sales of MDMA and ecstasy on cryptomarkets with 23 percent of overall revenues for these substances.

Dutch vendors dominated global sales of MDMA and ecstasy on cryptomarkets with 23 percent of overall revenues for these substances. Three quarters of all Dutch revenues from illicit drugs sold on cryptomarkets were from two drug categories — ecstasy-type drugs and stimulants. This specialization likely reflects the Netherlands' role in the production of these drug types, making vendor access to these substances relatively easy and also profitable given its location in the supply chain. As prices for MDMA and ecstasy in countries like Australia are considerably higher than in the Netherlands — sometimes even tenfold — overseas transactions for these substances may be worth the risk of interception.

Such differences do not exist for cannabis, which is also produced locally in Australia and the US. This may explain why Dutch vendors only had a 2 percent share of global cannabis revenues. The specialization also reflects the interconnection of physical and virtual drug distribution channels. Dutch vendors appear to be sourcing their drugs locally since their online activities are similar to those of offline drug dealers.

The full impact of the “dark web” on the illicit drugs trade remains inconclusive. But being able to web-scrape and analyze data from cryptomarkets has tremendously improved understanding of these markets. Vendors in the Netherlands appear to be developing a fairly successful international trade of ecstasy-type drugs and stimulants from cryptomarkets, but it appears that most countries are selling illicit drugs within domestic borders. In essence, cryptomarkets have grown at a fairly decent rate since 2013, but their global impact could be overstated — for now.

Stijn Hoorens is an associate director at RAND Europe, and David Décary-Hétu is an assistant professor at the School of Criminology at the University of Montreal. They are co-authors of the study Internet-facilitated drugs trade: An analysis of the size, scope and the role of the Netherlands.

This commentary originally appeared on VentureBeat on September 17, 2016. Commentary gives RAND researchers a platform to convey insights based on their professional expertise and often on their peer-reviewed research and analysis.