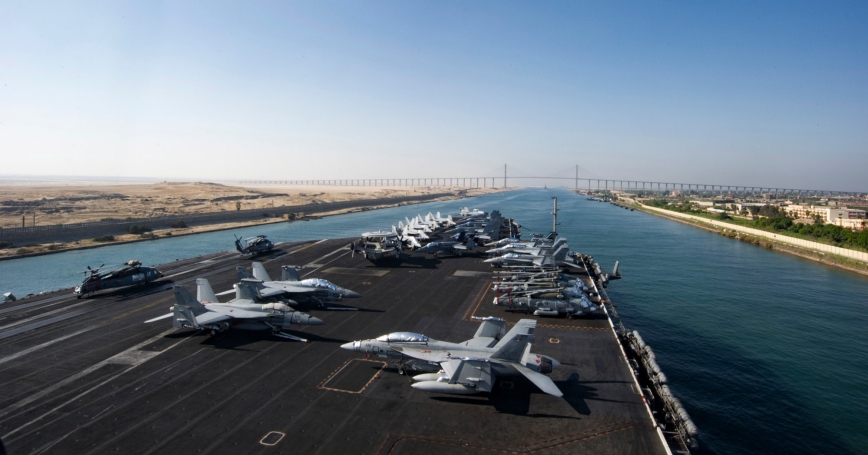 by Scott Savitz and Paul DeLuca

The Suez Canal has been a lifeline for global commerce and for military power-projection since its inauguration in 1869. For nearly a century, it was the Royal Navy's vital link to most of the British Empire. Today, it remains a critical enabler of U.S. naval power, increasing the on-station time of American warships and their responsiveness to emerging crises.

Over the last several decades, U.S. Navy use of the canal has become a matter of routine, uninterrupted by occasional turmoil in Egypt and wider regional conflagrations. But increasing instability in the Sinai could threaten this routine, a possibility the Navy should recognize and prepare for.

Ships transiting from the East Coast to the Strait of Hormuz save over 3,000 nautical miles relative to voyaging around Africa, or about eight days in transit. In a round-trip 180-day deployment, a ship can save 16 transit days, increasing its on-station time while saving fuel. By transiting the Mediterranean, a ship can achieve presence near other key “hot spots” and provide the crew with morale-boosting visits to European ports.

Moreover, the Suez Canal facilitates the rapid movement of ships between the European and Central Commands. The ability to readily shift ships between the Mediterranean and Red Sea provides commanders with operational flexibility at a time of sprawling regional threats in Libya, Ukraine, Syria, Iraq, Yemen, and Iran. At present, a ship addressing a situation off Libya can reach the Strait of Hormuz in 4,000 nautical miles, enabling it to expeditiously respond to an emergent crisis. If that ship were unable to use the Suez Canal, it would have to transit nearly 12,000 nautical miles around the entire African landmass.

Unfortunately, the U.S. Navy's continued use of this lifeline is increasingly menaced by growing disorder in the Sinai, on the eastern flank of the canal. Sinai-based militants linked to the Islamic State launched nearly 400 attacks against military and civilian targets in 2015, killing nearly 300 people, both dramatic increases over prior years. While over 3,000 of those militants were killed in turn, and nearly 4,000 arrested, the violence does not appear to be abating. In recent years, attacks on a busload of South Korean tourists, and an aircraft full of Russian ones, have indicated the militants' anti-foreign intent...

This commentary originally appeared on The National Interest on September 13, 2016. Commentary gives RAND researchers a platform to convey insights based on their professional expertise and often on their peer-reviewed research and analysis.