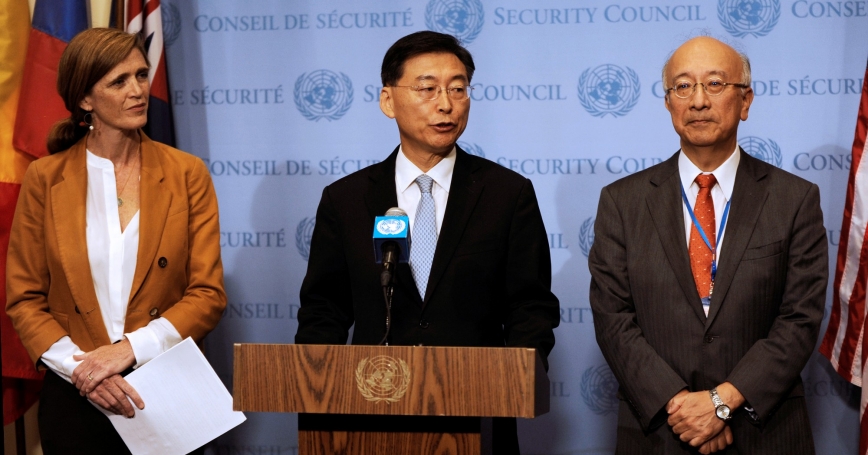 China has been a major proponent of regional security for Northeast Asia. This advocacy is only natural: Truly great powers should pursue more than just their own security.

Many had hoped that the Chinese definition of regional security would include Republic of Korea (ROK) security. After all, the ROK is part of the Northeast Asia region and has been heavily threatened on a regular basis by North Korea. Thus many ROK security experts believed that in the aftermath of six summit meetings through 2015 between ROK President Park Geun-hye and Chinese President Xi Jinping, China was committed to stopping North Korean provocations and China was also committed to meeting Chinese international security obligations.

Sadly, China seriously disappointed many in the ROK security community this year. And China has done so not just once, but on multiple occasions.

In January, North Korea conducted its fourth nuclear weapon test, a serious violation of multiple U.N. Security Council Resolutions. Admittedly, the failure to deter North Korea's nuclear weapon test fell on a combination of China, Russia, the United States, the ROK, and Japan. But after such a deterrence failure, what happens next can determine the degree to which deterrence will be effective moving forward.

To deter further North Korean nuclear weapon or missile tests, the regional countries needed to demonstrate that North Korea would pay a cost for its fourth nuclear weapon test that would outweigh any benefits it may have gained. This cost versus benefits trade-off is the essence of deterrence.

China's refusal to impose sanctions by early February meant that North Korea had suffered little in the way of costs for its fourth nuclear test.

While China denounced this January provocation, it refused to take any action against North Korea. The international community has focused on economic sanctions to impose costs on North Korea, but to impose significant costs on the North, China must support such sanctions because China is North Korea's biggest trade partner by far. China's refusal to impose sanctions by early February meant that North Korea had suffered little in the way of costs for its fourth nuclear test. China's inaction apparently made a major contribution to North Korea's conclusion that it could get away with the satellite launch/ICBM test it executed on Feb. 7.

Thereafter, China did support U.N. Security Council Resolution 2270, which imposed serious trade sanctions on North Korea. But China does not appear to be fully following those sanctions: Trade between China and North Korea reportedly increased about nine percent year-on-year this June.

On July 7, the ROK and the U.S. announced a decision to deploy the THAAD missile defense system in the ROK to deal with the ever-growing North Korean missile and nuclear weapon threats. This year alone, North Korea has tested 19 ballistic missiles of Scud range or greater, more than in any previous year.

Yet China appears disinterested in ROK security against these North Korean threats. From well before the July announcement, China opposed the THAAD deployment. For example, in February China's Foreign Minister, Wang Yi said China's national security interests could be “jeopardized or threatened” by THAAD since its “X-band radar” system “has a radius that goes far beyond the Korean peninsula and reaches into the interior of China. … We believe that China's legitimate security concerns must be taken into account and a convincing explanation must be provided to China,” he said.

In the regional security context, such Chinese concerns are a little difficult to understand. After all, China does not similarly complain about the U.S. X-band radars deployed in Japan or U.S. satellite based observations of China.

Even more curious, China deploys a missile defense system referred to as the HQ-19 that has many similarities to the THAAD system. Reportedly, China has developed this system in cooperation with Russia, suggesting that it is not intended to intercept Russian theater ballistic missiles. Other than Russia, North Korea has by far the most ballistic missiles that could endanger China. And while China is supposed to be an ally of North Korea, Chinese and North Korean forces never plan together or train together. In fact, the Chinese and North Korean leaders really don't like each other — North Korea regularly defies Chinese direction, raising questions about whether China really is a great power when it cannot influence even impoverished North Korea.

Indeed, in 1993 during the first nuclear crisis with North Korea, former North Korean leader Kim Il-sung called together his senior military personnel and reportedly asked them what North Korea should do if it had to fight the United States over the North's nuclear program and lost that war. His son, Kim Jong-il, the father of the current North Korean leader, replied, “I will be sure to destroy the earth! What good is this earth without North Korea?” Chinese leaders know that China is part of the Earth.

North Korean NoDong missiles apparently can reach any target in Japan, and thus the longer range Musudan missile, which cannot reach the U.S., is assumed to be a threat primarily against Guam. But North Korea does not need 50 to 100 Musudan missiles to attack Guam. Interestingly, 12 of the 20 largest Chinese cities appear to be within range of North Korean NoDong missiles, and the remaining 8 are within Musudan range. So it's no surprise that China deploys the HQ-19 missile defense system.

China has not sought ROK permission to deploy the HQ-19, so how can China reasonably suggest that the ROK needs China's approval to deploy THAAD? When China says that it is concerned about regional security, does it really mean that it is only concerned about Chinese security?

Even then, China does not seem to understand the regional implications of the THAAD missile defense system. One fully-deployed THAAD battery is capable of destroying perhaps 50 North Korean ballistic missiles. North Korean planners, recognizing the THAAD capabilities, would need to shift missiles away from targeting China to rebalance its attacks once THAAD is deployed in Korea. Thus THAAD would likely reduce the number of North Korean ballistic missiles targeted on China, a significant improvement in Chinese and regional security.

If Chinese opposition to THAAD makes little sense in a regional security context, why would China be making such a major issue of THAAD? Perhaps it hopes to divert attention from its refusal to abide by international law in the South China Sea. Or it might be interested in establishing a precedent of great influence on ROK national security decisions.

Regardless, THAAD offers the ROK important protection against the North Korean missile and nuclear weapon threat. Of the 50 North Korean ballistic missiles that THAAD could destroy, if only five carried nuclear weapons aimed at ROK cities, THAAD could potentially save the lives of half a million or more ROK citizens. How can anyone say that such an outcome would not enhance regional security?

This commentary originally appeared on The Korea Times on September 21, 2016. Commentary gives RAND researchers a platform to convey insights based on their professional expertise and often on their peer-reviewed research and analysis.