Russian Propaganda Is Pervasive, and America Is Behind the Power Curve in Countering It 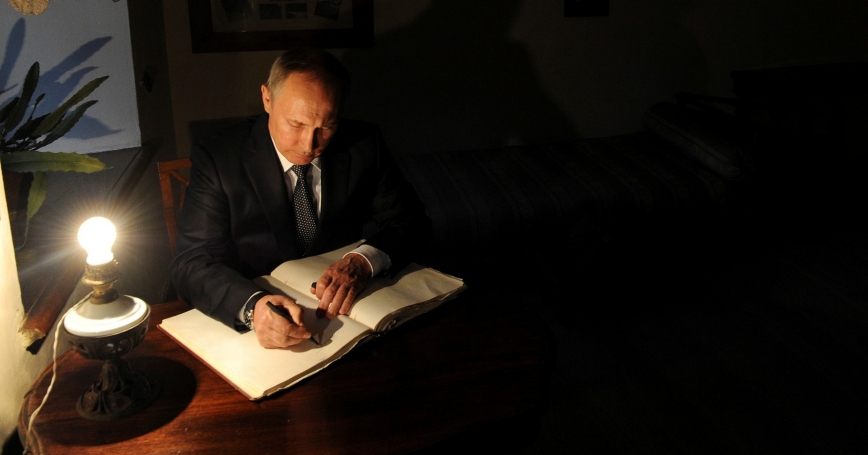 Photo by Sputnik/Kremlin/Mikhail Klimentyev via Reuters

by Christopher Paul and William Courtney

As Washington investigates alleged Russian hacking of U.S. political systems, Russian propagandists are also at work across a wide front, aiming a firehose of falsehoods at ill-informed audiences, foreign and domestic. A recent RAND study reveals how this disinformation — intentionally false — leverages psychological vulnerabilities to sway audiences. U.S. leaders should raise public consciousness about its nature and dangers.

In January 1981, days after his inauguration, President Ronald Reagan showed the way. Soviet leaders, he said, “reserve unto themselves the right to commit any crime, to lie, to cheat” in order to further their cause. His words gained worldwide notice. They were effective, because they meshed with other evidence in the public mind of Soviet wrongdoing, such as the invasion of Afghanistan in 1979 and heightened nuclear missile threats in Europe. An egregious example of Soviet disinformation from the 1980s was the claim that the HIV/AIDS epidemic emerged from U.S. biological weapons research (PDF).

The explosion of new media is a boon for propagandists.

The explosion of new media is a boon for propagandists. RT, formerly Russia Today, spends over $300 million per year purveying a toxic mixture of entertainment, real news and disinformation across cable, satellite and online media. Dozens of Kremlin-backed proxy news sites blast propaganda while hiding or downplaying their affiliation. Russian trolls and hackers manipulate thousands of fake accounts on Twitter, Facebook and other social media. This volume and multiplicity of media and modes has an effect; research in psychology shows that multiple sources are more persuasive than a single source.

Russia's approach to propaganda emphasizes creating first impressions, which tend to be resilient, and then reinforcing them through repetition. In this way Kremlin propagandists have persuaded some of the less informed that Ukraine's post-Maidan government is fascist. Contrary to credible findings of pervasive state-sponsored Russian doping at the 2014 Winter Olympics in Sochi, Moscow's early and repeated denials have confused some audiences.

While some Russian propaganda stories build around a kernel of truth, others are wholly manufactured and spun. In 2014 propagandists fabricated social media reports to spur panic about a nonexistent chemical plume in Louisiana. Even after German police uncovered the falsehood of claims that a 13-year-old Russian-speaking girl in Cologne was gang-raped by immigrants last January, Moscow kept warning about it. Why might a drumbeat of falsehoods succeed? People are often poor judges of the credibility of both information and its sources, psychology research has found, and over time familiar messages or those previously identified as false can become more persuasive.

Russian propaganda does not shy away from making inconsistent claims; its goal is to see which gain acceptance with various audiences. When in July 2014 Malaysia Airlines Flight 17 was shot down over eastern Ukraine, various Russian sources claimed: A Ukrainian jet fighter was responsible, Ukrainian ground forces were trying to down an aircraft carrying Putin and Ukrainian air traffic control forced MH-17 to fly over a war zone. But the propagandists were clumsy. Just after the crash, ITAR-TASS reported that a “Ukrainian Air Force An-26 transport plane” had been downed by a missile. A few weeks earlier Russian-backed rebels bragged of acquiring a Russian Buk anti-aircraft missile system, the weapon that Dutch investigators found had brought down the airliner.

Regrettably, some audiences are not turned off by inconsistent or implausible expectations. Even if they recognize the falsehood of much of the content in the Russian firehose — such as from television — they may be skeptical of contrary information from similar media even if sources are credible. Polls last year found that about half of Russians believed they received “objective information” from television, their main source of news.

U.S. leaders should raise public consciousness, helping to forewarn audiences about the threat of Russian propaganda.

America is behind the power curve in countering Russian disinformation. U.S. leaders should raise public consciousness, as Reagan did, helping to forewarn audiences about the threat. After-the-fact refutations of falsehoods rarely win more attention than retractions buried in newspapers. As with human rights and religious freedom abuses, the Department of State could issue annual public reports on foreign government use of dishonest propaganda, naming and shaming outlets such as RT and Sputnik. The department could also fund independent organizations that raise awareness. A noteworthy one is stopfake.org, a community that checks facts and refutes disinformation about events in Ukraine.

U.S. public diplomacy is under-performing. In 2013 then-Secretary of State Hillary Clinton told Congress that the Broadcasting Board of Governors — which oversees the Voice of America, and Radio Free Europe/Radio Liberty and other surrogate media — is “practically defunct.” Reforms in a bipartisan congressional bill could improve their operation.

The once illustrious RFE/RL research function, gutted after the Cold War ended, could be revived. The Center for European Policy Analysis, Jamestown Foundation and scholar Paul Goble carry out some of this valuable work on shoestring budgets. This work illuminates cultural contexts and media environments in places where America has strategic interests.

The Department of State could elevate public diplomacy and more tightly weave it into American foreign policy, not spin it off by reviving the former U.S. Information Agency. No career foreign affairs professional has served as under secretary of state for public affairs and public diplomacy — a signal in Washington that it lacks top priority. The department's talented public diplomacy cadre ought to be better nurtured.

Russian disinformation is a global threat, much of it targeted against democracies.

Because Russian disinformation is a global threat, much of it targeted against democracies, the U.S. government should step up collaboration with other like-minded governments to counter the onslaught. U.S. concerns gain credence and reinforcement when others express them.

The Kremlin's obsession with propaganda and disinformation persists even though it weakens Russia's attractiveness as a foreign policy and economic partner. America should seek to expose these nefarious methods and increase public resilience to their siren song, even as Washington pursues cooperation with Moscow on Syria and other issues. It is not enough to try to counter a firehose of falsehood with a squirt gun of truth.

Christopher Paul is a senior social scientist at the nonprofit, nonpartisan RAND Corporation, a professor at the Pardee RAND Graduate School, and a member of the adjunct faculty of the Center for Economic Development, Heinz College, Carnegie Mellon University. William Courtney is an adjunct senior fellow at RAND and former U.S. ambassador to Kazakhstan and Georgia. He advised on the integration in 1999 of USIA into the Department of State.

This commentary originally appeared on U.S. News & World Report on September 9, 2016. Commentary gives RAND researchers a platform to convey insights based on their professional expertise and often on their peer-reviewed research and analysis.