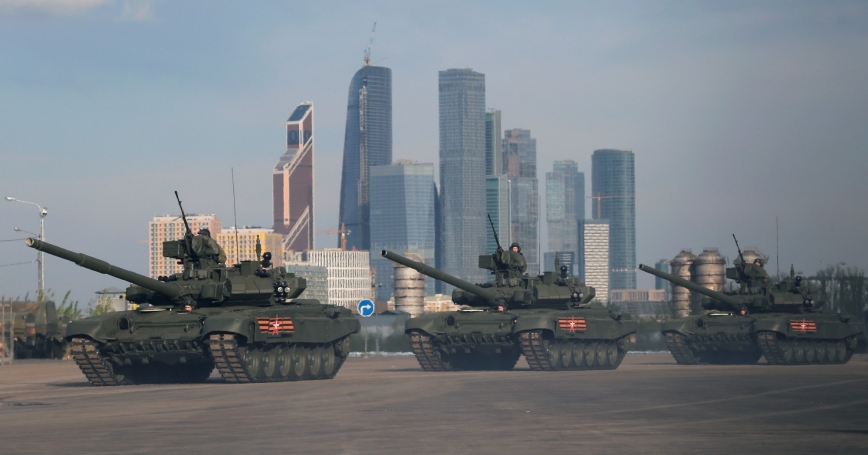 Russian servicemen on Russian T-90A main battle tanks before a rehearsal for the Victory Day parade, with the Moscow International Business Center also known as Moskva-City in the background, May 5, 2016

The Russian economy has been in recession for nearly two years now, with GDP growth shrinking by 3.7 percent in 2015. However, as the recession continues and persistent low oil prices cut government revenues to the bone, military spending has remained almost immune to cuts, and the country has undertaken expensive foreign military interventions in Ukraine and Syria. The Cipher Brief asks Christopher Chivvis, associate director of the RAND Corporation's International Security and Defense Policy Center, to explain this behavior.

The Russian economy has been in recession for over 18 months now. Could you begin by laying out the sources of this downturn, and the effect it has had on the Russian budget, and the effect on ordinary Russians?

The Russian economy faces a triple whammy among Ukraine sanctions, low oil prices, and an overall poor business climate. These challenges compound one another, and capital flight continues (although at lower levels than in 2014, when it reached a record $153 billion). Meanwhile, a declining ruble has created inflation that cuts into the buying power of ordinary Russians, and unless oil prices rise substantially, the Russian state will face a larger and larger budget deficit. Overall, over 80 percent of Russians are suffering the consequences of the country's recent economic turmoil, according to a recently released poll by the Levada Center. A consequence is that many middle-class Russians with economic means are seeking to emigrate overseas. This loss of know-how doesn't bode well for Russia's economic future, creating an additional problem for the Kremlin. Economic growth may return in 2017, but absent a major shift in Kremlin policy, that growth will remain uncertain.

Despite economic distress, military spending has been rising steadily at an almost inverse relationship to GDP. Can you explain why this is the case and what priorities drive this phenomenon?

The Russian military has been spared belt-tightening measures that might normally be expected in the face of such economic difficulty in spite of the financial costs of military operations in Ukraine and Syria. This suggests top-level Russian leaders, including President Vladimir Putin, are deeply committed to the military reform and modernization program they embarked on in 2008 after the Russia-Georgia war. That program is central to President Putin's aim of building a military capable of projecting power rapidly and effectively along Russia's borders, while at the same time deterring foreign intervention against the regime. Putin would like to be able to carry out interventions to support his political and economic interests in countries neighboring Russia, but without concern for the consequences for Russia's relations with Europe or America.

Presumably, this concentration on military spending is related to wars in Ukraine and Syria, as well as balancing against NATO. Can you explain what value the Putin government gets out of spending on these priorities rather than focusing on economic reform or stimulus?

For Putin and those close to him, military modernization plans are linked to the Kremlin's authority. The ability to conduct interventions on Russia's borders is important from their perspective, especially if such operations can be done without fear that they will result in external efforts to end the Putin regime. Putin's close circle likely also benefits personally from military spending through links to the major Russian arms producers. Insofar as military reforms seek to “balance” NATO, they do so in a purely negative way—by attempting to ensure that Russia can credibly threaten Europe with military strikes so as to gain leverage in a crisis situation.

What is the relationship between foreign policy and domestic economic priorities in Russia? In your mind, does foreign policy consistently receive a higher priority for Russian leaders? Why?

It's not clear that foreign policy does receive a higher priority than domestic policy, although from the outside, it is easy to see why it might appear that way. Russia's leaders aim to stay in power and likely would prefer to do so by manipulating elections and with strong economic growth. These strategies worked well for President Putin in his first decade in power. More recently, however, declining economic growth has naturally led to protest against the regime—including in the form of the flight of many in the middle class. Absent opportunities to strengthen the economy through further economic integration with the outside world, Moscow's leaders can either further crack down on domestic freedoms to respond to that pressure or attempt to distract attention through foreign adventures. So far, the regime appears to have chosen the latter strategy. This is not to say that domestic factors alone can explain Russia's interventions in Syria or Ukraine, but they do likely play a role in this way.

Going forward, what does this tell countries like the United States about dealing with the Russian state?

The United States and Europe imposed economic and financial sanctions on Russia in 2014, first for its annexation of Crimea and then after Russian-backed rebels shot down flight MH-17, killing 283 passengers. These sanctions, from the Western perspective, do cut both ways—although more against Russia than the West. On the one hand, sanctions were necessary in the aftermath of Russia's clear violation of international law in Ukraine in 2014 and given that few leaders in the United States and Europe were willing to use military force to exact a price for Russia's bald-faced aggression. On the other hand, insofar as they tend to increase the domestic pressure on the Kremlin, they may indirectly intensify its tendency to seek conflict with Europe and America.

Sanctions also have the downside of being difficult to repeat. Over time, economic sanctions could reduce leverage over Russia if they result in dwindling economic and other contact. That said, as long as political will for military measures to contain and deter Russian aggression—for example, by providing lethal assistance to Ukraine—remains limited, sustaining sanctions against Russia remains the only option to deal with a Russia that is determined to revise the post-Cold War political and economic settlement in Europe in its favor.