The Crucial South China Sea Ruling No One Is Talking About 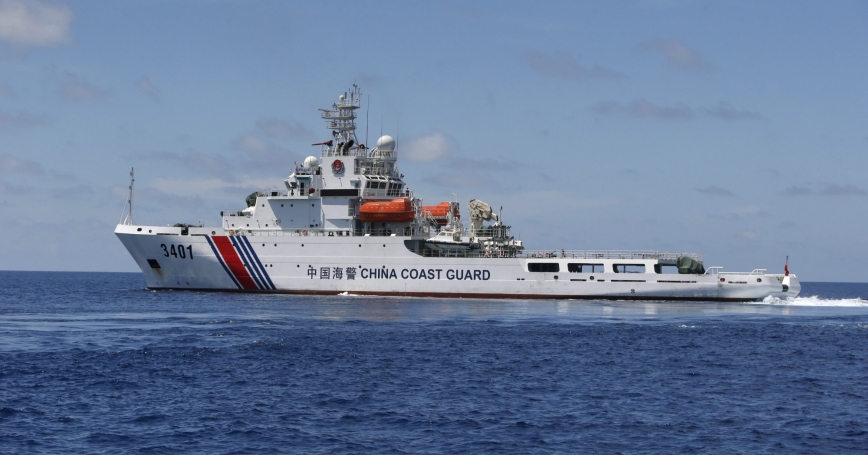 A Chinese Coast Guard vessel is pictured on the disputed Second Thomas Shoal, part of the Spratly Islands, in the South China Sea, March 29, 2014

Amid the significant media buzz and scrutiny over the arbitral tribunal's July ruling (PDF) before the Permanent Court of Arbitration (PCA) regarding disputed maritime rights in the South China Sea, which sided with the Philippines on most counts and resulted in a major legal and diplomatic defeat for China, an important but less conspicuous ruling within the PCA award document on Chinese coast guard behavior was largely overlooked by the press. The ruling, entitled “Operation of Law Enforcement Vessels in a Dangerous Manner,” sought to assess whether or not China, by the actions of its maritime law enforcement (MLE) vessels, had breached its obligations under the United Nations Law of the Sea Convention (UNCLOS (PDF)) by operating “in a dangerous manner causing serious risk of collision to Philippine vessels navigating in the vicinity of Scarborough Shoal,” otherwise known as the Philippines' Submission No. 13.

In one of the most sweeping rulings on the actions of maritime law enforcement in disputed waters on legal record, the tribunal found that China's coast guard had breached several UNCLOS articles governing safety and navigation at sea.

The court examined two incidents reported by Philippines officials as dangerous actions conducted by Chinese law enforcement vessels near Scarborough Shoal. The first incident occurred between a Chinese Fisheries Law Enforcement Command (FLEC) vessel and a Philippines Coast Guard (PCG) ship on April 28, 2012; the second between Philippines Bureau of Fisheries and Aquatic Resources and PCG vessels and Chinese FLEC and China Marine Surveillance (CMS) vessels on May 26, 2012. In both cases, the Philippines side claimed that near collisions occurred with Philippines MLE vessels due to intentionally dangerous or unprofessional maneuvers performed by Chinese MLE vessels that put Philippine lives and property at risk.

The first threshold the court sought to overcome was whether it had jurisdiction to rule on the Philippines' Submission No. 13. In its October 29, 2015 Award on Jurisdiction and Admissibility, the court ruled that Submission No. 13 fell under Articles 21, 24, and 94 of UNCLOS, and therefore it had jurisdiction to rule on the merits of the submission. In particular, there were three thresholds the court had to consider in order to decide whether it had jurisdiction over the submission. First, the tribunal found that the submission “did not concern sovereignty or maritime delimitation.” Second, the court determined that Article 298(1)(b) of the Convention, which excludes “certain disputes concerning law enforcement activities from the procedures, was inapplicable because that exception applies only in the context of the exclusive economic zone.” The present dispute, the court found, “relates principally to events that occurred in the territorial sea of Scarborough Shoal.” Finally, the court considered its jurisdiction was “not dependent on a prior determination of sovereignty over Scarborough Shoal.”

In rendering its judgment on whether Chinese actions broke international conventions regulating safe maneuvers at sea, the court relied upon the guidelines under the Convention on International Regulations for Preventing Collisions at Sea, 1972, or COLREGS, of which both China and the Philippines are members, as the one of the “generally accepted international regulations” to which flag States are required to conform regarding rules of navigation, avoidance of accidents at sea, and good seamanship. The court found that COLREGS represented the most appropriate convention for application of Article 94 of UNCLOS. The court also relied upon two independent expert examinations of the merits of the Philippine claims – one conducted by retired United States Coast Guard officer and current Professor of Law at the University of Washington, Craig H. Allen (known as the Allen Report); and another by Captain Gurpreet S. Singhota, an official of the International Maritime Organization's Maritime Safety Division, who was appointed by the court in accordance with the “Rules of Procedure” section of Article 24 in order to obtain an independent expert assessment of the Philippines claims – to guide and inform the court's judgment on the case.

In unambiguous terms, the tribunal found that Chinese actions had violated rules 2, 6, 7, 8, 15, and 16 of the COLREGS, thus breaching Article 94 of UNCLOS. The tribunal concluded that Chinese vessels in both instances failed to respect fundamental rules of COLREGS; namely, that vessels have a responsibility to operate at speeds and undertake maneuvers in such a manner as to avoid risk of collision, accidents at sea, and not imperil the life or property of other seafarers when operating in close proximity.

First, the court found that Chinese MLE vessels violated Rule 2 of COLREGS, concluding that Chinese conduct was “irreconcilable with an obligation of responsible navigation.” In this regard, the court accepted Captain Singhota's characterization of the Chinese vessels' conduct being in “total disregard of good seamanship and neglect of any precaution.” Further, when considering an exception within Rule 2(b) in COLREGS that permits departure from the COLREGS “where necessary to avoid immediate danger,” the court finds no evidence for such an exemption. In fact, the court found,

If anything, the record suggests that the Chinese maneuvers themselves created an immediate danger, rather than having been undertaken in response to a pre-existing threat. Additionally, while the Tribunal is aware that China's statements suggest that its actions were justified as part of general law enforcement activities in the vicinity of a feature which China considers to comprise part of its sovereign territory, the Tribunal also recognizes that, where the operational requirements of law enforcement ships stand in tension with the COLREGS, the latter must prevail.

The court also sided with the Philippines' claim that China violated Rule 6 of COLREGS, which requires vessels to undertake measures to avoid collision where possible by operating at safe speeds at sea. While noting that COLREGS does not define what constitutes “safe speed,” the court issued the following ruling:

In this instance, however, both Professor Allen and Captain Singhota consider the incidents described above to have occurred at unsafe speeds. The Tribunal concurs with that view and determines that the Chinese vessels' actions breached Rule 6.

Regarding rules 7 and 8 of COLREGS, which concerns first identifying whether a risk of collision is present, and, if so, the appropriate measures for mariners to take to avoid a collision at sea from occurring, the court found:

Indeed, far from avoiding a collision, the actions of the Chinese ships made the possibility of a collision substantially more likely. That fact alone—independent of any question as to whether a collision, whether through the crew's effort or by good fortune, was ultimately averted—suffices to demonstrate a violation of the COLREGS. For the same reasons as those underlying its conclusion with respect to Rule 2(a), the Tribunal considers the other requirement imposed by Rule 8, namely “due regard to the observance of good seamanship,” also to have been violated.

Finally, the tribunal found China to have breached Rules 15 and 16 of COLREGS relating to right-of-way for ships at sea. Rule 15 states that when two vessels are crossing so as to involve a risk of collision, the vessel “which has the other on her own starboard side shall keep out of the way and shall, if the circumstances of the case admit, avoid crossing ahead of the other vessel.” Rule 16 requires that “every vessel which is directed… to keep out of the way of another vessel shall, so far as possible, take early and substantial action to keep well clear.”

The court found that Chinese MLE vessels violated both rules in both instances under consideration, ruling:

On April 28, 2012, FLEC 310 approached BRP Pampanga to within 600 yards; fifteen minutes later, it passed BRP Edsa II from the starboard quarter to the port side at a distance of “barely 200 yards.” In other words, rather than abiding by the applicable regulations by “keep[ing] out of the way” and avoiding the other ship, FLEC 310 did the opposite. The attempt by CMS 71, on 26 May 2012, to cut across the bow of MCS 3008 from the port (left) side at a distance of merely 100 yards admits of the same error. Accordingly, both incidents constituted a breach of the Rules of the COLREGS in this respect.

The court summarized its findings of Chinese violations by issuing the following damning indictment of Chinese MLE behavior towards the Philippines:

In light of the foregoing analysis, the Tribunal considers China to have repeatedly violated the Rules of the COLREGS over the course of the interactions described by the crew of the Philippine vessels and as credibly assessed in the two expert reports. Where Chinese vessels were under an obligation to yield, they persisted; where the regulations called for a safe distance, they infringed it. The actions are not suggestive of occasional negligence in failing to adhere to the COLREGS, but rather point to a conscious disregard of what the regulations require.

Why the Ruling Matters

The court's sweeping condemnation of Chinese MLE behavior is important for several reasons. First, the court struck down the Chinese argument that its actions were simply a defensive measure undertaken in response to a perceived threat by Filipino MLE actions. Rather, the court found that the Chinese maneuvers themselves created an immediate danger and demonstrated a serious and intentional breach of fundamental rules under COLREGS that ships take precautions for safe transit at sea.

Second, the court's ruling thrust into the spotlight the crucial but underappreciated value of COLREGS as a convention governing basic responsibilities of navigation and safety at sea. By employing the rules of COLREGS as a key maritime convention with applicability to the broader principles within UNCLOS, namely Article 94, the tribunal offered important thresholds of MLE violations and a legal precedence upon which analysts and international maritime legal prosecutors alike can rely upon in future cases of coercion by MLE actors at sea.

Finally, China's decision to deploy its coast guard as a coercive arm of its state policy to consolidate and protect its maritime interests in the South China Sea has been a cause for concern in the region. China's policy of “might makes right” and numerical superiority of coast guard vessels ensures continued dominance and bullying tactics towards smaller claimants in the South China Sea. While China can easily write off the PCA ruling on its coast guard behavior as just another “piece of paper” it can ignore, the hope is that this and future rulings will over time build a legal case that abiding by basic maritime principles of safety at sea is in the interest of all countries, including China.

This commentary originally appeared on The Diplomat on September 9, 2016. Commentary gives RAND researchers a platform to convey insights based on their professional expertise and often on their peer-reviewed research and analysis.