The Precarious State of Syrian Refugee Women, Children in Lebanon 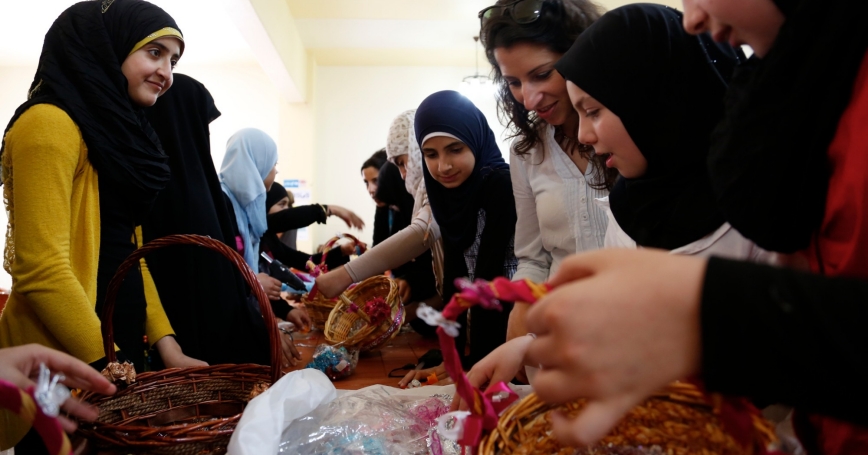 While the gendered impact of political conflict on women and children has been well-documented in conflicts in Bosnia, Rwanda, the Democratic Republic of Congo, Iraq, and Palestine, much less is known about the effect the Syrian civil war is having on women and children displaced by the conflict. More than 13 million Syrians (PDF) in Syria and surrounding countries have been displaced by the conflict since March 2011, creating what some have called the worst refugee crisis in a generation. More than 1 million displaced Syrians have sought refuge in Lebanon, accounting for almost a quarter of the neighboring nation's population of about 4.8 million. Syrians in Lebanon have become the largest refugee population in the world.

In Lebanon, more than half of registered Syrian refugees are younger than 18, and 75 percent are women and children. The absence of adult males in households has increased the vulnerability of women and children, who are at heightened risk for sexual and gender-based violence (PDF) as well as child labor, and other illicit activities.

Research has shown that women living in conflict areas or humanitarian settings are predisposed to poor reproductive health outcomes. A 2014 study that assessed the reproductive and general health of Syrian women in Lebanon found 30 percent of female respondents reported experiencing some form of violence—but of that group, 65 percent did not seek medical care. The plight of women and girls in Lebanon also may worsen due to their loss of legal protection, according to a recent Human Rights Watch report.

New legislation by the Lebanese government has suspended registration of new Syrian refugees. This has made unregistered Syrian women and children vulnerable to labor and sexual exploitation because they cannot go to Lebanese authorities to seek protection. Moreover, the United Nations is concerned about the number of Syrian children facing statelessness—reports suggest that the births of as many as 50,000 Syrian children remain unregistered in Lebanon.

ABADD-Resource Center for Gender Equality—a non-governmental, civil society organization that works to achieve gender equality in the Middle East and North African region—has been at the forefront in responding to the needs of Syrian communities in Lebanon affected by gender-based violence. In collaboration with the International Rescue Committee, a nonprofit humanitarian group, ABADD conducted a rapid assessment of the risks and violence faced by Syrian refugee women and girls in Lebanon. The group's findings underscored the dangers that the women and girls identified as most imminent, including rape, sexual harassment, domestic violence, and early child marriage.

Child marriage is common in Syria, according to a separate rapid needs assessment conducted by the United Nation's refugee agency (UNHCR). But it increased sharply among Syrian refugees younger than 18 and living in Lebanon. Why? Those interviewed by UNHCR researchers said the key, contributing factors included the insecure environment, lack of work, and inability of the heads of households to provide for their families. Some families also use early marriage as a way to keep daughters safe from sexual violence and out of poverty.

Syrian refugees, especially women, have insufficient information on registration, access to aid, and other sexual and gender-based violence prevention-related services.

Ghida Anani, founder and director of ABAAD, emphasized that access to adequate information, knowledge and quality services is paramount for Syrian women refugees in Lebanon. But most refugees—especially those living outside camps—are unaware or unable to access protection services. That means their safety and security is undermined, and they are more vulnerable to exploitation. Syrian refugees, especially women, have insufficient information on registration, access to aid and other sexual and gender-based violence prevention-related services, Anani said. “Combined with challenges related to mobility and legal status in country, and changes in gender roles, displaced women and girls are becoming more vulnerable and at high risk of being affected by gender-based violence,” she said.

In response to these challenges, ABAAD teamed with the Danish Refugee Council, UNHCR, the Christian charity Caritas Austria, the United Nations Office for the Coordination of Humanitarian Affairs (OCHA), and UNICEF to establish transitional safe houses in three Lebanese regions, including Beqaa in eastern Lebanon, and North and Mount Lebanon. Anani said these havens seek to provide shelter and security for Syrian women and their children at high risk or those affected by gender-based violence. With the help of professionals who provide psychosocial care and legal counseling, women can receive support tailored to their needs. Resources are available that can help them try to re-establish a life free from violence.

As the influx of refugees continues, aid organizations—including ABAAD—are likely to be stretched thin and unable to meet the significant needs of those they seek to serve. The problems will likely worsen as public and private services struggle to meet increased demand for employment, education, and healthcare, including sexual and reproductive health services for women and girls.

Two researchers who have worked with NGOs in Syria that focus on sexual and reproductive health rights argued for an overarching solution in a recent commentary in the journal Reproductive Health Matters. Improving the health and well-being of Syrian women refugees and their host communities in Lebanon requires not piecemeal remedies, they wrote, but systematic change that targets the total social environment. Interventions for this population will succeed only if they are focused not just on individuals but also on broader economic, institutional, and policy constraints that hinder women from accessing and receiving the type of care they need, they said.