Whoever Wins the Presidency, the Next Big International Crisis Will Come from Iran 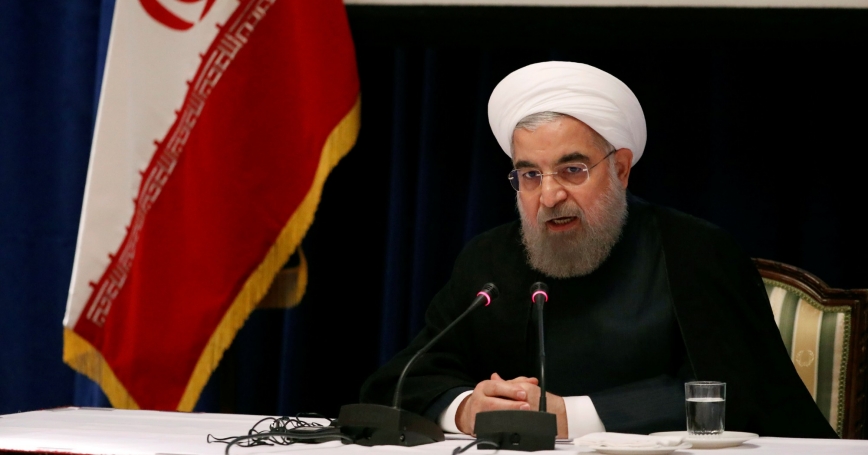 The next U.S. president is likely to be met with multiple international crises after assuming office, and Iran may be one of the most challenging of them.

Despite the heated partisan rhetoric, the signing of the Joint Comprehensive Plan of Action (JCPOA) nuclear agreement between Iran and the P5+1 (United States, UK, France, Russia, China, and Germany) has been beneficial for the United States as Iran has shipped out most of its uranium stockpile, reduced the number of its centrifuges, and accepted intrusive international inspections, making it much more difficult for Tehran to develop nuclear weapons. But the JCPOA has not eliminated the fundamental differences between America and the Islamic Republic.

The Iranian regime continues to support terrorism, back the regime of Syrian President Bashar al-Assad and violate the rights of its people at home.

The election of Hassan Rouhani as president in 2013, while making JCPOA possible, has not led to any major changes in Iran.

Iran holds its own presidential election in 2017 and Rouhani will likely face a strong challenge from the conservative establishment. Khamenei has voiced strong criticism of JCPOA in recent months, claiming that it has not led to a strengthening of Iran's economy because of U.S. “treachery.” While the JCPOA may have calmed some tensions in U.S.-Iran relations, a recalcitrant Iran may test the new American president by pushing the limits of the nuclear agreement and challenging U.S. interests in the Middle East more aggressively than before. Instead of seeking greater engagement with Iran, as was once hoped, Washington may have to adopt tougher policies against the Iranian regime.

Some proponents of the JCPOA hoped that it would lead to a thaw between Tehran and Washington, and perhaps even lead to the end of the long enmity between the two countries. In theory, Rouhani, often portrayed as a “moderate” by the Western media, would have been strengthened by the agreement and able to pursue his agenda of liberalizing Iran both economically and politically.

In reality, Rouhani's presidency has failed to deliver on most of his promises.

The Iranian economy has not improved for the average Iranian; most international banks continue to avoid doing business with Iran despite the easing of nuclear related sanctions.

Low oil prices have also been disastrous for the economy. That may be mostly beyond Rouhani's control, but the president never pushed against the economic or political role of the Revolutionary Guards, leaving Iran's most powerful military and security actor to define Iran's post-JCPOA agenda both at home and abroad.

The Guards' arrest of dual nationals, including Iranian-Americans, has sent a chill through the Iranian diaspora community and even potential foreign investors who once viewed Iran as an attractive market. Iran is simply not a safe bet for most investors.

But Rouhani's biggest failing may be his inability to bridge the gap between U.S. and Iranian interests in the Middle East.

The president and his talented foreign minister may be suitable interlocutors for American and European diplomats, but they are unable or unwilling to pursue policies in order to promote regional stability.

The Guards, under the command of the vaunted General Qassem Soleimani, have recruited tens of thousands of Shi'a fighters to fight for Tehran in Iraq and Syria, and perhaps beyond.

While Iran may have fought the so called Islamic State alongside American allies in Iraq, it nevertheless helped promote the sectarianism that continues to fan the flames of conflict in the region.

Iranian officials have even bragged that their new foreign legion could be used to “liberate” other parts of the Middle East.

At the same time, Iranian speed boats in the Persian Gulf have harassed U.S. warships as Khamenei has called for greater resistance to the U.S. presence in the region.

The Iranian regime's repression at home is as bad as ever before. The Guards and the Judiciary continue to imprison activists, academics, journalists, and artists. Except for a few mildly worded public speeches, Rouhani has offered no resistance to the regime's repression despite his first campaign's promise to create a freer and less “securitized” society.

On the whole, the enthusiasm that resulted from Rouhani's first campaign is unlikely to repeat itself in 2017.

It is rare for Iranian presidents to lose a second term, but Rouhani is likely to face great resistance not only from his conservative political competitors, but also from the millions of Iranians who initially supported his efforts to improve Iran. Khamenei, the Guards, and perhaps even the new Iranian president may test a new American president as she or he confronts multiple global crises.

Challenges from Iran could come in the form of questionable nuclear activities or even more assertive actions in the Persian Gulf and the Middle East.

The partisan rhetoric around the JCPOA has obscured its ability to constrain Iran's potential to develop nuclear weapons; the agreement has been largely a success for America up to this point on that front. But the next U.S. president should adopt a broader policy toward Iran that goes beyond enforcing the JCPOA or engaging Iran diplomatically.

The United States already has sizeable military forces and well-armed allies to counter Iran in the Middle East. But the next U.S. president should highlight the behavior of the Iranian regime at home.

It is not enough for the United States to maintain a strong military in the region or sell more arms to its allies; those efforts have to be accompanied by strong criticisms of Iran's human rights abuses, especially given the Iranian population's disappointment with the Rouhani administration.

In addition, the United States should increase support for Iranian groups seeking a stronger civil society; some may criticize United States ties to such groups as delegitimizing them, but in the absence of meaningful reform from within the system, the U.S. must take advantage of the Iranian regime's vulnerabilities at home.

A U.S. focus on promoting democracy is often tied to past failures at “regime change” in the Middle East, but this does not mean that it cannot be a valuable policy.

The hope for U.S.-Iran détente appears to be over. The Iranian regime is not interested in reform or improving relations with America as long as Khamenei and the Guards reign supreme.

The JCPOA does not mandate that America stop treating the Islamic Republic as an adversary.

The next U.S. president should have the pragmatism to see the JCPOA as benefiting American interests without having to feel constrained by it.

Bottom line: The continuing climate of repression, the next Iranian presidential election, and Khamenei's eventual demise may provide some important opportunities for America's next president.

This commentary originally appeared on Fox News Channel on September 29, 2016. Commentary gives RAND researchers a platform to convey insights based on their professional expertise and often on their peer-reviewed research and analysis.