Being Safer in the Arctic 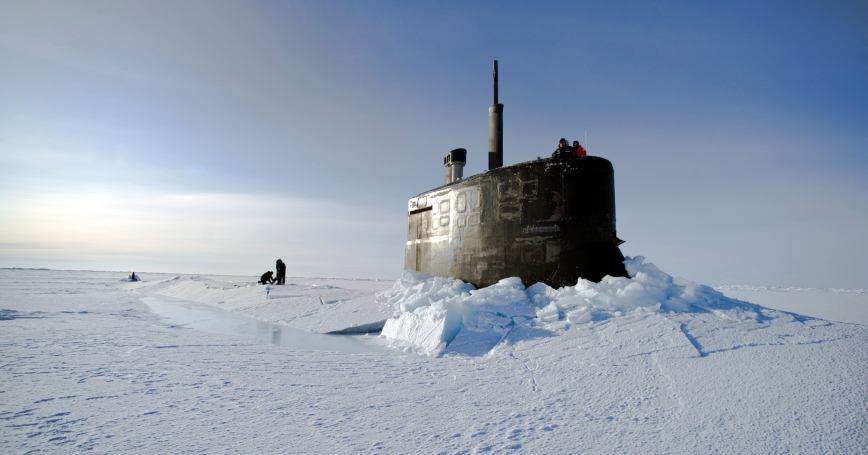 Sailors and members of the Applied Physics Laboratory Ice Station clear ice from the hatch of the Seawolf-class submarine USS Connecticut in the Arctic Ocean, March 19, 2011

In September, the Crystal Serenity cruise ship — bound from Anchorage to New York — completed its historic voyage through the Northwest Passage along Canada's northern rim. This journey made headlines because it is the first tourist vessel to traverse the Arctic route that has claimed the lives of several and imperiled dozens of other adventurers.

This voyage was enabled by record-breaking sea ice melt in the Arctic Ocean. Ocean access during summertime, generally speaking, has been increasing since the 1970s, both with respect to area of open water and duration of melt each year. However, this voyage was made possible by Crystal Cruises's meticulous safety preparation that can fall back on the U.S. and Canadian search and rescue (SAR) systems.

In the event that the U.S. SAR system would have to be tested, what is there to fall back on? Actually, a surprising amount. The Coast Guard maintains a seasonal presence in the Arctic, with one cutter and two helicopters stationed north of the Arctic Circle. Also in the Arctic, the North Slope Borough SAR, a highly capable Native Alaskan organization based in Barrow, and commercial entities like Crowley Marine can provide assets, personnel, and regional expertise. Farther to the south, the high prevalence of Department of Defense assets in Alaska can be requested to augment capability, including the Combat Search and Rescue specialists within the Alaska Air National Guard. Lastly, international SAR support from Canada, Russia, or Denmark can further strengthen response capabilities.

The Arctic is more accessible, but it still has unpredictable conditions, limited infrastructure and communications, and long distances to go for help.

Clearly, there is a safety net. But there are seams that could fail. The SAR system is not designed to coordinate large-scale civilian rescue efforts in the vast, remote, and perilous Arctic region. Of late, the Arctic appears more and more accessible as climate change, technology, and public interest spur possibilities. Although more accessible than it once was, it is in truth still a very formidable place to journey with unpredictable conditions, limited infrastructure and communications, and long distances to go for — or provide — help. The Departments of Homeland Security and Defense, in partnership with native organizations, do their best to prepare to keep people in the U.S. Arctic safe, but a SAR emergency involving a cruise ship, or a downed aircraft, could very possibly stress the system beyond its capacity to save lives.

Here's why. The Arctic is very large and very cold. Long distances lead to long response times, extreme environmental conditions shorten survival times, and unpredictable weather (often the genesis of accidents in the first place) can prevent SAR responders from reaching the scene of an accident. The lack of infrastructure in the Arctic further confounds these challenges. In this environment, people in distress need to be supported in-place, to stave off loss of life or limb until rescue assets eventually arrive…

This commentary originally appeared on The National Interest on October 3, 2016. Commentary gives RAND researchers a platform to convey insights based on their professional expertise and often on their peer-reviewed research and analysis.