Cholera in Haiti: No Surprise This Time Around 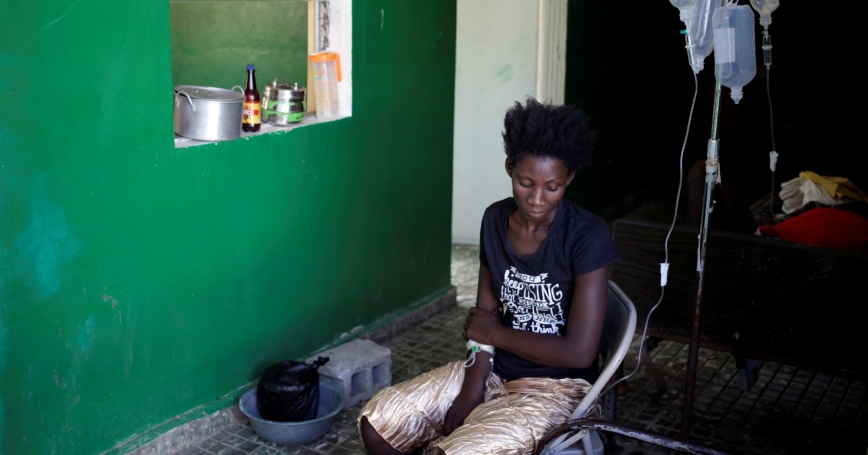 A woman receives treatment for cholera after Hurricane Matthew at a hospital in Les Anglais, Haiti, October 12, 2016

Ten months after a massive earthquake rocked Haiti in 2010, the first cholera outbreak in a century broke out there. The disease never really went away. Early this month Hurricane Matthew swept across the island nation and left devastation in its wake and (no surprise) a resurgence of cholera.

After the earthquake, infected peacekeeping personnel unknowingly re-introduced cholera to Haiti. The country has experienced thousands of cases every year since. This month's hurricane only made matters worse by making rivers and outdoor latrines overflow, contaminating drinking water and causing cholera to spread.

The world's first official disease detective cut his teeth on cholera. In 1854 John Snow, a British doctor, investigated an outbreak of watery diarrhea in London and found a link between the disease and contaminated drinking water. That same year an Italian doctor discovered a comma-shaped bacterium in the tissues of cholera patients who had died and named it Vibrio. Vibrio cholerae live in brackish waters and estuaries.

The recipe for cholera is simple: Vibrio bacteria plus poor sanitation and contaminated drinking water; mix together and drink. The bacteria are spread when victims ingest water or food contaminated by human feces. The disease spreads rapidly and causes massive diarrhea that can kill within hours if left untreated. Victims die of severe dehydration.

When Hurricane Matthew hit, Haiti was still recovering from a huge cholera outbreak that began six years ago.

When Hurricane Matthew hit on October 4, Haiti was still recovering from the huge outbreak of cholera that began six years ago. Nearly 800,000 cholera cases have been reported in Haiti since 2010, including 9,000 deaths. Before the recent storm, cholera was already part of the equation — an average of 770 cases were reported each week. A resurgence in the disease was to be expected.

National and international organizations should have, and did, pre-position aid teams and initial relief supplies in advance of the storm. It took a few days before roads were cleared so that shelter, food and hygiene supplies could begin to arrive in affected areas. Five days after the storm, the Pan American Health Organization began to send in cholera kits, which include rehydration supplies, and water purification tablets and equipment. But it has become clear that more supplies will be needed to address the growing cholera outbreak.

One of the keys to controlling cholera is rapid and appropriate clinical treatment. People become infected and sick within 12 hours to five days after ingesting contaminated water or food.

In the 1960s, researchers studying cholera in Bangladesh developed and proved the effectiveness of oral rehydration salts to treat people with the disease and prevent death from dehydration. A sachet of the salts is mixed into a specified amount of water and used liberally to rehydrate patients until their diarrhea subsides. An adult with moderate diarrhea due to cholera may require six liters or more of the rehydration solution per day when illness is at its peak.

According to the World Health Organization, 80 percent of cholera cases can be treated with oral rehydration solution alone; the most severe cases also require intravenous fluids.

Hurricane Matthew only aggravated an already unfavorable situation, creating a risk of “potential contamination of the drinking water by fecal sludge,” Domique Legros, a WHO cholera expert, told CNN.

In the short run, water purification tablets and water filtration devices can help people get clean drinking water. Human waste disposal must also be controlled, for example through latrines or designated community defecation areas that are meticulously separated from any water supplies. In addition, a little soap and water can go a long way to help maintain a modicum of personal hygiene that will help prevent the spread of diseases, including cholera.

Delays in getting adequate water and sanitation to populations in affected areas will enable more disease transmission cycles and allow cholera to spin further out of control.

The World Health Organization announced plans to send a million cholera vaccine doses to Haiti, but cholera vaccines provide only partial and temporary protection — and they take time to work. While not a mainstay of cholera epidemic control, they will likely help tamp down the spread of disease in the weeks and months to come, but will do little to stem disease spread in the coming days.

Treatment of patients and provision of safe water and sanitation remain the principal approaches to cholera control. Health aid in the coming days should double down on providing rehydration to patients, and clean water and adequate sanitation to affected populations. But in the wake of Hurricane Matthew, the focus of attention should not only be on cholera but also on other health problems that are likely to arise, such as measles and malnutrition.

Haiti faces a much longer road ahead — significant improvements need to be made to water, sanitation and health systems in the western hemisphere's poorest country. In the meantime, tackling cholera head-on should be on the very shortest list of health priorities for disaster relief in Haiti.

Melinda Moore is a public health physician, senior natural scientist and an associate director of the Population Health Program at the nonprofit, nonpartisan RAND Corporation. She is also a professor at the Pardee RAND Graduate School.

This commentary originally appeared on Inside Sources on October 27, 2016. Commentary gives RAND researchers a platform to convey insights based on their professional expertise and often on their peer-reviewed research and analysis.