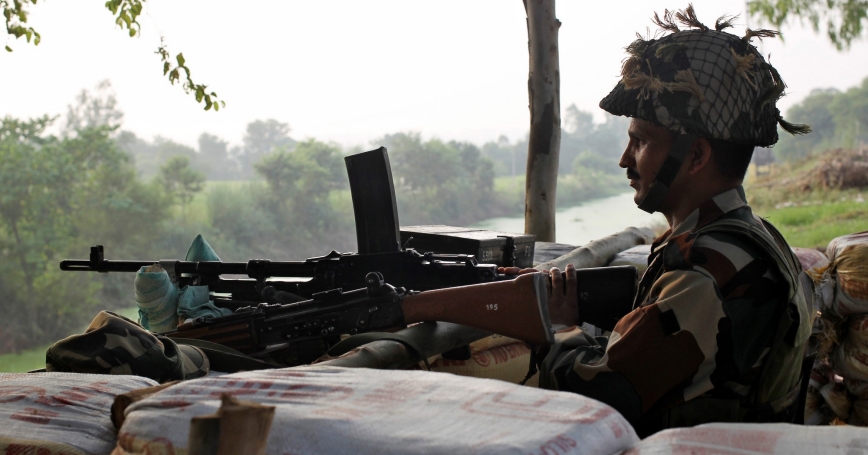 An Indian army soldier keeps guard from a bunker near the border with Pakistan in Abdullian, southwest of Jammu, September 30, 2016

by Rafiq Dossani and Jonah Blank

It could be the storyline of a Bollywood film: Militants trained in Pakistan cross over to India's side of Kashmir, inflict many casualties and bring the two nuclear-armed nations to the brink of war.

Except that this is no fantasy. It is real and depressingly familiar. It's also a sign that India and Pakistan should be considering ways to promote a return to the relative peace that descended on Kashmir for much of the 2000s.

This year alone saw two major attacks: at Pathankot in January and at Uri in late September. Such raids have been going on against both military and civilian targets in the Indian state of Jammu and Kashmir for over a quarter of a century.

With each strike, the Indian government faces increased pressure to retaliate. But even after violent actions outside of the disputed Kashmir region, such as the 2008 attack on Mumbai, India has held back out of concern that any military action might end in a nuclear exchange.

The most recent attack was the deadliest in years, killing 19 soldiers at an Indian army base on September 18. This time, however, India struck back: Ten days later, it reportedly crossed the Line of Control (LOC) with a “surgical strike” that it claims killed 38 militants and two Pakistani soldiers.

The action, while perhaps inevitable, brings risks to peace in the short and long term. Will Pakistan—which denies any role in the attacks on India's side of the line—be content to let India's strike go without a response? If not, will that response take the form of a “surgical strike” of its own or stepped-up support for the militant groups operating against India? If Pakistan does retaliate, will India hold back from responding in kind?

It is precisely this cycle that causes many to fear an escalation to nuclear war. Neither side, obviously, wants that to happen—but the circuit breakers to prevent such an escalation are not certain to work.

The two big powers with influence in the region, the United States and China, have a strong interest in soothing tensions.

The two big powers with influence in the region, the United States and China, have a strong interest in soothing tensions. U.S. National Security Adviser Susan Rice spoke with her Indian counterpart within hours of the LOC strike, and U.S. Secretary of State John Kerry had several conversations with Indian Foreign Minister Sushma Swaraj in the prior week.

In the short term, Pakistan seems to have decided against escalation: It downplayed the significance of India's action, describing it as merely the type of deadly skirmish that is all too common along the LOC.

This was a welcome step. Any de-escalation of tensions requires both sides to be able to avoid humiliation.

While a short-term return to peace remains uncertain, the longer term is even harder to predict. Pakistan's sponsorship of attacks directed against India is not an act of irrationality but the toxic combination of two internal factors that are here to stay. First is the rivalry between Pakistan's military and civilian leadership for political control of the country, and second is the domestic pressure—on military and civilian leaders alike—to respond to turmoil in Indian Kashmir.

When India and Pakistan gained independence from Britain in 1947, the princely state of Jammu and Kashmir initially refused to join either new nation. After a war fought on Kashmir soil, two-thirds of the principality was absorbed in the Indian Union, and one-third has been de facto absorbed by Pakistan.

Since Indian and Pakistani troops turned the LOC into a militarized boundary in 1948, much of the Muslim-majority population of the Indian state has demanded either independence, union with Pakistan or a high degree of autonomy. The latter demand is guaranteed by the Indian constitution but has not been delivered since the 1960s.

The Indian government has swung between attempts to placate Kashmir demands and to stamp them out.

The Indian government has swung between attempts to placate Kashmir demands and to stamp them out. When New Delhi has used a heavy hand—most notably, throughout the 1990s—this has resulted in increased popular alienation and increased Pakistani support both for indigenous Kashmir militants and for non-Kashmir attackers infiltrated across the LOC.

This dynamic has created a bloody roundabout: Repression leads to insurgency and attacks, which leads to more repression, and so on.

Over the past 30 years, the calmest and most secure period in Kashmir was between 2002 and 2008, when a democratically elected local government negotiated autonomy with New Delhi. This effort had the support of two Indian governments from rival political parties.

During these six years, local support for attackers from across the LOC dropped significantly, and Pakistan-based groups like Lashkar-e Taiba and Jaish-e Muhammad (composed mostly of Punjabis rather than Kashmiris) directed more of their activity to India proper.

Once efforts to hammer out an autonomy arrangement foundered, however, the cycle of protest, repression and infiltration of militants began again.

Both India and Pakistan would be well-advised to learn from recent history. For Pakistan, the key lesson is that supporting militant strikes in Kashmir might be domestically popular but will result in international isolation.

While China blocked efforts to have Jaish-e Muhammad's founder placed on a U.N. terrorist list in April, the support of both China and the United States is jeopardized by every attack. Pakistan positions itself as the champion of Muslims in South Asia, but Muslim-majority Bangladesh and Afghanistan have drawn closer to India in the wake of increased attacks in Kashmir.

For India, the key lesson is to address the root cause of its problem in Kashmir rather than merely blame its woes on Pakistani meddling. The root cause is Delhi's inability to make the population of Jammu and Kashmir feel that they are truly part of the Indian nation.

The nation's founding fathers recognized this problem and for this very reason gave Kashmir a constitutional right to autonomy not granted to any other Indian state. But this status remains merely theoretical. It should be turned from word to deed.

The last period of relative calm was ushered in by Prime Minister Atul Bihari Vajpayee of the Bharatiya Janata Party and continued by his Congress Party successor, Manmohan Singh. That shows the potential for bipartisan political accord on the need to take bold steps to assuage, rather than suppress, Kashmiri demands.

Indian Prime Minister Narendra Modi, who holds a larger parliamentary majority than any predecessor since the 1980s, should pick up where Vajpayee and Singh left off.

This commentary originally appeared on Newsweek on October 7, 2016. Commentary gives RAND researchers a platform to convey insights based on their professional expertise and often on their peer-reviewed research and analysis.