Only the U.S. Can Save Syrians 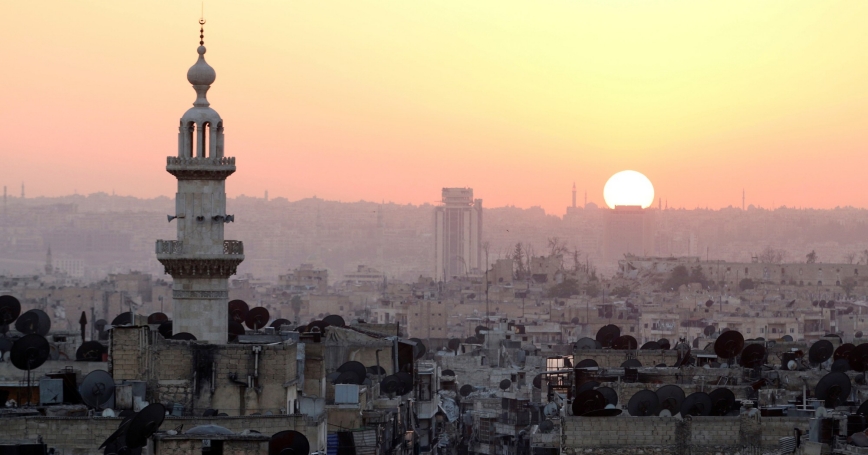 The sun sets over Aleppo as seen from the rebel-held part of the city, Syria, October 5, 2016

Syrian and Russian killing in Aleppo is humiliating the West, disgusting the global community, and challenging U.S. leadership. With elections only five weeks away, Washington has transition fever and is dithering. Unless it acts soon to raise costs to Syria and Russia, their forces could threaten more of the lives of the quarter-million people in Aleppo, and the Kremlin might think that in the future it can mount further challenges to the West and America.

In many ways, the international community has failed Syrians over five-and-a-half years. In April, the United Nations and Arab League envoy to Syria declared that 400,000 had died. Current, intensive attacks on rebel-held eastern Aleppo are raising this number. Killings in Syria could approach the magnitude of the 1994 Rwandan genocide, in which more than a half-million people died.

Russia knows scorched-earth tactics. In two wars in the 1990s against the North Caucasian region of Chechnya, tens of thousands of civilians were killed. The onslaught in Aleppo could resemble block-by-block fighting in Grozny.

Intervention in Syria has brought tactical gains to Russia but not a path to clear achievement, although there is still a possibility Russia will find its footing. In September 2015, when Syrian President Bashar Assad's forces were losing ground to the Islamic State terrorist group and anti-Assad rebels, Moscow dispatched air power and special forces. President Vladimir Putin described the purpose as “stabilizing legitimate power in Syria and creating conditions for political compromise.”

Moscow's air power, the Iranian Revolutionary Guard Corps and Hezbollah militants helped stabilize the battle lines. But Mikhail Khodarenok, a prominent Russian military observer, warned recently that “Syrian armed forces have not conducted a single successful offensive during the past year,” and results of the fighting are “disastrous.” Like his father, Hafez Assad, who ruled Syria for three decades, Bashar is playing the Kremlin, undermining its strategic flexibility.

This could be a reason why, just after inserting forces last year, Putin sought an urgent meeting with President Obama and called for “coordinated actions” against ISIL and other terrorist groups. Since then, Russian Foreign Minister Sergey Lavrov has worked intensively with Secretary of State John Kerry to negotiate multiple cease-fires, but all have failed. Assad opposes them, and Russian forces end up joining his in strikes against regime opponents.

Talking with a group of Syrians recently in New York City, Kerry gave two reasons why the United States had eschewed using military power to bolster diplomacy and cease-fires: Syria's air defenses would have to be taken out, and the U.N. Security Council had not authorized the use of force. He lamented, “American legal theory does not buy into the so-called right to protect.”

As the bloodletting worsens and Russia is seen as complicit, its international image is suffering. By denying a role in the Sept. 19 attack on a Syrian Arab Red Crescent warehouse and convoy, the Kremlin has seemed callous and duplicitous. In contrast, within hours of a U.S. strike on Sept. 17 that killed at least 60 of Assad's fighters, the Pentagon voiced regret.

The Kremlin seems eager for a quick if gory end to the rebellion in eastern Aleppo. It doubtless wants the international fury to fade, although how much Moscow cares about global opinion is a question. In any case, Russia might think that an America in political transition will be less able to rally global condemnation.

This would not be the first time the Kremlin sought to exploit a U.S. change in power. At a June 1961 Vienna summit, Soviet Premier Nikita Khrushchev “beat the hell out of me," as the new President Kennedy later said. Two months later, the Berlin Wall began to rise. After the August 2008 Russian invasion of Georgia, President George W. Bush imposed only light sanctions; months later Obama lifted them and pursued a “reset” to improve relations.

Transitions are not always times of U.S. vulnerability. In 1946, less than a year after assuming the presidency, Harry Truman pressured Soviet leader Joseph Stalin to withdraw troops from northern Iran. This is the kind of transition Washington needs now.

A tragedy of historic proportion is unfolding in eastern Aleppo. Only U.S. diplomacy augmented by compulsion might avert its destruction. Perhaps fearing forceful action, the Kremlin warned Saturday that U.S. strikes on Syrian government forces would lead to “terrible, tectonic consequences.” The same day, Syrian and Russian forces bombed the largest trauma hospital in eastern Aleppo, causing it to close.

The next U.S. president will be at a disadvantage dealing with Moscow if America refuses to arm defenders in eastern Ukraine against Russian aggression, and Washington persists in its reluctance to challenge Moscow over its participation in the siege of Aleppo. In the near term, the world will increasingly question U.S. leadership. The sooner Russia and Syria perceive U.S. determination, the more likely these consequences can be avoided — and the less likely Aleppo will become a greater humanitarian calamity.

Colin P. Clarke is a political scientist at the nonprofit, nonpartisan RAND Corporation. William Courtney, an adjunct senior fellow at RAND, is a former U.S. ambassador to Kazakhstan, Georgia and the U.S.-Soviet nuclear testing commission.

This commentary originally appeared on USA Today on October 5, 2016. Commentary gives RAND researchers a platform to convey insights based on their professional expertise and often on their peer-reviewed research and analysis.