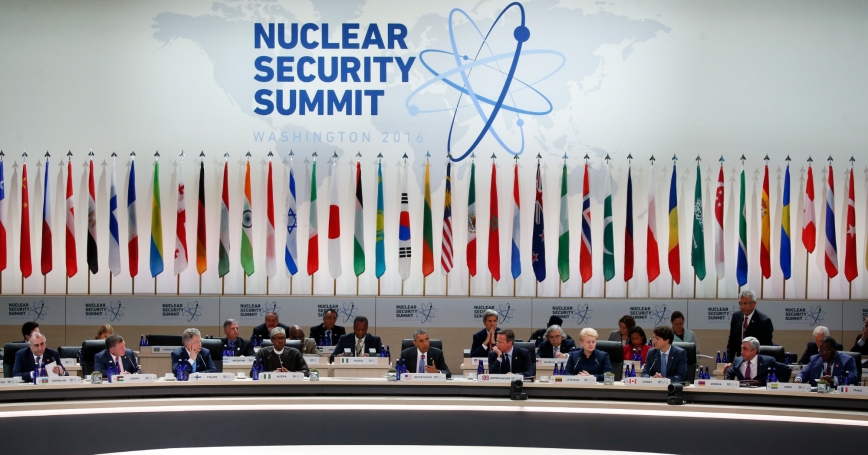 Despite concerted efforts by the Obama administration beginning with the president's Prague speech in 2009 and biannual Nuclear Security Summits, the potential for state proliferation of nuclear weapons capabilities seems more likely now, even with the signing of the Joint Comprehensive Plan of Action, or JCPOA, with Iran. North Korea's recent nuclear and missile tests and a likely arsenal of 8-12 weapons clearly demonstrates growing capabilities that are rapidly becoming a threat to allies in the region and even the U.S. homeland.

On Monday, Russia's President Vladimir Putin signaled a halt to the bilateral Plutonium Management and Disposition Agreement with the United States that would have resulted in the two nations disposing of 34 metric tons of plutonium with the potential for producing 17,000 nuclear warheads.

A public dialogue in the United States about extended nuclear guarantees and the modernization of the nuclear triad unnerve many nations that rely on the U.S. nuclear umbrella as a foundation of their security and defense. This talk led several nations — Japan, South Korea and Saudi Arabia to name a few — to consider whether their long-term security interests are better served with national nuclear weapons programs.

Even worse, these new national programs would likely be designed for deterrence against regional adversaries. Such objectives favor smaller yield weapons and present a greater chance of use. Both the potential for increasing the number of nuclear weapons states and increasing potential for use are unthinkable outcomes.

Notwithstanding significant efforts to eliminate loose fissile material, terrorist interest in acquiring nuclear capabilities has not waned. This interest is amplified with persistent proliferation challenges such as concerns about security at civilian nuclear sites, failure to properly and quickly dispose of the highly enriched uranium or plutonium at these facilities, difficulties in detecting nuclear smuggling and the proliferation of nuclear weapons technology.

Against this increasingly disconcerting backdrop, the United States could take several key steps to reverse these trends.

First and foremost, the United States should reassure allies about the viability of U.S. nuclear security guarantees and the stockpile. The next administration will need to conduct a Nuclear Posture Review (PDF) to set the country's nuclear policy for a five- to 10-year period. This review will undoubtedly include guidance on such issues as stockpile modernization, strategic deterrence and the security guarantees. By necessity, it will be conducted within the context of an increasingly aggressive Russia. Until this review has been completed, no major changes to U.S. nuclear posture should be unilaterally undertaken.

The U.S. should emphasize its absolute support for the goals of the NPT — nonproliferation, disarmament, and peaceful uses of nuclear energy.

Second, the United States should emphasize its absolute support for the goals of the Nuclear Non-Proliferation Treaty, or NPT — nonproliferation, disarmament and peaceful uses of nuclear energy. These three goals require maintaining a delicate balance. For example, unilateral disarmament by the United States could lead to proliferation as nonnuclear states look to develop nuclear capabilities to assure their security. Likewise the peaceful uses of nuclear should not be allowed to include the proliferation of enrichment capabilities throughout the globe. Assuring this balance remains the most effective way to achieve the NPT's goals.

Third, the two most immediate state nuclear proliferation issues must be addressed: Iran and North Korea. On Iran, the United States should build support for the JCPOA, both domestically and across the globe. The JCPOA was necessary to curtail Iran's near-term enrichment capacity for 10 years and bans reprocessing for 15 years, as well as to reduce Iran's stockpile of low-enriched uranium. Despite being in the early stages of implementation, Iran appears to be adhering to the terms of the agreement. The lessons learned in the negotiation of this framework agreement could also be used to strengthen nuclear monitoring and verification around the world.

International approaches toward an increasingly unpredictable and capable North Korea should be reinvigorated. A recent Council on Foreign Relations report highlights the inadequacy of strategic patience and calls on China to play a more productive role in pressuring North Korea to abandon its nuclear program.

Fourth, Russia's nonstrategic nuclear weapons remain a growing concern and should receive considerable scrutiny. They are the most destabilizing weapons in their nuclear arsenal, given the potential for loss of control and potential for use. Recent revelations about development of low yield warheads exacerbates an already concerning trend. These nuclear weapons pose a serious threat of fumbling into a nuclear confrontation.

Fifth, intelligence and international information sharing should form the foundations for addressing nuclear terrorism, which remains a grave concern. The world's worst weapons in the hands of the world's worst people is a dangerous combination. New technologies, strong international agreements, and national and international law enforcement should also combine to reduce this threat. Civilian nuclear facilities should assure the prompt removal and secure storage of spent fuel. International efforts such as the Global Initiative to Counter Nuclear Terrorism, the Proliferation Security Initiative and most recently the Nuclear Terrorism Convention (PDF) should be strongly supported across the globe.

Nuclear weapons continue to pose a significant threat to the United States and its allies. Strong and viable global nuclear nonproliferation norms should remain a cornerstone of U.S. security now and into the future. Friends and allies must continue to have confidence in the U.S. strategic nuclear guarantees. Failure to do so could result in a new arms race with the global proliferation of nuclear weapons capabilities and an increased likelihood of a nuclear conflict.

This commentary originally appeared on U.S. News & World Report on October 5, 2016. Commentary gives RAND researchers a platform to convey insights based on their professional expertise and often on their peer-reviewed research and analysis.