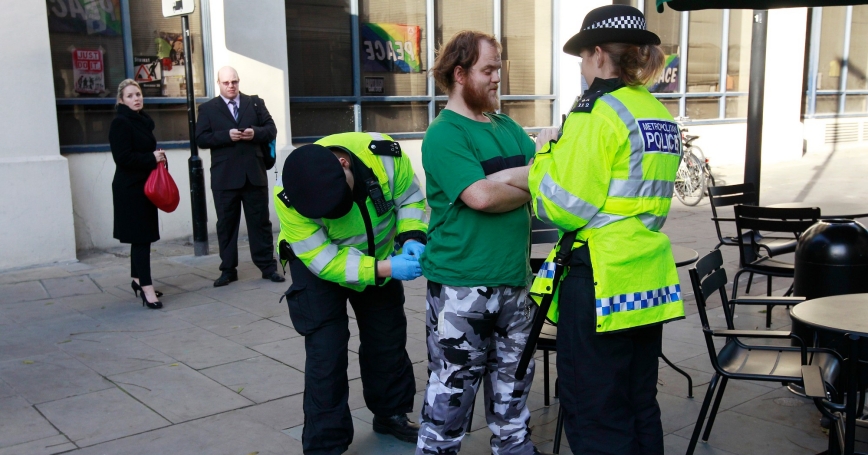 Police search a demonstrator from the Occupy London movement as he leaves a building owned by banking giant UBS in the City of London, November 30, 2011

by Lucy Strang and Chris Giacomantonio

Recent reports from Her Majesty's Inspectorate of the Constabulary, as well as independent research, highlight a number of problems with the police practice of stop and search in England and Wales. These include their disproportionate use against minority communities, the relatively low “hit rate” (the proportion of searches where an illegal item is actually found), issues with the quality of records kept following searches, and tensions between police and communities resulting from overuse of the practice.

Responding to these persistent concerns, the UK's Home Office commissioned the College of Policing in 2014 to develop a new training package and define a new standard of practice for the use of stop and search. Following pilots in six English police forces in 2015, the new national training package is ready to be rolled out.

The aims of the stop-and-search practice going forward are that officers will undertake fairer, more effective searches and engage positively with members of the public, especially those they choose to search. In addition, the new practice is supposed to be consistently applied across all regions, whether it's urban Greater Manchester or rural Cambridgeshire.

In partnership with the Hebrew University of Jerusalem and the University of Oxford, RAND Europe provided a process evaluation of the pilot phase of the College of Policing's stop-and-search training package. The evaluation examined how the ultimate goals of the training were translated into practice and applied across the pilot UK forces.

The evaluation found changes in practice advocated by the new training package are achievable, if ambitious. However, the training is not related to a change in law — meaning it is not strictly enforceable — and instead promotes a different way of interacting with citizens. In turn, it became clear that a significant challenge of making this training “work” was developing consistent and persuasive communication about the reasons for, and importance of, the training.

Three key factors were identified that make this consistent and persuasive communication difficult. Firstly, there are 43 different police forces within England and Wales, which may make it challenging to communicate a consistent message across all forces. Secondly, while national bodies such as the College of Policing, the Home Office and the Equality and Human Rights Commission are pushing for this change, we found differences in how relevant issues were articulated on the job. Finally, each police officer is autonomous and accountable primarily to his or her interpretation of the law — a concept known as “constabulary independence.” While officers are, of course, answerable to a chain of command, the decision of whether and how to respond in a specific situation ultimately rests with each individual officer.

The evaluation identified a number of communication issues during the implementation of the pilot stop-and-search training package. In some instances officers received unclear or contradictory messages regarding the purpose of the training, and supervising officers were not fully aware of the changes being suggested in the training course. The main messages of the training were not always clearly and consistently communicated from the national level to the local forces, which resulted in differences in both the content of the training and the messages surrounding the training in each pilot force. In some cases, this seemed to limit the willingness of officers to buy into the training programme being offered, especially where they were already sceptical about the need for such training or felt that the training was politically motivated.

In short, while a great deal of effort was spent developing the training content, issues with the design and clarity of the communications plan hampered its implementation. This highlights the importance of getting the communications of training programmes correct from the outset, to ensure that the audience is as receptive as possible to its content.

As the training is rolled out nationally, a good place for trainers to start would be to explain to supervising officers why the change of practice is important, as their buy-in may instil confidence in the police officers that they oversee. To achieve this aim, officers need to receive consistent and persuasive messages from all levels about the purpose and goals of the training.

Exactly what messages will be communicated to police forces and officers at the nationwide roll-out of the training package remain to be seen, although the College of Policing plans to include training packages for senior leaders, supervisors and frontline officers, and also will include a more detailed “Guidance for Trainers” document. In any case, our evaluation has highlighted the important role of consistent and persuasive communications, not just in the training room, but within and between the organisations involved. This lesson will be relevant to any attempt at police reform, but especially one as widely discussed and debated as stop and search.

Lucy Strang is an analyst and Chris Giacomantonio is a former senior analyst at RAND Europe. Both were involved in the evaluation of the UK College of Policing's new stop-and-search training.

This commentary originally appeared on Police Oracle on October 27, 2016. Commentary gives RAND researchers a platform to convey insights based on their professional expertise and often on their peer-reviewed research and analysis.