Taiwan Should Not Worry About the Vatican 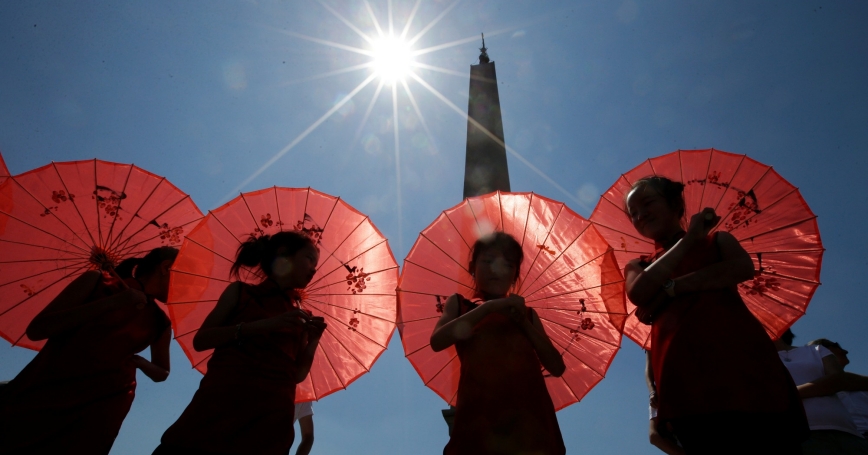 Young Chinese faithful shelter from the sun as Pope Francis leads the Angelus prayer in Saint Peter's Square at the Vatican, May 22, 2016

Last month, Taiwan President Tsai Ing-wen dispatched Vice President Chen Chien-jen to the Vatican for a ceremony to declare Mother Teresa a saint. Chen's trip came amid growing concerns in Taipei over whether the Holy See intends to switch its diplomatic recognition from Taiwan to China. Pope Francis has recently expressed eagerness to reestablish ties with the mainland—which Beijing severed in 1951 during its crackdown on religious organizations—that might lead to progress allowing China's approximately 6 million Catholics on record (the true number might be much higher) to openly practice their faith. Taiwan has tried to play it cool on the Vatican's outreach, with Deputy Foreign Minister Wu Chih-Chung stating that the situation should not be viewed as a “zero-sum game” while acknowledging that “many things are changing.”

Many things are changing, indeed. Since Tsai's inauguration in May, cross-Strait relations have taken a antagonistic turn stemming from disagreement over the “1992 Consensus” — an alleged agreement reached with Tsai's predecessor over interpretation of “one China.” This has prompted Chinese President Xi Jinping to begin a concerted campaign to bend Tsai to his will. Xi, for example, in June directed the cessation of both official and semi-official ties with Taiwan. He has apparently reduced the number of tourists China sends to Taiwan to harm the island's economy. Xi also flexed China's military muscle in the run-up to Taiwan's elections and presidential inauguration, when the People's Liberation Army conducted military exercises involving live-fire and island-landing operations.

A component of this strategy is clearly designed to restrict Taiwan's international space as well. This manifests itself in annoying ways, such as the longstanding effort to force Taiwan to compete in the Olympics or participate in the World Health Assembly as “Chinese Taipei.” But it also features the end of the so-called “diplomatic truce” between China and Taiwan. Dating back to 2008, Beijing and the previous Kuomintang leadership agreed that China would not pick off any of Taiwan's 23 remaining diplomatic partners. The agreement held until just before Tsai's inauguration when Beijing accepted The Gambia's request to establish formal diplomatic relations with China. To be sure, The Gambia had requested a switch in diplomatic recognition in 2013, but Beijing held off on accepting the request to honor the truce. In the current context, however, Xi saw greater benefit in sending a political message to Taiwan that it could further restrict its international space at will.

Losing The Gambia was troubling enough for Taiwan, and indeed, it represented the opening salvo in the end of the diplomatic truce. But it pales by comparison to the despair Taiwan would feel if it lost the Vatican. The Holy See is Taiwan's sole remaining diplomatic partner in Europe, with all others being small and impoverished nations scattered across Africa, Latin America, and Oceania. Beijing knows this and is probably entertaining Vatican requests not out of genuine interest in reestablishing relations, but to put Taiwan on edge—a classic power play by threatening something your adversary deeply values.

Beijing probably has virtually no interest in renewing relations with the Vatican because there is no clear domestic incentive to do so. Indeed, Xi is strengthening his control over China's domestic affairs. In April, for example, China passed a new law that becomes effective next year, which states that all foreign NGOs must be registered with the state. China under Xi has also been moving away from accommodation with Catholicism. Beijing requires that local religious leaders, including those of the church, answer exclusively to the Communist party and not any outside religious authority. Underground churches are routinely under assault. Churches and crosses have been razed in recent months. And Communist party religious minders are attempting to infiltrate church services. These trends should cast doubt over the seriousness and viability of the tentative agreement reportedly reached in recent weeks between the Vatican and China on the sensitive issue of bishop appointments in China.

But what if Beijing genuinely wants an agreement for the prestige value and a potential papal visit—the first ever to China? While an enticing possibility, such actions from the Communist party's perspective would open the door to more, not less, outside influence over China's domestic affairs. It is hard to reconcile facts on the ground with such a decision. Moreover, assuming Beijing did see value in renewing relations with the Vatican, doing so at this early stage—just past Tsai's 100 days in office—would, in essence, be going for Taiwan's jugular and would strain cross-Strait relations further, reducing the prospects for acceptance of the 1992 Consensus. China's strategy over the last few months seems to be simply worrying Taipei with the possibility, no matter how unrealistic.

This commentary originally appeared on PacNet, CSIS on October 4, 2016. Commentary gives RAND researchers a platform to convey insights based on their professional expertise and often on their peer-reviewed research and analysis.