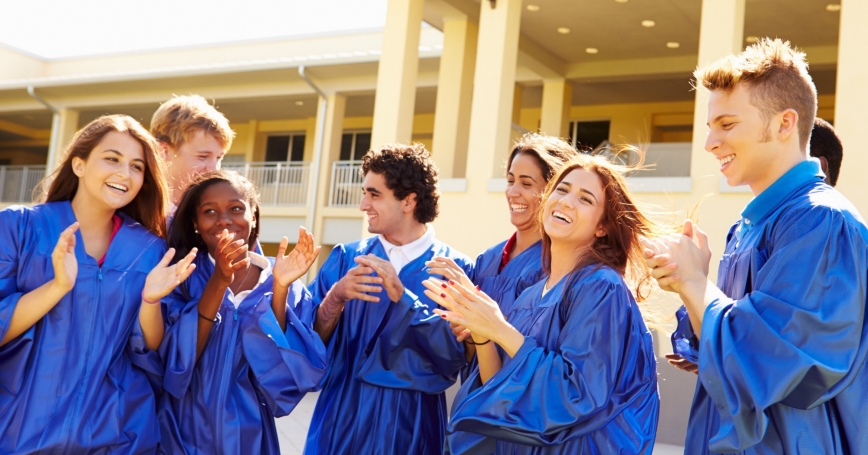 This week's White House announcement of record high school graduation rates is good news for graduates and their communities. Attaining a high school diploma is a crucial first step toward post-secondary education or a rewarding career—and a better life, research has consistently shown. A high school graduate is more likely to own a home and be able to support the family that inhabits it.

Graduation rates among U.S. high school students have risen for the fourth consecutive year, to 83 percent. This statistic is especially heartening because gains were reported across all major subgroups, including students of color, low-income students and English learners.

High school graduation rates have risen for the fourth consecutive year, to 83 percent.

Should the Obama administration and its various education initiatives be given credit for this upward trend? Perhaps. But other fonts of change may have helped bring it about, such as state-supported educational reforms and broad societal changes that include decreasing crime and unemployment rates in many regions.

Rising graduation rates do not necessarily indicate that student achievement has risen along with them. These higher numbers could also reflect graduation inflation, efforts that make it easier for more students to exit high school—on schedule—to “Pomp and Circumstance.” States and school districts could do this, for instance, by removing barriers to graduation like those that require students to achieve minimum scores on statewide tests.

More students also may be hanging around to don a cap and gown because schools could attempt to make a class more engaging in ways that may not improve the quality of instruction or increase learning. Many schools have adopted technology-based curriculum programs that provide game-like environments or involve students in real-world problem solving without clear evidence that such programs lead to higher achievement.

Scores on national tests can provide some evidence of whether achievement has risen along with graduation rates, and those scores have declined slightly. Although these tests do not measure all of the content that students study in high school, this decline suggests that more graduates does not necessarily mean more highly skilled and knowledgeable students are graduating.

The fact that the graduation rate has risen consistently might suggest that reform is paying dividends.

However, the fact that the graduation rate has risen consistently over the past few years, for all student groups and in most states, might suggest that reform at the federal, state and local levels is paying dividends.

Over the past eight years, the Department of Education has invested in a number of initiatives that may have contributed to the increase in graduation rates. These include School Improvement Grants, which provided increased financial resources for the lowest-performing schools; programs that aim to improve teacher and school leader effectiveness; and support for high schools to adopt innovative instructional programs and to form partnerships with colleges and employers.

A trickle-down educational effect could also be at work. The administration's higher-education initiatives, including efforts to make college more affordable, might be partly responsible for that upward high school graduation arrow. Low-income students who can view college as a realistic option may be motivated to—and see the value in—graduating from high school.

In addition, a majority of states have implemented new college- and career-ready standards that have led to the adoption of new curriculum materials and instructional methods, which in turn could have improved student engagement and retention. More students also may be sticking with high school until graduation because schools have increasingly emphasized the development of nonacademic skills such as the ability to form healthy relationships or to stay with a problem when it gets challenging. Students develop the emotional and social skills they need to succeed.

Figuring out who, or what, should get credit for the boost in graduation rates is obviously a complicated equation without a clear answer. Changes are being made that are moving the needle in the right direction. But decoding which reforms are making a difference will require careful inspection of a broad range of student data that goes deeper than counting how many high school students make it to the finish line.

Laura S. Hamilton is associate director of RAND Education at the nonprofit, nonpartisan RAND Corporation and a faculty member at the Pardee RAND Graduate School.