A Changing Cuba May Create Risks for Maritime Border Security 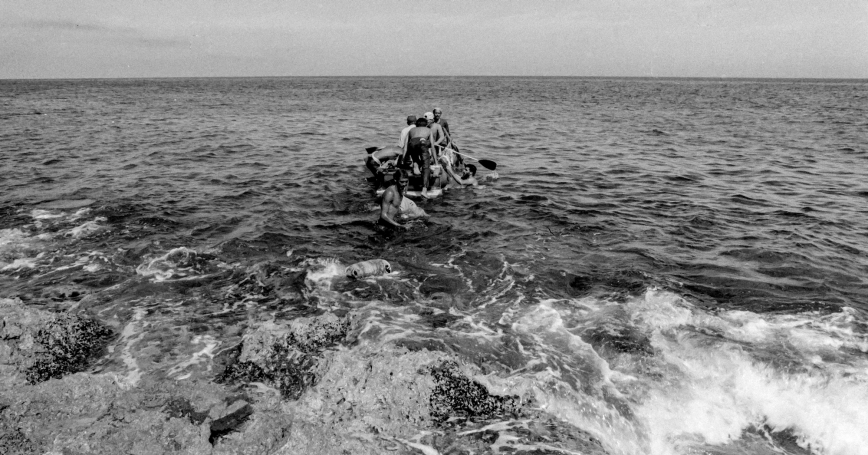 Would-be emigrants launch a makeshift boat towards the U.S., on the last day of the 1994 Cuban Exodus, Havana, September 13, 1994

by Scott Savitz and Paul DeLuca

The United States has long waited for—and sometimes actively aspired to—regime change in Cuba. For nearly 60 years, the United States has opposed the Castro regime's misrule at home and support of communist insurgents and dictatorships abroad. Cuba's alliances with the now-defunct U.S.S.R., and more recently with Venezuela, added to the United States' distaste for the regime.

Cuba is beginning to change in ways that may enable it to become a more open and free society.

Over the last two years, the Obama administration has tried to reach out to Cuba. In a particularly striking action, on Wednesday the U.S. abstained from voting on a United Nations resolution condemning the U.S.'s own embargo against that nation. At the same time, the island has also shown signs of limited internal reforms. Political scientists and historians may debate to what extent these reforms stemmed from Cuba's dire economic state and the aging of its octogenarian leadership, and the extent to which U.S. efforts at reconciliation have contributed to the island's changing policies. Regardless, it appears that Cuba is beginning to change in ways that may enable it to become a more open and free society, which should be welcomed.

These changes, however, may create risks with respect to U.S. border security. The Castro regime has been able to curtail the movement of migrants to the United States, despite the island's poverty. The de-communization of the economy could worsen living standards for some Cubans in the short term, as was the case in many ex-communist countries before they recovered. The Castro regime's ability to control domestic crime may also diminish; Venezuela's crime rate has shot up as its government totters, and the same could occur in Cuba. These conditions, in the absence of a strong central authority curtailing migration, could impel large numbers of Cubans to attempt to cross the Florida Strait in search of a better future. The actual collapse of the Castro regime, if it leads to a more divided government or one that lacks control over parts of the island, could contribute to disorder that would both stimulate and enable a mass exodus. Such migration could occur even if the U.S. changes its policy allowing Cubans who reach U.S. soil to stay. While treating Cubans like other unauthorized migrants might inhibit some from undertaking the trip, the possibility of successfully evading the authorities and living clandestinely could still entice some migrants, as it has those of other nations.

There has not been a mass migration to the United States via sea for over two decades, despite the 2010 Haitian earthquake and ongoing economic challenges in much of the Caribbean. In part, this reflects the strong deterrent posture of the U.S. Coast Guard as it demonstrates presence along major migration routes and its continuing efforts to rescue and repatriate the limited numbers of people who undertake this journey. However, like any military service or agency, the Coast Guard and Customs & Border Protection's Air and Marine Operations units can be overwhelmed by sheer numbers. Moreover, Cuba could serve not only as a source of migrants, but also as a way-station for migrants from other nations. The island is only 50 miles from Haiti and 85 from Jamaica (as opposed to 90 miles from Key West, Florida). If the U.S. were unable to stem a tide of mass migration by sea from Cuba, and there were few controls within Cuba to inhibit movement to the island, populations from other islands could be tempted to join the fray.

The risks of post-dictatorial disorder sparking mass migration via sea are substantial.

The risks of post-dictatorial disorder sparking mass migration via sea are substantial, as Europeans have found over the last five years. In 2011, Libya and Syria both had uprisings against their respective dictators. The collapse of centralized dictatorships, and the ensuing civil wars, have caused millions of people to flee their homes, with many of them trying to reach Europe by sea. Amid Libya's chaos, the country has become a hub for people-trafficking from other nations. A failed state in close proximity to developed countries has facilitated movements that even the vastness of the Sahara and numerous deaths in the Mediterranean have not deterred.

While immigration benefits the United States in many respects, having thousands of people risk their lives at sea on unstable, overloaded vessels would be a humanitarian disaster; the many bodies that have already washed up on Europe's shores are testament to that. Nearly everyone in the United States is an immigrant or the descendant of immigrants, and most recognize the value that immigration can contribute to this country. However, it needs to be conducted via a managed process, not by having individuals risk their lives on fragile boats and literally wash up en masse.

In addition to serving as a transit route for migrants, Cuba could also become one for drugs. Under communism, Cuba has also been able to stamp out international drug trafficking by executing those associated with it. However, to the degree that the Castro regime's tight control over its maritime borders and internal activities begins to falter, drug traffickers may detect opportunities to move product through the island. Its proximity to other islands could enable South American cocaine to reach the United States via a series of short hops.

The emergence of a less totalitarian Cuba, one with which the United States can better engage, is a welcome development in most respects. The United States can and should continue to promote a Cuba that is more open to ideas and personal freedoms. However, as with the fall of dictators in Libya and Syria, it should anticipate the possibility that a changing Cuba will contribute to less secure maritime borders—and plan accordingly to deter and interdict mass movements of both drugs and people.

This commentary originally appeared on U.S. News and World Report on November 1, 2016. Commentary gives RAND researchers a platform to convey insights based on their professional expertise and often on their peer-reviewed research and analysis.