Autonomous Vehicles: Imagining the Day-to-Day of the Future 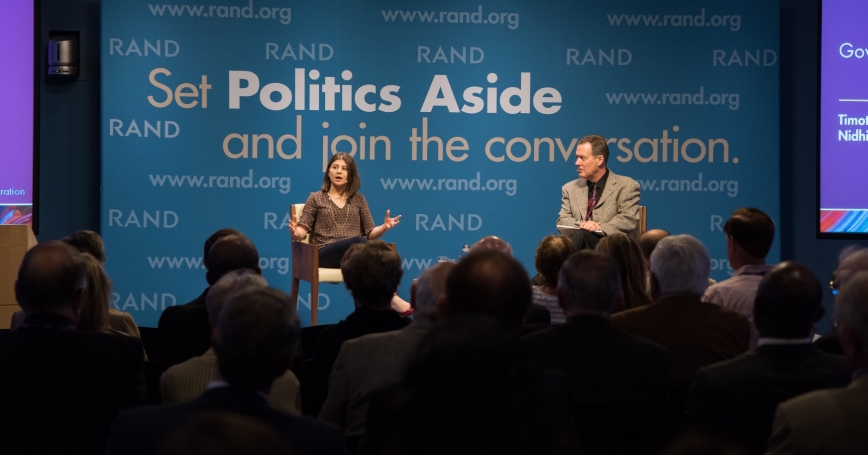 What might daily life be like once autonomous vehicles populate the roads? With the help of colleague Timothy M. Bonds, the RAND Corporation's Nidhi Kalra described what may occur in the not-too-distant future. The pair held the conversation at Politics Aside, RAND's biennial event that brings together experts, policymakers and others for a nonpartisan discussion about policy issues for 2017 and beyond.

Kalra, a senior information scientist who released a study earlier this year on autonomous vehicles, is co-director of the RAND Center for Decision Making Under Uncertainty. Bonds is vice president of the Army Research Division and director of the Arroyo Center at RAND.

Nidhi Kalra: We've come off an election and we're thinking about the nature of our democracy. One of the things everyone can agree on is that foundation of democracy includes choice. The reason we should love autonomous vehicles is because they will democratize transportation.

Right now, I have a car that seats four people. This is a necessary asset that is enormously inefficient. It sits in your driveway or parked somewhere, taking up precious land. It's expensive, inefficient, takes up other resources—and you can't get along without it. But lets pretend it's 10 to 15 years from now.

Bonds: So, future Nidhi, do you own a car?

Kalra: I don't. I gave mine up about five, six years ago.

Bonds: When you need a car, what do you do?

Kalra: I have an app for that. Let's say I want to go get my hair cut and the salon is a couple of miles away. I call and this one-person pod comes, and I get in it and go where I need to. If I need to go downtown, there's a funny, caterpillar-like shuttle bus I get on with other people. There is coffee on board, Wi-Fi. It's great.

If I need groceries, I don't even use a car, it's this little pod thing, and I just say, “Go pick up my groceries.” My kids play soccer, so when I need them picked up, I call a specific vehicle, that allows me to watch them in the car so I can do the other things I need to do.

Bonds: When your robo-ride shows up is it dirty, broken and running on empty like cars we own often can be?

Kalra: No. It's always the newest model. This car gets used so much, so unlike my old car, which just sat in my driveway. The turnover is high. It's always the latest technology. The service I use keeps it clean. My old car had Cheerios all over the floor. Autonomous vehicle use is really convenient. It's cost-effective, too. I used to have to pay an arm and leg to have my car sitting in my garage. Now I pay per trip.