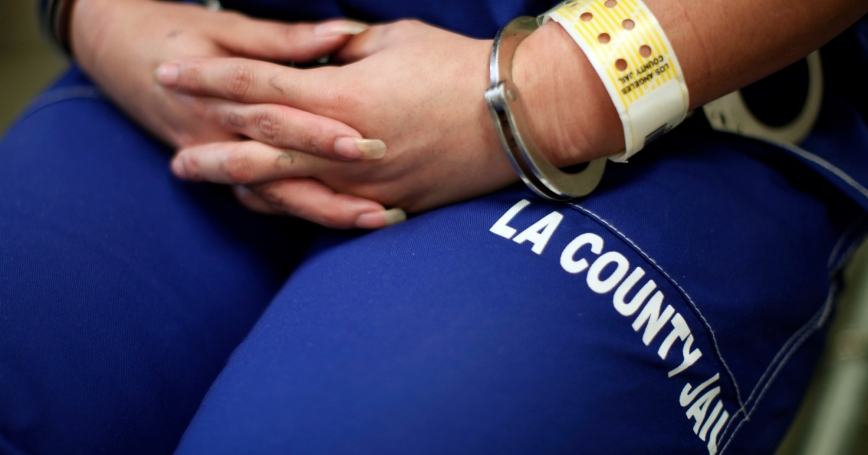 A woman sits handcuffed after arriving at the Los Angeles Century Jail for Women in Lynwood, California, April 26, 2013

California's Public Safety Realignment Act (AB109), transferred the responsibility for many nonviolent offenders from the state prison system to county jail or local probation. Most efforts to understand the effects of this law have understandably focused on jails, courts and public safety. But at RAND we focused on another key challenge to inmates' successful re-entry — the health of such returning offenders and their need for physical, mental health and drug treatment.

Take one example. A small employer with a paint company told us, “I support those who are coming out of prison. My cousin was incarcerated, and so I try to do my part to help ex-offenders with a job. I train them, and they have been very good at their work. However, all too often I find that their untreated drug needs eventually interfere with their ability to hold down the job. I don't know where to get help with this. I almost feel like I should open up my own treatment facility.”

This was just one of the stories we heard as we looked at the health treatment needs of offenders returning to local communities as the state drew down its prison population. What we found was that offenders released from prison or jail — even low-level offenders — have high mental health and drug treatment needs. As the story shows, such health issues affect their chances of finding and keeping employment, but more broadly they get in the way of reuniting with their families and supporting their children upon release. Just as problematic, realignment disrupted systems that once linked returning offenders to health care services, leaving many without the ability to access health care. On top of that, it is estimated that 8 out of 10 individuals returning to local communities lack health insurance, which means that they become part of the uninsured population that a county must care for.

California could lead the nation in developing ways to effectively address the health needs of the formerly incarcerated.

Dire as this situation is, there is some good news: California is at a unique point to lead the nation in developing ways to effectively address the health needs of the formerly incarcerated population. Two major policies can help California seize this opportunity. First, health care reform, implemented in 2010, offered a historic window to improve access to health insurance under Medicaid expansion, which allows low-income single adults — and formerly incarcerated individuals — to be eligible. Our research estimated that the majority of the formerly incarcerated in California would be eligible for Medicaid (known as Medi-Cal in California). Counties understand the importance of enrolling offenders in Medi-Cal, and the state and counties have implemented strategies to enroll those in prison or in county jail prior to their release to the community.

Despite this opportunity, enrolling offenders in Medi-Cal is still a challenge. Low literacy, lack of proper documentation and little or no experience with the public health care system have exacerbated this challenge. Further, such efforts require partnerships among county criminal justice, health and welfare departments, which have little experience working together. San Diego County understood the problem of documentation and has focused initially on getting returning offenders documentation needed for Medi-Cal eligibility. Despite these efforts, we have further to go.

The other key health policy is California's new Drug Medi-Cal Organized Delivery System waiver program, which will enable participating counties to develop and pilot coordinated delivery systems for Medi-Cal-eligible individuals with substance-use disorder treatment needs. The waiver program will enable counties to improve their delivery of care systems and provide more intensive services for those with substance-use disorders, including those re-entering communities from the criminal justice system.

California ranks second in the nation in state prison population and first in jail population. We are now at a point where California — through Medicaid expansion and the Drug Medi-Cal waiver — has the opportunity to lead the nation in improving health care services for this population. This is assuming that in the near-term Medicaid expansion will remain intact under the new Trump administration for those states that already have implemented it.

But we need to be smart about it. Our assessment is that as counties develop their comprehensive plans for the Drug Medi-Cal Organized Delivery System, they will need help in identifying strategies to help people re-entering communities from the criminal justice system gain easier access to health care resources. Counties will also need help in refining their approach to Medi-Cal enrollment of this population. It also will be important for counties to bring on board community-based organizations with a history of working with this population, and employers who are trying to support this population.

In short, health needs can be significant challenges for those seeking successful re-entry into communities. But recent health policies promise to significantly reduce that barrier. By taking full advantage of this opportunity, we can get returning offenders the help they need and encourage others to help, like the painter who told us his story of support for the formerly incarcerated.

Lois Davis is a senior policy researcher at the nonprofit, nonpartisan RAND Corporation and a professor at the Pardee RAND Graduate School. Susan Turner is an adjunct senior behavioral scientist at RAND and a professor at UC Irvine.

This commentary originally appeared on San Francisco Chronicle on November 22, 2016. Commentary gives RAND researchers a platform to convey insights based on their professional expertise and often on their peer-reviewed research and analysis.