Getting the Most Out of Data Science 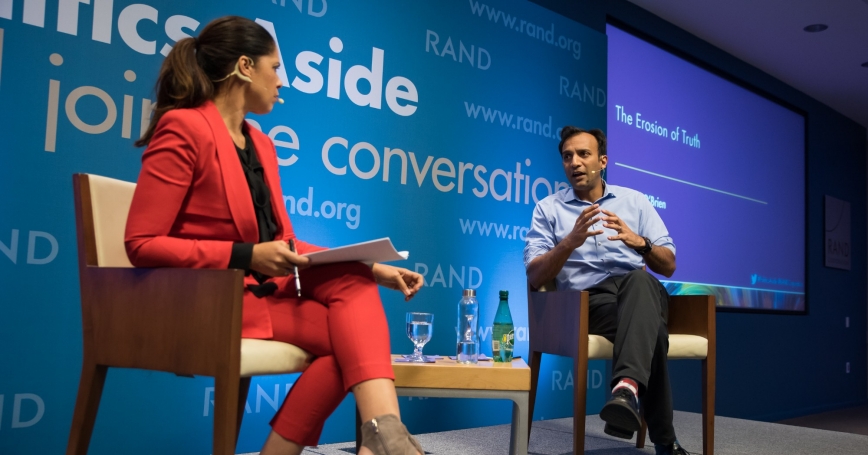 Policymakers should pursue efforts to assure that the array of data collected by the federal government benefits all Americans by improving the availability, reliability and transparency of the information, the United States' chief data scientist told a group Friday evening at the RAND Corporation in Santa Monica.

Encouraging a wide group of individuals and groups to use available government data can help create consensus about key challenges facing the nation, such as climate change, said DJ Patil, deputy chief technology officer for data policy and chief data scientist in the White House Office of Science and Technology Policy.

“As more people look at it, it is harder to dispute the data … and it separates rhetoric from actual policy,” he said during the opening night of RAND's Politics Aside, a two-day gathering that brings experts, policymakers and others together for a nonpartisan discussion about the top policy issues for 2017 and beyond.

In a discussion with journalist Soledad O'Brien, Patil highlighted an example of how data science may help reduce the number of Americans who cycle through the nation's 3,100 jails each year.

It's been widely known that many of the 11.4 million Americans who spend time in jails each year suffer from mental illness. Officials in Miami-Dade County tested the observation by comparing the names of those who were cycling through the jails with records of people who sought help in the region's health care system. Many of the names matched.

So police committed $1 million to train officers in crisis intervention techniques and emphasized getting troubled people the help they needed. The result was a decline in the jail population that saved more than $10 million in one year and allowed officials to close an entire jailhouse.

Patil said the challenge now is to see if the approach can work in other jurisdictions and, if so, scale the methods to be used broadly across the United States.

He said he was hopeful that the new presidential administration would continue the data improvement movement that started under President Barack Obama. His office has put together briefings for the new administration explaining the rationale for the effort and he said there are plenty of skilled data scientists ready to take over when he and his colleagues step down from government service.

One challenge Patil put forward for RAND and other institutions is to begin thinking about how to incorporate the study of ethics into the training of data science professionals.

Most people would not want to be treated by a physician who was not grounded in ethics. There should be similar concern about those who handle important data. The issue will become even more important as new technologies such as artificial intelligence come into wide use, creating new concerns over ethics and privacy.